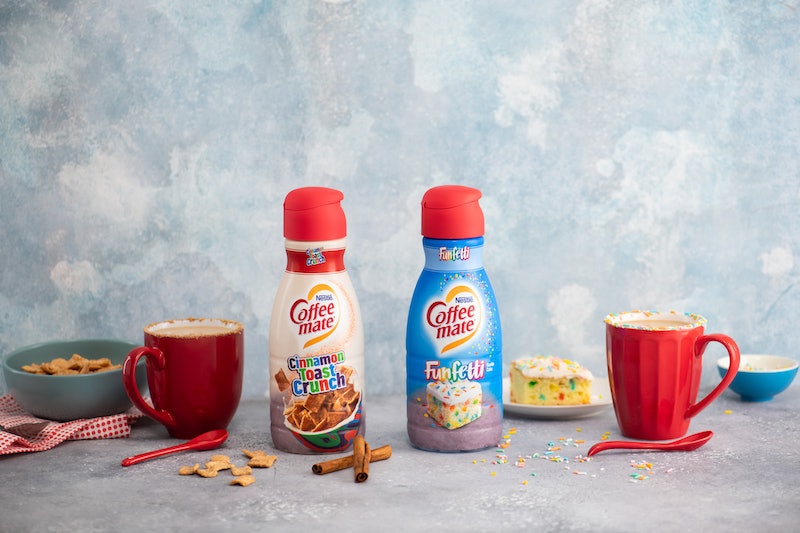 If you’re someone who likes a little cream in their coffee — or, if we’re being honest, just a little coffee with their cream — this is the coffee news for you. Starting in the new year, Coffee mate will have Cinnamon Toast Crunch and Funfetti creamers available at your caffeinated whim. They’re sweet! They’re nostalgic! They’re what your childhood self would want you to have in the morning! Both of Coffee mate’s two new flavors will be coming to shelves starting January 2020. In the meantime, let’s talk delicious details.

Coffee mate Cinnamon Toast Crunch creamer is, as its name suggests, a creamer flavored with your favorite breakfast cereal. It combines cinnamon, brown sugar, and hints of toasted cereal. According to an emailed press release, it “tastes like the best of the 'cinnamilk' left in your bowl.” In terms the more adult palate will understand, the Coffee mate Cinnamon Toast Crunch creamer likely tastes like Rumchata sans rum.

Pair it with your afternoon coffee. Add it to your spiked hot chocolate. If you want to go absolutely buck wild, put a splash in your morning cup while you’re also enjoying a bowl of Cinnamon Toast Crunch. It’s cereal with a side of cereal! The breakfast of champions who also love cereal!

Assuming all the breakfast purists haven’t already left the chat, they’re going to want to avert their eyes now. Get out of here, “eggs have to be part of breakfast.” See ya later, “breakfasts must be savory.” We’re about to talk about breakfast cake.

Coffee mate’s Funfetti creamer is like cake in a cup. With hints of vanilla, cake batter, and sweet frosting-like notes, it is the excuse to have cake in the morning you have been looking for since you were a child. As the press release states, “all that’s missing are the birthday candles and sprinkles.” Honestly? If you want to put sprinkles in your coffee, top it off with whipped cream, and stick a candle in it, more power to you. You’re an adult. You get to decide what breakfast is now.

Both Coffee mate’s Funfetti creamer and the Cinnamon Toast Crunch creamer will be sold in 32 oz.-bottles for $3.99. Come the new year, they will be available at grocery stores and mass retailers nationwide. Like anything else labeled “Funfetti” or “Cinnamon Toast Crunch,” I anticipate these being more popular than your average french vanilla creamer. So, you’ll probably want to grab a bottle or several when you see them.

If you need further proof that there is a coffee creamer in just about every flavor, look no further than Coffee mate’s Red Velvet creamer. And if you had any further questions about whether cake is indeed a breakfast food, I suppose you have your answer.