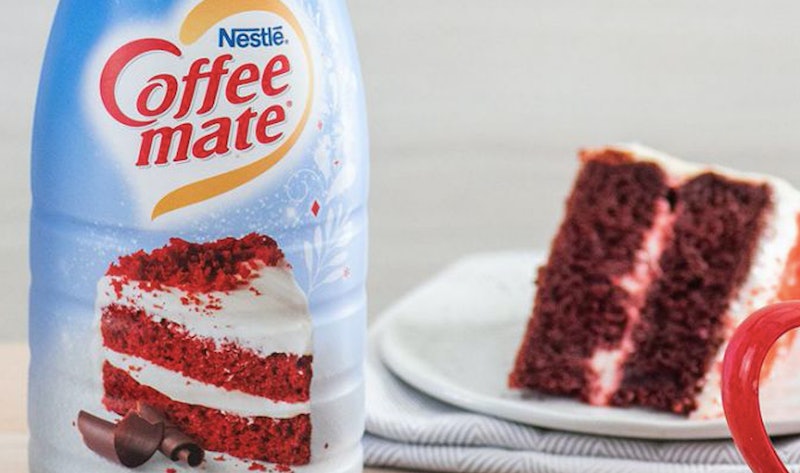 One day, a day that I hope is in the near future, we'll be able to start every morning by shoving an entire piece of cake into our coffee and blending it into something heavenly – and topped with frosting. But for now, that dream remains out of reach. Luckily, there's Coffee-mate Red Velvet Coffee Creamer on the way, which is probably the closest my dream is going to get to coming true for the time being.

Seriously, if you like your coffee to taste like a gosh darn party in your mouth, then this is the way forward. Spotted by Instagrammer @CandyHunting, this is due to be released as part of the Coffee-mate fall season, according to both that post and according to Yahoo News. This is delightful for a number of reasons — first of all, coffee and cake are an epic combination that doesn't get enough attention.

Secondly, red velvet is a king among cakes and simply not enough people give it the attention it deserves. (There's cream cheese in the frosting, people.) Although to be honest, this has me thinking about skipping the middle man and just mixing cream cheese frosting directly into my coffee. But if that's a step too far for you, that's OK. That's why Coffee-mate Red Velvet is here — to help you work up to the frosting-in-coffee combination. Your fall is going to get so much more delicious.

Of course, Coffee-mate is no stranger to taking entire desserts and compressing them into delicious creamer form. In the past, they've delivered Cheesecake Factory coffee creamers, which is proof they are willing to go in with their dessert-based flavors. They've also delivered Snickers coffee creamer, which was a personal dream of mine (and yes, I was just stirring my coffee with a full Snickers bar until it became a reality). If you're looking to stay dairy-free, then fear not — they have you covered there, too. Coffee-mate Oat Milk Creamer made a debut earlier this year — and, yes, it's still delicious.

It seems like there's a bit of a creamer craze happening at the moment — and it's not just Coffee-mate getting in on the action. I was particularly taken by the International Delights S'mores Creamers, because we should always have more s'mores, especially in the summer. But Starbucks made big waves this week when they came out with their new additions to the creamer game. You'll now be able to get Starbucks creamers in grocery stores, which is a total game-changer. They've got a Caramel Creamer, a White Chocolate Creamer, and a Cinnamon Dolce Creamer on offer. That's right, cinnamon dolce. And it's based off of their delicious Cinnamon Dolce Latte, so just take a moment to soak it all in.

The world of coffee creamers has expanded to fit all of our delicious, dessert-based needs. Leave the black Americanos and the cold brew to the hipsters — I want half coffee, half red velvet cake, and I want it now. But until I finally get to start every day with a cake-coffee hybrid for breakfast, I can have red velvet coffee creamer. And that's something we should all celebrate.

More like this
16 Trader Joe's Appetizers That Are Total Party-Pleasers
By Kaitlyn Wylde
Dolly Parton Released 4 New Baking Mixes With Duncan Hines
By Alexis Morillo
An Expert Weighs In On The Viral Raw Carrot Salad Trend
By Alexis Morillo
Do Green Powders Work As Well As TikTok Says They Do?
By Carolyn Steber
Get Even More From Bustle — Sign Up For The Newsletter
From hair trends to relationship advice, our daily newsletter has everything you need to sound like a person who’s on TikTok, even if you aren’t.