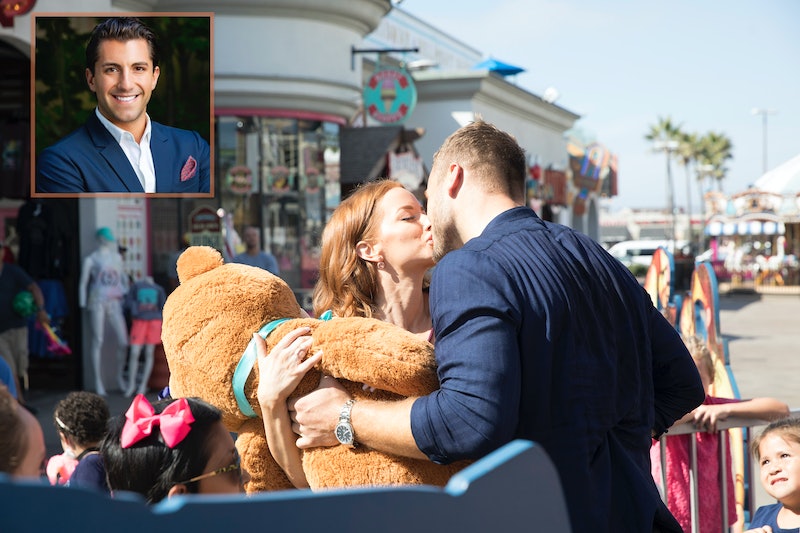 While competing on Becca Kufrin's Bachelorette season, Jason Tartick experienced love and heartbreak on national television. Now that he's been through it all, he has plenty of words of wisdom for new contestants, and he's dishing all to Bustle. Read what Jason has to say about the Hannah/Caelynn pageant drama, Elyse's one-on-one, and more in this week's recap.

Episode 3 made me laugh, sigh, and, no joke, even cry. At the risk of sounding too dramatic, this episode was absolute mayhem, which in full transparency is why I laughed often, sighed frequently, and actually had a few tears roll down my cheeks. As a former Bachelorette suitor, watching an episode filmed in the Mansion is sensory overload, and it got me feeling nostalgic. I don’t miss the twin size bunk beds, the chorale of snoring from the guys come nighttime, and the constant fight for one-on-one time. But I do miss the camaraderie, the excitement of expecting the unexpected, the Jordan model walk-offs, and of course the array of delicious food options! Moreover, I wasn’t surprised that this episode made me laugh and sigh, but I am shocked that I actually did cry. Let’s break it down.

In my opinion, the MVP of this episode goes to Elyse. Elyse carried herself with poise, confidence, and class during her one-on-one date with Colton. All forms of Elyse’s communication exemplified maturity. She was adorable in the manner she communicated with the children, she was sweet in how she expressed her feelings to Colton, and she was vulnerable in explaining the devastating loss of her sister, which has shaped her into the person she is today. Her story about her sister was so tragic and had me in tears; kudos to her for being so strong through everything and in that moment. After a less than impressive one-on-one date with Hannah B., it was refreshing to see a date like this one.

I sincerely feel sorry for Hannah B., because my instincts tell me there’s another side of her that hasn’t been showcased. It seems as though she has become so lost in the back and forth bickering about Caelynn and their pageant history that she's lost sight of her relationship with Colton. Colton has said over and over that he has feelings for her, and this tells me there’s more to Hannah B. than the disarray we’re witnessing. Yet I feel like perception is reality in that she just can’t move past her competitive instincts with Caelynn, thus deterring her from focusing on her relationship with Colton.

I have to credit Caelynn for the way she handled this controversy. She dealt with the issue when it came up, but has taken advantage of her time with Colton to make their relationship her priority. #TeamCaelynn.

Also, It was disappointing to see Caitlin go home in the manner that she did. I credit Colton for being decisive through this enduring process. That said, I do agree with Caitlin when she expressed that her time was cut too short and that her intentions were more genuine than some of the others. Lastly, Colton gave her a perfect opportunity to deepen their relationship by sharing more about herself, and she totally flubbed it, sparking yet another sigh of frustration!

It was an unpopular reaction, but when Jordan pulled off the stunts that he did on our season, I always found it funny. While others were frustrated, I was finding humor in his nonsense. In full disclosure, I can’t say I was laughing with him, but I was laughing. Demi, while certainly abrasive, I find at times to be funny. Her blindfolded paddle “game” was so outrageous I was just laughing! Maybe it was because Colton's reaction was hilarious, but I found it to be funny. Amid all of this mayhem, I believe Colton finds his time with her stress-free and humorous. The humor and assertiveness is a solid short-term strategy for sticking around, but is it sustainable?

The Hannah B. “hiss” that was played in the trailers over and over will also live in Bachelor Nation infamy...

While I can't believe we're actually still referring to 27-year-olds as “cougars," the whole “cougar den” reference is so ridiculous it’s actually funny.

We're only three episodes in, and I guess my reactions of crying, sighing, and laughing just prove once again that Chris Harrison is correct — it really is the most dramatic season ever.