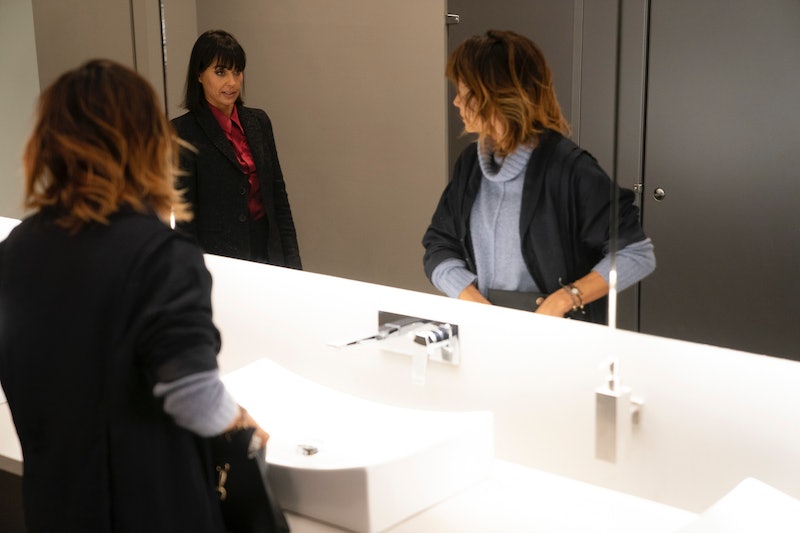 A Million Little Things has been teasing the identity of Barbara Morgan, one of the benefactors of Jon’s life insurance, essentially since the show began. None of the characters know who she is, and most fans have taken that to mean one thing – the most recognizable featured actor, Constance Zimmer, whom you may know from shows like UnREAL, is Barbara Morgan. It’s the Law & Order rule: the most famous person on the episode is usually the one who did the crime. But on the Jan. 31 episode, viewers finally got some answers, and no — Constance Zimmer is not Barbara Morgan on A Million Little Things. Instead, she’s Councilwoman Jeri Huntington. Or, as Zimmer tells Bustle, a character that was “never on the radar.”

“I’m so sorry. That makes me so happy,” Zimmer laughs on a phone call when I tell her that I've been fooled, along with countless fans. “It really does. I’m sorry — I hope it doesn’t make people mad. What’s great is that all will be revealed.” Just not yet. But there is a plan, and there has been all along. According to Zimmer, this misdirection was an intentional partnering between herself and A Million Little Things creator DJ Nash.

“I knew DJ before working on the show, and he and I are friendly and are friends, and he approached me and said, ‘I have this really cool idea for this new show that I’m writing, but I need your help to pull it off,’” Zimmer explains. “That to me, as an actor, you love that, when a creator comes up to you and says, ‘Let’s do this together.’” Zimmer goes on to say that she’s been shrouded in mystery even from the cast and crew from the time filming began.

“I wasn’t able to tell anybody who I was, how many episodes I was in, what my storyline was… I was never a character name on the call sheet,” she says. “I was always just ‘mourner.’ I was never able to tell anyone… it was kind of fun, and I have to say, something I’ve never done, which is go and do one line and then ten episodes later, 'OK, is she the person that we all have figured out she is?' And then I’m not.”

Jeri may be a new person to A Million Little Things fans, but her presence has been felt before — the “Jeri” Jon was yelling to on the phone before his death wasn’t a man, but Zimmer’s character. She’s a councilwoman who tried to set up the subway zoning vote for Jon before he died, and she feels an immense amount of grief in not being able to help Jon. In some ways, Jeri feels responsible for Jon’s death, even though she wasn’t a big part of his life.

“Business relationships can become very personal,” Zimmer says, “And they were calling each other's cell phones and he was pleading with her to do stuff that was illegal. And so, I think it definitely was more for him and out of his desperation which is why the guilt that she felt was so much stronger.”

Delilah and Geri meet in the bathroom of the city council meeting, and though Delilah doesn’t really know who Geri is, Delilah tells Geri she can’t feel in any way responsible for Jon’s death. Delilah has mourned and learned enough to know that Geri has to let go. This, Zimmer says, is a huge step for Delilah in her grieving process.

“The scene in the bathroom feels very pivotal for Delilah’s character and the realization of how she’s moving on and finding her own strength and finding her own voice and the things that are going to help her in future with her own family,” Zimmer says. “I’m glad that’s kind of what Geri also represents, instead of another mystery character is revealed kind of thing. It opens a box for Delilah that maybe we haven’t seen yet as the audience.” She's got a point.

Delilah’s decision to sell the apartment buildings is the first big decision she makes post-Jon’s death and her first step into putting her family back together. There is, of course, still one question — who is Barbara Morgan, painter of Cambridge scenes and beneficiary of Jon’s life insurance? Zimmer, of course, knows the answer.

“I do know who she is! But I’m not gonna tell anybody. It’s really cool, I have to say. The payoff is gonna be worth the wait,” she says.

Zimmer was mum on how many more scenes she has for the season and how and if Geri will feature into the back half of A Million Little Things, and she says it’s all part of the fun of a mystery television show.

“That’s what keeps you watching, because if you give all your answers, it’s like showing your hand in a card game,” Zimmer says. “You don’t want to show your hand! You have to keep people guessing and coming back and wanting to play the game.” Again, it's hard not to see her point. So far, the best part of Million Little Things has been all of the twists and turns. But it would be nice to have some more answers soon.