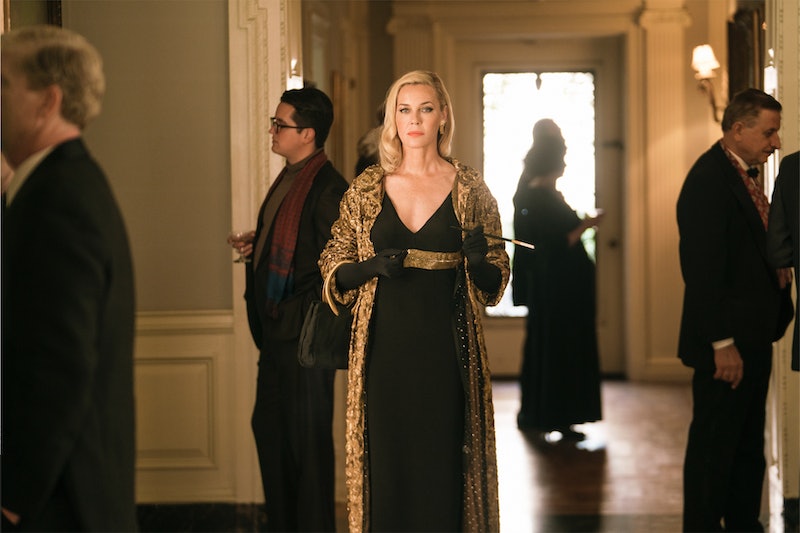 With only one episode left of I Am the Night, Fauna has finally found out the truth about her heritage. George Hodel's ex-wife unknowingly helped Fauna find her mother Tamar, but Corinna Huntington in I Am the Night still seems like she's got plenty of secrets. Wonder Woman actor Connie Nielsen, who plays Corinna, has called her I Am the Night character "pretty outrageous" on Instagram. And while that's undoubtedly true, like most other characters on the miniseries, she's based on a real person.

Corinna is the stepmother of Fauna's birth mother Tamar, and the series shows they had a complicated and fraught relationship. But while most of the characters from I Am the Night are based on real people and also share their real-life counterparts' names, there was no Corinna Huntington Hodel in real life. However, the character is still based on a real person in history. As The Hollywood Reporter noted in an interview with I Am the Night costume designer Rhona Meyers, the character of Corinna is based on Dorothy Huston Hodel, George's second wife and the ex-wife of movie director John Huston.

Huston is the father of Anjelica Huston, but Dorothy was not the actress' mother. Vanity Fair published excerpts from Anjelica's memoir, where she wrote that Dorothy was her father's first wife. Anjelica also discussed her father's sexual promiscuity and noted that she didn't learn until she was older that her father had been married three times before he wed her mother. She wrote that she first learned about his previous wives when she heard talk that Dorothy had become an alcoholic.

Most of the readily available information about Dorothy Huston Hodel (née Harvey) comes from her son, Steve Hodel. Steve wrote on his blog that Dorothy and Hodel had four children together — Michael in 1939, twins Steve and John in 1941 (John died two weeks after birth), and Kelvin in 1942. In a profile of Tamar, Du Jour magazine wrote that Tamar was born in 1935 to another Dorothy — Dorothy Anthony. As explained in the "George's Gift" episode of the companion podcast to I Am the Night, Root of Evil, Dorothy married Hodel in 1940, and to avoid any confusion with Tamar's mother, George nicknamed his new wife "Deroro." The podcast also noted how Hodel and Dorothy's ex-husband Huston were friends and shared an interest in the surrealist art movement.

On the podcast, which is hosted by Fauna's daughters Yvette Gentile and Rasha Pecoraro, they explain that Dorothy and Hodel divorced in 1946, but that Dorothy and their children continued to live with George at the Franklin House, which has been featured in I Am the Night. Steve wrote on his blog that his family lived at home from 1945 to 1950 — and he corroborates the rumors that Dorothy was an alcoholic.

Steve is a retired Los Angeles police detective and, as he writes on his blog and in his Black Dahlia Avenger books, he believes his father did kill the Black Dahlia and a number of other women. He also asserts that he thinks his mother knew about his father's alleged crimes. Steve and Kelvin (going by the name Kelly) discuss in the "George's Gift" episode of Root of Evil how they believe their mother feared their father. Though they say they never witnessed their father physical abusing their mother, one of the sons says he believed it occurred. Root of Evil also alleges that Dorothy and Hodel shared sexual partners and that when Tamar told Dorothy that Hodel had slept with her, Dorothy was the one who told her stepdaughter to flee the home.

On his blog, Steve has shared pleasant childhood memories of his mother as well, like how his mom would sing the same folk ballad to him and his siblings at bedtime once a week. Steve also claimed his mother worked as a script doctor on the 1948 film The Treasure of the Sierra Madre, which Huston wrote and directed. (Huston's father Walter also starred.) Dorothy is not credited, but Steve wrote that his mother and Huston had remained friends after their divorce and the director allegedly requested that his ex-wife fix the dialogue of the child character played by Robert Blake, since she was the mother to three boys. Steve also noted that his mother wrote for film and radio in the 1930s and 1940s, so she was artistic like her TV counterpart — just in a different medium.

While Dorothy is the basis for Corinna, the TV show has taken liberties with the character — just as it has with all of Fauna's story. But no matter how she is portrayed on I Am the Night, Steve called his mother "the most remarkable woman I have ever known" on his blog. So she is well-remembered despite the family's complex and often-shocking past. And you can keep following the Hodel's story — and possibly learn more about Dorothy — after I Am the Night wraps up, thanks to the family sharing their story on Root of Evil.