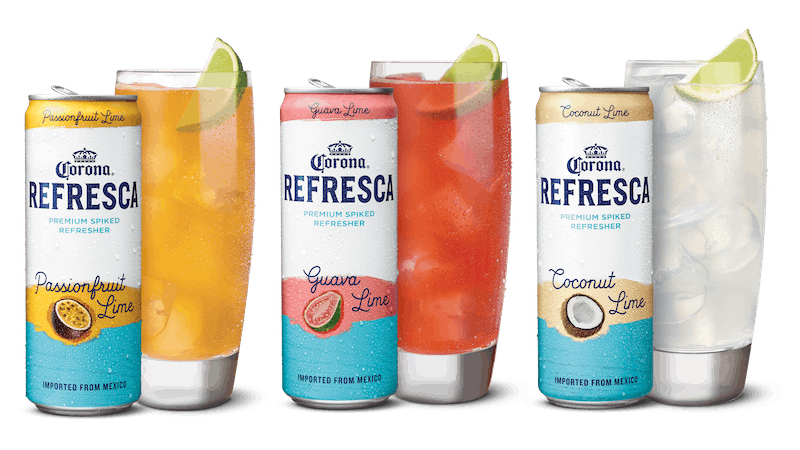 When you hear the word "Corona," you probably have some very clear images in your head. Its traditional bottle of a beer, probably with a lime wedge squeezed into the top of the bottle, has become a staple of summer drinking, especially for those who want to imagine a more exciting edge to their after-work happy hour. But now, in what feels like a bold choice, Corona is branching out in a way that makes you say, "Weird flex, but OK." Corona Refresca drinks are here and they seem to be dialing up that summer vibe.

What are Corona Refrescas? It took me a second to figure it out too, so don't worry. They're a type of "flavored malt beverage" and are aimed at giving non-beer drinkers a chance to enjoy the Corona flavors. They come in at a 12-ounce serving with 4.5 percent alcohol by volume and are sold in handy little cans, perfect for taking them on-the-go (though not drinking on-the-go, obviously). And the cans, like most canned drinks that have preceded it in the last few years, are highly Instagrammable.

What can you expect, flavor-wise? Well, there are a lot of different tropical options, each with a lime twist — fitting for the Corona brand. "Corona Refresca brings the flavor and the feeling of the tropics to you," its website explains. "It’s a premium, alcohol-spiked refresher available in Passionfruit Lime and Guava Lime. Crisp, flavorful, and not too sweet, it’s the taste of the tropics imported from Mexico." There is also a Coconut Lime flavor that comes in a 12-pack with the other two, but isn't available on its own — which is weird, because the classic coconut-lime combo is basically the definition of a winning summer flavor. The Passion Fruit Lime and Guava Lime are both available in 6-packs for $9.99, while the 12-pack is set to be available at $16.99. You may be bringing them to a summer house party before you know it.

Ever since the explosion that was LaCroix, lighter drinks options have been having a bit of a *moment*. People want lighter, fruitier options, even when it comes to alcoholic drinks that can sometimes feel heavy or too sickly-sweet. So it's probably no surprise that we're seeing big-name brands expanding into that market — though the internet is mixed on their initial responses to the Corona Refrescas, so we'll have to see if they take off.

With storms still hitting all around the country and shelves still full of Easter candy, it's hard to imagine that summer is actually dawning any time soon — but summer will come, eventually. With Target inflatable pools already on offer and Pearsecco becoming a thing , there are definitely some summer vibes starting to float around and it's nice to be able to see the emerging products and have a little bit of summer hope. I may be saying this as some of us are surrounded by four-foot snowbanks, but pretty soon a change is going to come. Whether or not Corona Refrescas will be your summer beverage of choice remains to be decided, but expect to see more summer-inspired flavors heading your way, because we're just getting started.