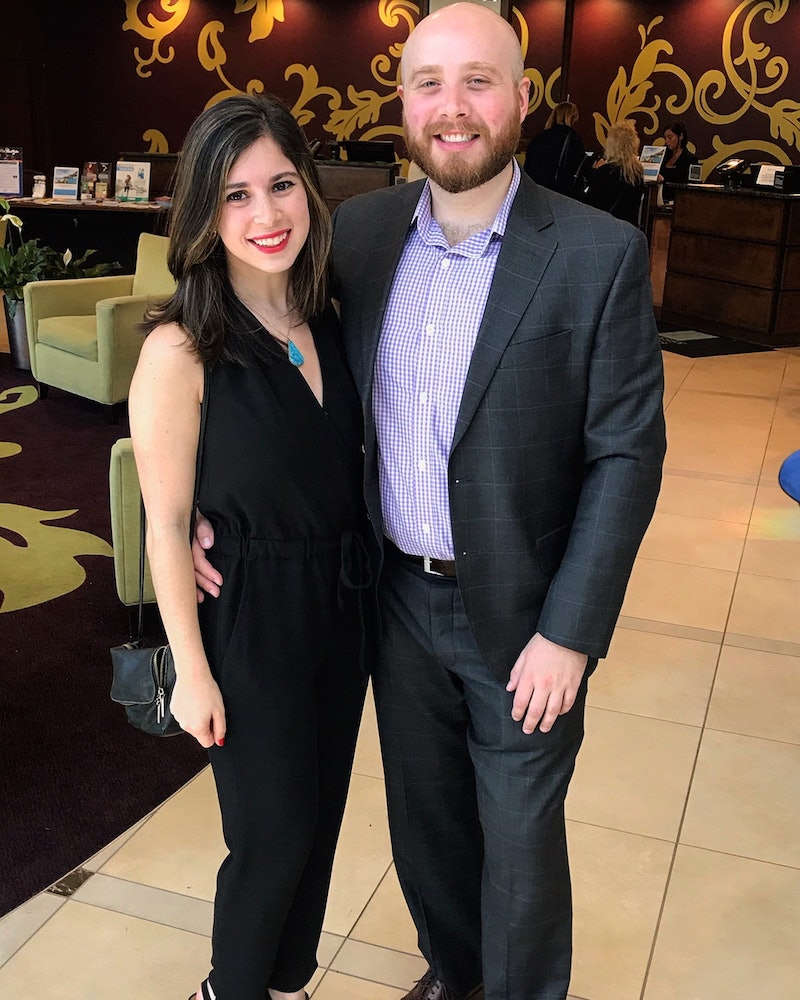 It was hard to hear anything over my crying. I could vaguely make out the sound of our therapist's words — are you OK? How does what Kurt just said make you feel? — but all I could do was sob. Kurt, my boyfriend, had just announced that despite months of trying to convince himself to feel otherwise, he truly never wanted to have kids. We wouldn't break up for another two months, but when he uttered those words, our relationship was, in effect, completely over. And I was a mess.

It's not that Kurt's statement came as a surprise. After all, our different opinions about eventually having kids — I wanted them one day, he didn't — was the reason we were in couples counseling to begin with. In all of our sessions over the last five months, as well as in many of our conversations outside of therapy, we'd discussed the inevitability of a split; yes, we were only in our 20s, but we knew that the longer we stayed together, the harder a breakup would be. I'd geared myself up as much as possible, going to therapy on my own and talking it out with loved ones, but still — nothing truly prepared me to hear in that appointment that Kurt's mind hadn't changed about kids, and our relationship was going to have to end. Couples therapy, for all our hope and all its promise, hadn't saved us.

When Kurt and I started couples counseling back in fall 2017, we knew there was no guarantee it'd "work," if you define "working" as stopping us from breaking up. As I wrote about back in March 2018, we tried to view therapy more as a tool to help us communicate our feelings about and process our inevitable end, rather than a solution for our situation, since Kurt had made it clear from the get-go that his feelings about kids were unlikely to ever change. That said, it was impossible for both of us not to hold out hope that going to therapy would result in him reconsidering his beliefs and, thus, us not having to split. How could we not feel that way? We were happy and in love; we so badly wanted our relationship to work.

And besides, couples therapy, up until that last appointment, seemed to be moving us in the right direction — or perhaps that's just what I convinced myself. While we talked about other subjects like our different upbringing and communication styles, our appointments mostly focused on our thoughts on having kids one day, and it felt to me like Kurt was making real progress unpacking some of his reasonings for not wanting them. And outside of our appointments, we were making moves towards the future, planning vacations and looking at apartments, hopeful that we had a chance.

But as it happens, reality hit — hard. Although therapy did help Kurt understand more about his thought process on wanting to be childfree, it didn't change his mind on the matter. So slowly, we stopped touring apartments and put vacation plans aside. We went to that last couples appointment, where Kurt's admission made it clear things were going to have to end. I cried, a hell of a lot. We broke up.

And then, a month later: we got back together. A lot happened during those four weeks, but the TL;DR of it all is that I realized that I had never given my own thoughts about having kids the same consideration that Kurt had for his, because it hadn't occurred to me that I should; after all, according to our culture, his feelings were the "abnormal" ones, not mine. As such, I had convinced myself that he was the only one with the potential to change, so shamefully, I hadn't bothered to analyze my own feelings with any real depth.

Yet when I did begin to think about it intensely — spurred on in large part by a brilliant book I read during our split, Sheila Heti's Motherhood, all about a woman's decision whether or not to have kids — I discovered that, to my surprise, a childfree future actually sounded not half bad. And after a lot of talk with my loved ones, individual therapy, and careful consideration of my own to make sure that a) those feelings were real and b) they weren't just because I wanted to be back with Kurt, I told him how I felt.

Before long, we decided to give our relationship another go. Both of us were thrilled to be back together; now that we no longer had an expiration date looming ahead of us, there was so much we could do, like move in together and adopt our dream dog. But despite our happiness, Kurt was, understandably, still hurt by and cautious of my sudden change of heart. He needed reassurance I wouldn't regret the decision not to have kids down the line. I was also cautious, worried that even though I felt certain in my decision, I couldn't rule out that I'd still one day change my mind. I wanted to talk out my reasoning with someone impartial, who'd reassure me or call me out if I sounded less than convinced. So, about two months after our last appointment, we went back to couples counseling.

This time around, therapy was a lot different. For one thing, there was much less crying. For another, a massive weight — the impending end of our relationship — had been lifted, so our conversations felt lighter than they had in the past, even when they were about difficult topics. Staying in the city versus buying a house, needing alone time versus wanting company — we talked each issue out with ease, because, well, we'd already gotten through the worst and we knew we could handle whatever else came our way.

But more than that, we knew how to talk about them. In the five months we'd gone to couples therapy pre-breakup, we'd worked hard on our communication skills, learning to chat out problems before they turned into anything bigger. And going back to therapy after our split only emphasized the importance of this practice. The first few months after getting back together could've been an emotionally fraught time, full of anger (from him) or worry (from me) that might've broken us apart again. But because we had been taught to let each other know whenever we were feeling off, that never happened. Instead, we grew stronger with every passing week.

It's been nearly ten months since we got back together, and we still go to couples therapy — not as often as in the past, but every once in awhile, when we feel like we want a relationship check-up. We don't talk about the kids thing as much as before, since it's now relatively far in the past, but we do talk about anything else that bothers us or is causing tension. It's rarely much, since we tend to chat things out beforehand and not let issues escalate into full-out fights, but as we've learned, it never hurts to have a moderator weigh in.

I know we're lucky to be able to go to therapy. Our insurance covers the cost, so we're left with only a small co-pay each session. We have jobs with hours that let us make evening appointments, and if we ever need to switch therapists, there are a number of others available in our area for us to try out. Therapy isn't an accessible or affordable option for everyone, I know — but according to Anita Chlipala, a licensed marriage and family therapist in Chicago, there are ways to enjoy the benefits of couples counseling even if you can't go yourself.

"Couples should check in at least twice a year about any potential threats to the relationship," Chlipala tells Bustle. "Some questions to consider: Am I finding a coworker or friend attractive or interesting, where before I didn't notice them? Am I drawn to anyone more than I should be? Am I keeping any secrets from my partner?"

Getting into fights and having miscommunications are "inevitable," Chlipala says, but "when you have hurt each other, repair the damage. Have a conversation, accept responsibility, apologize, or do something nice for your partner... Make it a point to make sure your partner knows that they matter to you." This is important, Chlipala adds, not only in "times of stress or trouble" but when things are going well, too, in order to "create security and reassurance that will deepen your connection and strengthen your relationship."

I can't agree enough. These days, I get asked a lot about therapy, typically from people who've read my articles about it and are thinking of going to sessions with their own partners. They're usually nervous, but hopeful, saying something like, I saw how it helped you guys, and I think it'd be good for us, too. What makes me happiest about these messages is that these people generally aren't looking to "save" their relationships or have all their problems "fixed" by counseling. They know that's not how it works; if you're judging by that metric, therapy would've been deemed a failure for me and Kurt, since we broke up. But neither of us would ever view it like that, since without couples counseling — both our sessions pre-split and afterwards — we wouldn't be as strong a pair as we are now, or communicate nearly as well.