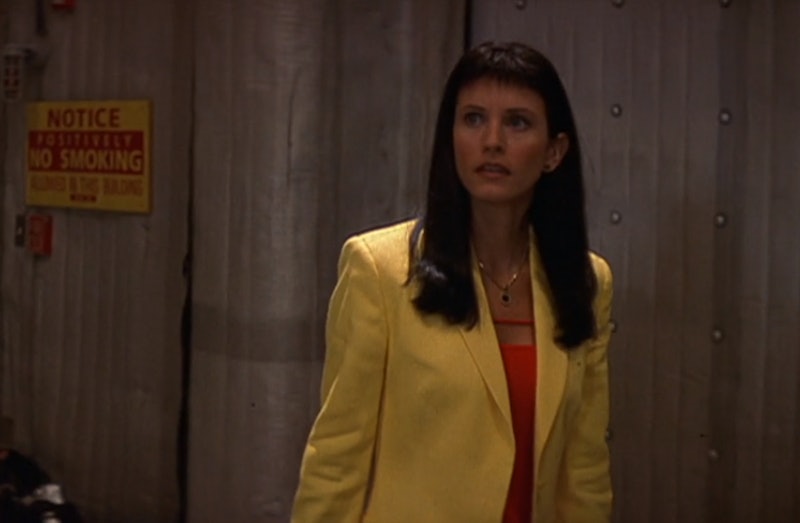 Gale Weathers was relentless with her reporting, and she could take down a bad guy while tossing off a snarky remark, but her hairstyle choices were sometimes questionable. No one knows that better than Courteney Cox, who paid tribute to Gale's Scream 3 bangs on Halloween with a video on Instagram. In the video, Cox, who played the intrepid reporter in all four Scream films, settled in to watch the third installment of the franchise and discuss her character's infamous look.

Throughout the series, Gale's hairstyles evolved, but her super short bangs in Scream 3 were a bit of a devolution. Recently, comedians and Twitter users have been cracking jokes about Cox's early '00s look on social media, and the actor seemingly responded with a devilishly fun Halloween post. In her video, the Friends actor defended Gale's bangs. "I don't think anything's that wrong with it, check it out," she said of the style. "I think they're cool. I say I can bring it back. Let's see."

Cox proceeded to cut her bangs on-camera — or at least she made it look that way. In all likelihood she used a wig to pull off her Halloween prank, but seeing her lop off her hair is still chilling. Her impromptu haircut is just part of the fun; check out her full video below to see how the rest of her Scream tribute played out.

In January, Cox discussed Gale's Scream 3 look with People, and she shared that her botched bangs taught her the importance of advocating for herself. "I did not stick up for myself and hence I look horrible," she told the outlet. "That was a big lesson — take care of yourself."

On the bright side, Cox didn't actually have her bangs cut that short in real life. She told People that the style was created using a hairpiece rather than her real hair. Even though she didn't have to deal with waiting for her hair to grow back out, she still regrets not speaking up about Gale's look. "The fact that people say 'forever on film,' that is really true and it's so bad," she said.

Gale's bangs from Scream 3 may still haunt Cox, but at least her Halloween video shows that she has a sense of humor about her character's hair disaster.

More like this
'Abbott Elementary' Fans Probably Missed This 'Parent Trap' Easter Egg
By Sam Ramsden
12 Years Ago, Austin Butler Manifested His Oscar Nom In This Disney Movie Scene
By Jake Viswanath
Sandra Bullock’s Razzies Speech Proves She’s The Ultimate Miss Congeniality
By Sam Ramsden
Anne Hathaway Shared A "Thrilling" 'Princess Diaries 3' Update
By Darshita Goyal
Get Even More From Bustle — Sign Up For The Newsletter
From hair trends to relationship advice, our daily newsletter has everything you need to sound like a person who’s on TikTok, even if you aren’t.