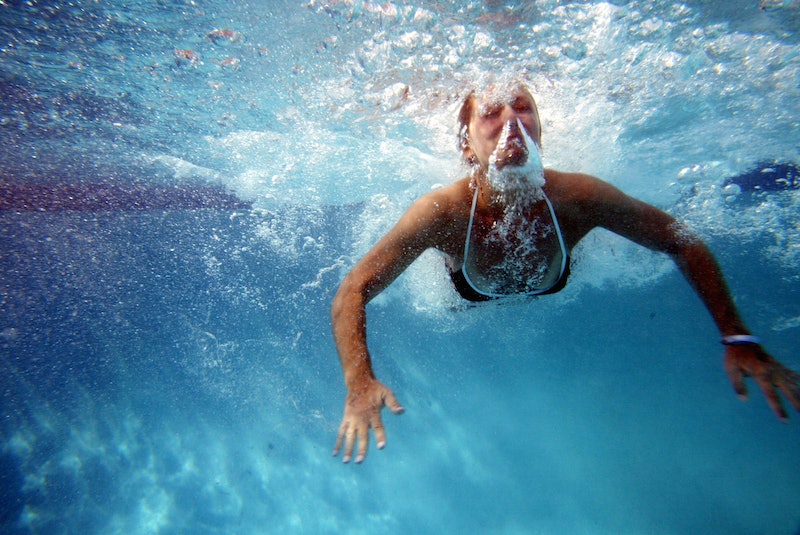 You know those signs posted at swimming pools that advise you not to swim if you have active diarrhea? Avoiding pools when you have the runs is not just a suggestion. The U.S. Centers for Disease Control & Prevention (CDC) released a new report about the increase of cryptosporidiosis outbreaks in swimming pools and child care facilities. Crypto what? Cryptosporidiosis, commonly known as crypto, is a parasite that can live in the intestines of humans and animals and cause weeks-long watery diarrhea, the CDC noted. It's mostly commonly transmitted through water, usually in treated swimming pools.

When I was a lifeguard in college, I can't even count the number of times we had to close the pool because of poop — usually from toddlers who weren't wearing swim diapers. Other times, we arrived in the morning to find that teens had jumped the fence during the night and pooped in the pool as a prank. Whenever we had a poop crisis, we generally only made swimmers stay out of the water for an hour or two while we ran a new cycle of chlorine and tested the water.

However, the CDC warned that crypto can live for several days in treated water. But before you vow to stay on dry land all summer, it's important to know that crypto is not as common as widespread news coverage of this report would make it seem.

From 2009 to 2017, 444 crypto outbreaks were reported in 40 states and Puerto Rico. This resulted in 7,465 cases of crypto, most likely from swallowing contaminated pool water. Though there has been a 13% increase per year in the number of reported crypto cases, the CDC said the higher numbers could be the result of new testing technology. This means there aren't necessarily more cases, just more cases the CDC knows about. Half of the reported outbreaks occurred in the Great Lakes region, but the CDC said more research is necessary to determine why.

Using public swimming pools always comes with some level of risk because you don't know the health and hygiene habits of the other swimmers. The Water Quality & Health Council conducted a survey that found that 51% of people in the U.S. use pools as communal bathtubs. In addition, 24% reported going swimming one hour after having diarrhea. If you spend a lot of time in public pools, even those at hotels and apartments, and you're super grossed out, you can order a free pool test kit to check the water quality yourself.

Coming into contact with infected children at child care facilities and not washing your hands after touching cattle account for the second and third most common forms of crypto transmission, after swimming pool water. According to the CDC, pregnant women, young children, the elderly, and those with compromised immune systems are most at risk for crypto.

Only one death was reported from an outbreak at a hospital. And while crypto isn't common, it does sound hella uncomfortable. If you want to reduce the chances of having your summer fun sidelined by diarrhea, don't put pool water in your mouth. If you change a diaper, wash your hands ASAP. The same goes for rubbing barnyard animals at petting zoos and animal sanctuaries. And if you're into goat yoga, you might also want to be into vigorous hand washing.