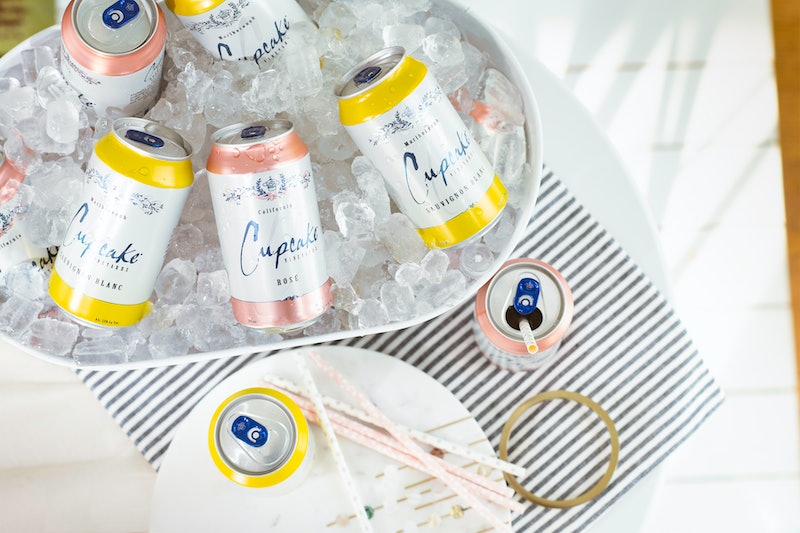 Excellent news for anyone who’s eagerly anticipating spring and summer picnics: Cupcake Vineyards just launched two new canned wines. They’re here just in time for both the arrival of warmer weather and a notable, outdoor, warm weather event — the one that usually kicks off music festival season: Coachella. In fact, Cupcake will be returning as Coachella’s official wine sponsor for the fifth year in a row. Accordingly, the new cans have made their debut to celebrate this five-year collaboration; they’re available in stores as of April 1, and will be among the many beverage offerings festivalgoers will be able to enjoy at Coachella 2019 once it begins on April 12.

“We are honored to be the first-ever beverage in a can available at the festival in Coachella history,” said Eben Gillette, Vice President of Marketing for Cupcake Vineyards, in a press release provided to Bustle. “Our cans are the perfect portable, shareable, and unbreakable solution to enjoying delicious wine outdoors, so there’s no better place than Coachella to show festival-goers a new way to enjoy Cupcake wine.”

Cupcake Vineyards originally launched in 2008 and quickly gained a reputation for having fruity, enjoyable-to-sip wines available at affordable prices. (If you’ve never had the Red Velvet red, you have not lived; it’s like dessert in a glass.) They’re now a part of The Wine Group, whose portfolio also includes brands like 7 Deadly Wines, Benziger Family Winery, and Fisheye Winery.

More than a decade on, Cupcake now offers seven whites, eight reds, two rosés (one of which is sparkling), and two sparkling whites. The reds and bubbles are still only available in bottles — but one white and one rosé have both now made it to canned format. The Sauvignon Blanc is described as a “vibrant, crisp wine” made with grapes hailing from New Zealand’s South Island; its notes include Meyer lemon, white nectarine, key lime, grapefruit, gooseberry, and citrus. The Rosé, meanwhile, is a California coast wine, with flavors of watermelon, strawberry, and white nectarine making it “a delightful complement to a warm, sunny day.”

At 375ml, each can is roughly the size of half a bottle of wine and holds about two and a half glasses of the stuff. (A standard bottle is 750ml, while a standard pour is 150ml.) They retail at $5.99 each. That’s about half the cost of a regular bottle of Cupcake wine; for reference, the rosé is typically around $13 on Wine.com, even though it’s on sale for less right now. The cans also each come emblazoned with Cupcake’s farmhouse-chic style of label, which somehow manages to feel classy and elegant, yet casual and comfortable at the same time.

The popularity and prevalence of canned wine has been steadily growing for the past several years. According to alcohol market research firm BW 166 LLC, sales of wine were pretty flat between June 2017 and June 2018 — but sales of canned wine rose a whopping 43 percent. What’s more, despite the fact that canned wines are still only about two percent of total wine sales, “that two percent… [still] represents a lot of sales,” as Jeanette Hurt pointed out at Forbes at the end of 2018. Thanks to the fact that it’s doubled just about every year since 2016, canned wine is a roughly $50 million business now.

As a wine packaging format, cans actually have a number of advantages over bottles. As Matthew Allan and Kenny Rochford of Pacific coast winery West + Wilder noted to Decanter in 2018, cans are more environmentally friendly; not only do they have a lower carbon footprint, thanks to the reduction in weight, but they’re also easier to recycle more efficiently. They can also be chilled faster — hence why whites, rosés, and sparkling wines tend to do so well in the format — and there’s no danger of light or air getting into the receptacle while they’re still sealed.

More than anything else, though, the portability of cans gives them the biggest boost over bottles: They’re easy to take to picnics; you can enjoy them by the pool or at the beach (depending on your local liquor laws); you don’t have to worry about dropping and breaking glasses; and they’re easily disposed of when you’re done, thanks to that whole efficient recyclability thing. In that sense, it’s no surprise that canned wines would begin making their debuts at places like Coachella — they’re ideal for music festivals.

Canned wine is the only thing Cupcake Vineyards have up their sleeve for Coachella 2019, though: The Cupcake Vineyards Frozie Factory will also be making its debut. A portmanteau of the words “frozen” and “selfie,” a Frozie is kind of like the wine slushie version of a “selfieccino”; your drink will come with an edible selfie of your own face on top, courtesy of some fancy-schmancy beverage printing technology. The Frozies will be available in two flavors: Rosé and Sauvignon Blanc Bellini.

If you’re not going to Coachella this year, however, you can still get a hold of Cupcake’s new canned wines at regular ol’ retailers. To find out where the cans are available near you, check out Cupcake’s online product locator — or just order ‘em online. Cheers!