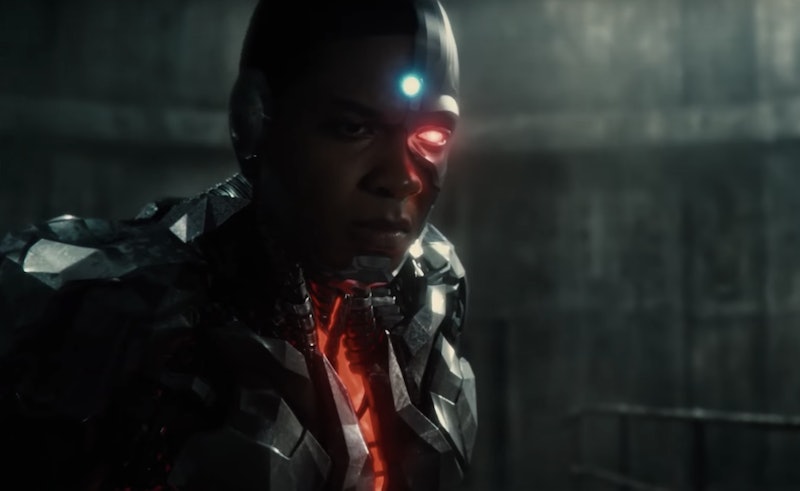 I was hoping it wouldn't have to come this, but I'm afraid it has. Cyborg's absence in the latest Justice League photo is yet another noticeable absence since the Comic-Con trailer dropped over the summer; it may be indicative of how much screen time he will have and, as a result, a clue that he may get unfairly sidelined in the film. While I have no way of confirming whether or not this is true, we need only to recall previous 2016 DCEU releases — Batman v. Superman: Dawn of Justice and Suicide Squad — to know that those trailers focused on Superman, Batman, and Harley Quinn, respectively; they were also the primary focus of their films.

While Aquaman and The Flash get snappy introductions during the three minutes of Comic Con footage —and around a minute of combined screen time — Cyborg appears for approximately 10 seconds. I kid you not. Unless you're familiar with the DC lore and you know who Cyborg is, then you'd be hard-pressed to understand why a teen who is half-robot would be talking to Batman. It's also unfair, especially after the limited introduction Cyborg got in Batman v. Superman: a short cameo when Diana Prince was looking through Lex Luthor's secret files and found a recording of Cyborg's father trying to create him.

Which brings me back to the photo that was released on Tuesday. The photo shows The Flash, Batman, and Wonder Woman staring off into the distance, tense and ready to fight. You can argue that Aquaman's exclusion cancels out the irksomeness of Cyborg's if it weren't for the aforementioned Comic Con footage and the existence of Aquaman's standalone film which is currently filming (yeah, Cyborg doesn't have one of those either).

I'm holding my breath if only because Cyborg's inclusion in the Justice League film presents a real opportunity here for a diverse depiction of the Justice League, one that allows a young, black superhero to have share the spotlight with older, white male superheroes. Thus far, the DCEU has been relatively white: Amanda Waller, Deadshot, and Katana pop up in Suicide Squad while the previous Superman films has Perry White.

And while it may be grasping at straws to say, "Look! Cyborg equals total diversity," it is a major bonus to include him considering he has not meaningfully appeared in a previous DCEU film. Thus, the continued trend of leaving Cyborg at the periphery leaves me feeling nervous. Will he be a hero or a scene-filler?

The DCEU is onto something big when it comes to diversity. They've made an effort to include actors of color in their films in recent years and I really hope that, for this reason, there is more Cyborg in Justice League than there is on the cutting room floor.