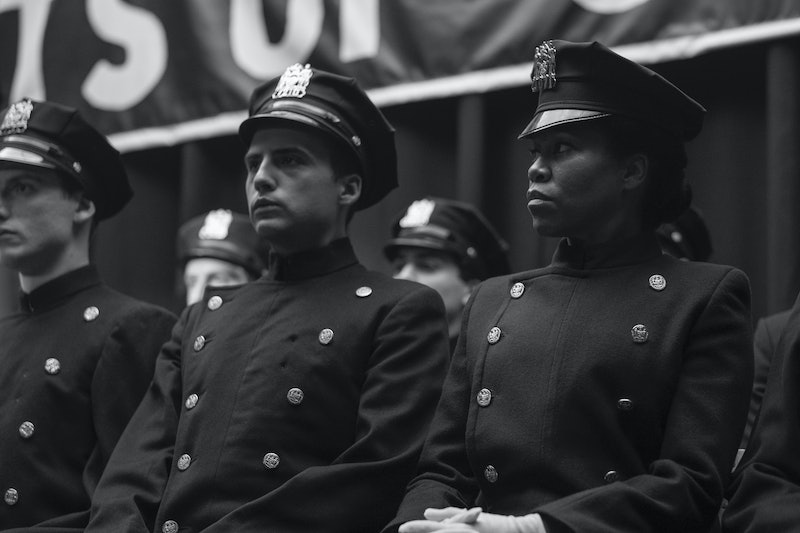 Spoilers for Watchmen Episode 6. This week Angela Abar dives into her grandfather memories and discovers that Will is Hooded Justice, the original Minuteman depicted in the American Hero Story show. Legacy and historical recurrence are major themes of Watchmen, and "This Extraordinary Being" merging the experiences of Will and Angela sets up an intriguing plot thread: is Angela the next Minutemen leader in Watchmen?

The Watchmen comic is all about the newer generation interrogating or following the actions of the older one: Laurie Blake never wanted to be the second Silk Spectre, but her mom Sally Jupiter pushed her to follow in her footsteps from a young age. Laurie was part of a second generation of Minutemen who never bought into (or lived up to) the idealism of the first, influenced by the jaded words of The Comedian, a first generation Minutemen and also Laurie’s father. The Comedian dies at the start of the comic, leading Doctor Manhattan and Night Owl II to muse on his brutal, complicated legacy.

Meanwhile, millionaire Adrian Veidt profits from the sales of Nostalgia, a perfume meant to elicit the feeling that things were much better a generation ago.

To a degree, the HBO series follows in the same vein. It opens with a funeral similar to The Comedian's: as Angela stands over Chief Judd's grave, her own father figure, she has to reckon with his legacy as a closeted Ku Klux Klan member. Laurie, meanwhile, has become jaded like her father, and even took on his hero identity to be The Comedienne for a bit — but like her mother, in her old age she pines for a man who’s no longer around to return her affection. Rorschach, who wrote down his often conservative musings in a journal before dying, lives again through a white supremacist group that idolizes him. And Adrian Veidt rages on Europa, one of Jupiter's moons, as the world he attempted to "save" by unleashing an engineered squid continues to divide itself. As Doctor Manhattan says at the end of the Watchmen comic, nothing ever really ends.

It feels inevitable that Angela will become what Will was before her — and in several ways, she already has.

The key difference with the show though is that Angela is the new protagonist, and revealing Will was Hooded Justice complicates the entire narrative. The comic is about how a 1980s audience cynically or nostalgically views the 1950s, but it's a story told through the lens of an all-white cast of characters. In Episode 6 of Watchmen, the reveal that Hooded Justice was Black adds a whole new facet to the story: having nostalgia for the past means erasing horrific injustice, and technically the Minutemen was an organization founded on combating that. But because Will had to hide who he was, the idea that the Minutemen were supposed to fight against prejudice got buried — that is, until Angela, his granddaughter, learns of it.

After downing an entire bottle of Will's Nostalgia pills, Will’s pain and anger is as much Angela’s as it is his own. There is no clear divide between where Will ends and where Angela begins in the episode, creating a whole new level of intergenerational transmission. Will Reeves sees himself as Bass Reeves, the historic, famed Black Marshall of Oklahoma, and now Angela sees herself as Will Reeves, one of the first few Black cops in New York and the first hooded hero. This isn't like Laurie inevitably becoming her parents with all their flaws; this is literally Angela embodying her grandfather, the technical creator of the Minutemen.

You see this idea that Angela is internalizing being Will throughout. “You ain’t going to get justice with a badge, Will Reeves. You’re going to get it with that hood,” Angela's grandmother says, and when she holds the mirror up to Will, it’s Angela looking back. When Nelson Gardner visits Will for the first time, he introduces the idea of “the new Minutemen … the team is not complete without the hero who inspired them.” It’s not Will but Angela who responds, “What does that have to do with me?”

It feels inevitable that Angela will become what Will was before her — and in several ways, she already has. Like her grandfather, she’s a cop who’s forced to don a hood and a mask as a result of the actions of a racist organization that has its hooks in the police force and the political system. Will paints white makeup over his eyes, in a mirror image of Angela painting black makeup over her eyes. Both of their stories embody the famous phrase "who watches the watchmen" as they fight back against people using their position of power to hurt others. Both of them are like Superman in the comic the immigrant man in the episode is reading: they're orphans without a home to go back to, so they fill their life by serving the greater good.

"The uniform a man wears changes you. Make sure yours changes you for the better," the chief tells the class when Will first graduates from the academy, and Angela stands in his place. So what does this all mean? Peteypedia tells us that one of the side effects of taking someone else's Nostalgia is permanent identity loss and altered consciousness. Angela might as well be Will now, and with all the knowledge about Cyclops and the aborted attempts of the Minutemen helping him, she may just be driven to restart her own team. Laurie Blake, Looking Glass, and Lady Trieu (the new Adrian Veidt) as official members, anyone? Lube Man?

If Laurie's generation was cynical that vigilantes could ever do any good, Angela's generation brings it full circle back to Will's: they can, as long as they have the right goal in mind. If Angela carries out what Will started, hopefully Senator Keene and the 7th Kavalry won't stand a chance.

This article was originally published on November 25, 2019