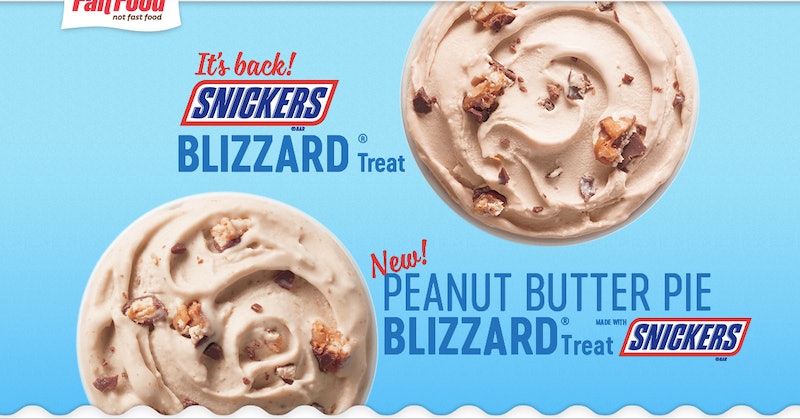 Ask and you shall receive. Just as one Twitter user was mourning the loss of Dairy Queen Snickers Blizzards, the big DQ decided to make their dreams come true — for the Dairy Queen August 2019 Blizzard of the Month, not only have they brought the Snickers Blizzard back, they also have a new Snickers Peanut Butter Pie Blizzard Treat which is... well, it's a lot of amazing stuff in one place.

You are probably familiar with the glory that is the original Snickers Blizzard — I tell you, no candy is more ready and prepared to be blended with ice cream than a Snickers bar. So much texture, so much flavor — so much everything. But the Snickers Peanut Butter Pie Blizzard Treat is not just a mouthful (in every sense), it also sounds heavenly.

"Snickers pieces, peanut butter, and graham blended with our world-famous vanilla soft serve to Blizzard perfection," the site explains. I don't know what makes this a "Blizzard Treat" rather than just a Blizzard, but I don't care. They had me totally convinced when I found out Snickers and peanut butter were both involved. Of course, if for some reason you're not a peanut butter fan, then you can get the classic Snickers Blizzard instead. The choice is totally yours.

Ask and you shall receive — sometimes it's just that easy. One Twitter wanted the return of the Snickers Blizzard and the gods of Dairy Queen made it so. If only the rest of life was that simple. And Dairy Queen, if you want to step in and handle my student loan debts that is OK by me.

At the height of summer, Dairy Queen is really at its peak — but the truth is, they've been delivering some amazingly outrageous flavor options for the whole damn year. First of all, let's talk a moment to appreciate the Dairy Queen S'mores Blizzard, which is a delight both for its amazing s'mores flavor and for being very on-trend right now.

If you're a fan of their dipped cones, it's important to know that a Dreamsicle Dipped Cone has been spotted in the wild at actual DQs and is now a part of their regular lineup on their website — I may love chocolate, but I have to say this look 150 times better than a traditional dip, scientifically speaking.

And for those who can just never pick a favorite, this year saw the launch of Mini Blizzard Treat Flights, allowing you to try three different flavors of Blizzard all in one go — perfect for when you're feeling indecisive or when you just know that you want it all. It was a huge hit this year, so hopefully we'll see it coming up again next summer. What's clear is that Dairy Queen is not afraid to innovate. Also, I'm very aware that they also do savory foods... but I just can't bring myself to think about that now with all of this ice cream-based glory at my fingertips and in my actual mouth.

What gets you more excited — the thought of the return of the classic Snickers Blizzard or the new Snickers Peanut Butter Pie Blizzard Treat? OK— you don't have to pick, because they're both very exciting indeed. The choice is yours — and there is no wrong choice. Go forth and Blizzard.