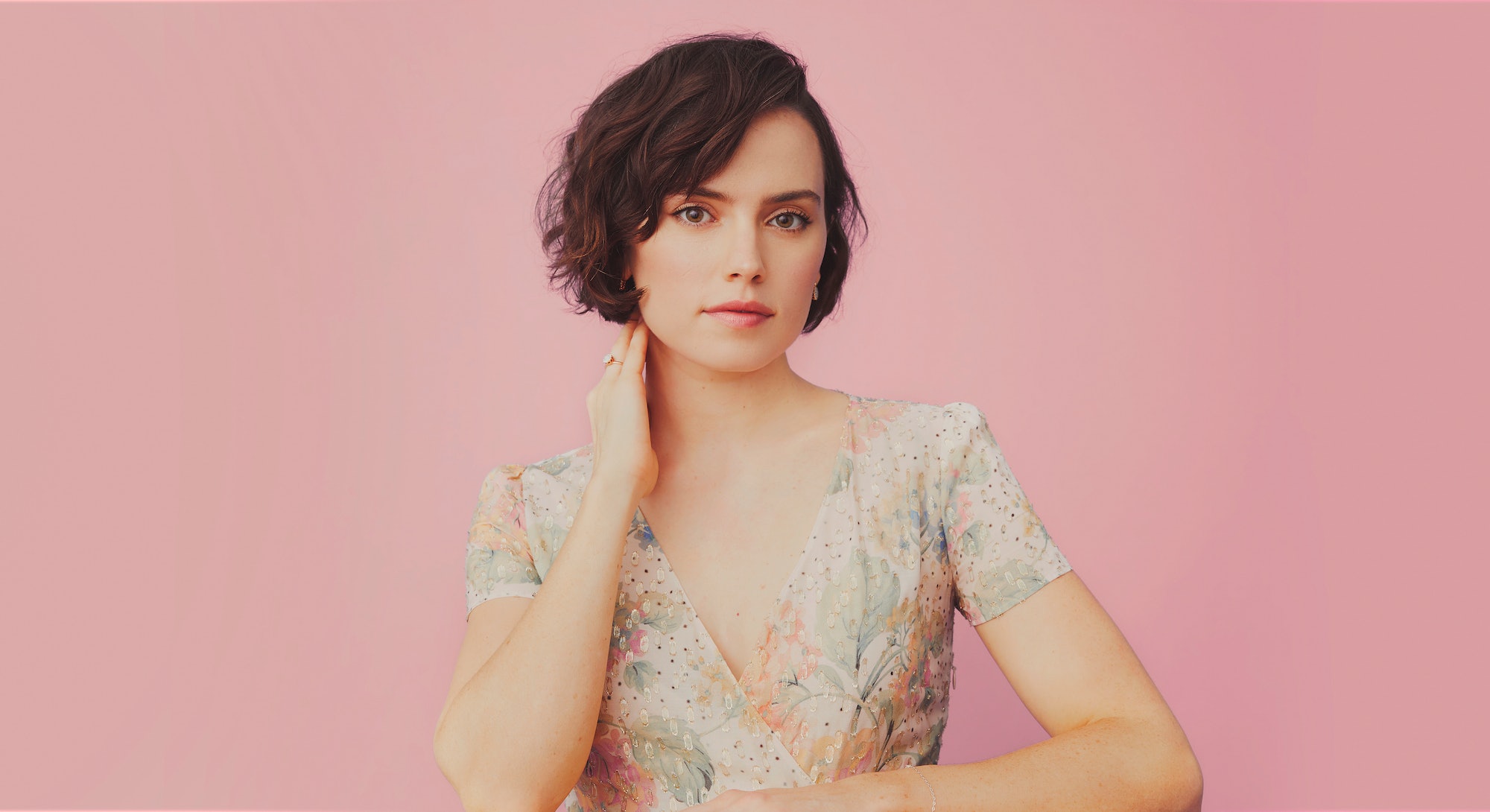 Daisy Ridley doesn't particularly love having her picture taken. It may seem counterintuitive for someone who makes their living in front of a camera, but the truth is that the 27-year-old, who became a household name when she was cast as Rey in the current Star Wars trilogy just five years ago, visibly relaxes when the shoot part of the morning is over and we can just talk. It's indicative of her relationship to "celebrity"; where others might use grander language to talk about the film industry, for Ridley, a set is her "workplace" and acting is her "job." It's a job she's dedicated to, but she won't let her status as an action figure, sci-fi icon, and Halloween costume dictate how much of her life she's willing to share with the world.

"There is this massive expectation on actors to have a very loud voice," she explains, curled up on a couch in the Bustle green room. As for how loud she wants to be? That's something Ridley is "still figuring it out."

For now, it seems that she's eager to let the work speak for itself. In her first leading post-Rey role (she also appeared in 2017's Murder on the Orient Express and voiced a Beatrix Potter character in 2018's Peter Rabbit), Ridley reinvents one of Shakespeare's most tragic figures. Ophelia, now out in theaters and on digital and on demand, based on the novel by Lisa Klein, tells the story of Hamlet from the perspective of the Prince of Denmark's doomed paramour — though in this version she's not so doomed and not so passive, either.

"Don’t go, Shakespeare purists!" she jokingly warns. Ophelia suggests that history's most acclaimed playwright wasn't really aware what she was up to, especially when she wasn't on stage. While no one knows better than the lead of a beloved rebooted franchise how tightly some cling to the skin of the original, Ridley doesn't take the potential criticism of its literary liberties seriously.

"[Hamlet] is not a real thing," she says, pointing out the obvious fact that purists still seem to miss. (Collider derisively calls it "Hamlet fan fiction" in their review.) "This is made up," Ridley continues. "So you do whatever you like with it."

"I think there’s a way of having a discussion that isn’t so vicious."

The same can and should be said of Star Wars, yet that backlash has been noisy, disruptive, and even threatening. Rey was classified by some angry fanboys as a "Mary Sue," an unrealistically perfect character; The Last Jedi was vilified by many for its progressive storytelling and the way it invalidated — or was totally uninterested in — various fan theories; and Kelly Marie Tran, who plays Resistance mechanic Rose Tico, was bullied off of social media by racist and sexist rhetoric and threats.

Fan entitlement is nothing new. The Simpsons' Comic Book Guy, who first appeared on the show in 1991, is handy pop culture shorthand for the fan who believes that his in-depth knowledge of a piece of media means that that media must cater to him or be deemed worthless. But while those conversations were once contained within fandom spaces like conventions and comic book stores, the evolution of the internet has led to efforts such as targeted campaigns to lower IMDB ratings and the infamous petitions to HBO to re-produce the final season of Game of Thrones and to Disney to remake The Last Jedi. It does seem like fan entitlement is getting worse... or at least more visible.

"It’s great that people are expressive of their views. But this is people’s jobs. People worked really, really hard on that thing," Ridley says, with conviction. "I think there’s a way of having a discussion that isn’t so vicious."

Social media can contribute to "the God complex that some people have," Ridley continues. "Because if you’ve got however many followers, and you write something that you think is, like, so deep, and a hundred people like it, it’s constant reinforcement." But, in her experience, it's not just people sitting behind their laptops and their phones who brazenly share hurtful opinions.

"I was at my friend’s birthday," she recalls, "and one of her friends, who I barely know, was like, 'Hey, really liked the first Star Wars. Didn’t really like the second one,' and I thought, 'That’s rude, dude! That’s my job!'"

Ridley herself quit Instagram in 2016 soon after she shared an anti-gun violence post that resulted in online harassment. There's no question that social media is a more crowded minefield for high-profile people who aren't straight, white, cis men, but the actor doesn't think she'd be any more active in that sphere if she weren't a public figure. A quick scroll through Pinterest is one thing, she says, but otherwise, social media "is not really for me, no."

On the other side of the coin, the actor is socially aware and engaged. Eschewing social media eliminates the most popular, democratic platform for speaking out on issues, but that's not a major concern for her right now. (The actor, who has endometriosis, does speak passionately about women's health and being educated on one's options, however: "F*cking go for a smear test!" she begs you, right as our interview wraps.) She contrasts herself with UN Women Goodwill Ambassador Emma Watson, who participates in what Ridley calls "pure, proper activism." The Ophelia star, instead, prefers to support causes in quiet ways; she tells me she's donated her salary for certain projects to small organizations that she supports. "I believe the things I believe and I share [them] with the people around me," she summarizes.

So while you may not be privy to much more unless you're in her inner circle, Ridley has shared her struggles with intense self-criticism and feeling anxious on set with her fans. Speaking to Stylist in 2017, she said that she "cried for hours" about her performance after she first saw herself in The Force Awakens. Fortunately — and in no small part due to her Star Wars family — she's been able to shake some of those feelings.

"There are always moments where the neuroses properly kick in, and that is also a blessing of working [with] people you love, and that you really trust," she says. "I think it’s just a matter of feeling safe ... And really, I would hope that for most people." She recognizes the opportunities afforded by a huge, big-budget shoot, where "there’s not that pressure of, 'we have to get that shot today.'" But in addition to this job being one in which she can take some time to get into the right headspace to give her best performance, Ridley says she's also felt surrounded by "people who I know care about what I’m saying" and that "when I had questions about things, or comments, it’s properly taken onboard."

It's not something that she takes for granted, either. "I feel just so f*cking lucky across the board," Ridley says. In fact, she drops the "L" word several times throughout our conversation. She says she's lucky for having the opportunity to work with a woman director — Ophelia's Claire McCarthy — so early in her career, but she's also fortunate to have "worked with guys [who've created] amazing female characters."

She's also eager to dispel any assumptions that with Ophelia, the upcoming film adaptation of the post-apocalyptic novel Chaos Walking, or any other role she takes on, that's she's attempting to distance herself from all things Force-related. "Especially in this film," she says, referring to the upcoming Rise of Skywalker, "I had an amazing time. I feel like I did my best work."

There are artists she looks up to — Saoirse Ronan, Reese Witherspoon, and Booksmart director Olivia Wilde among them. ("I want to work with her, not because she’s a woman, because she’s a f*cking great filmmaker," Ridley says of Wilde.) As of right now, however, she doesn't name any big aspirations beyond working with great people on cool things. "I’m pretty happy with my little journey," she proclaims.

I feel just so f*cking lucky across the board."

There's a project that she's optioned, Ridley tells me, but don't expect her to launch a production company or otherwise step behind the camera anytime soon. "For the most part... I’m an actress," she explains. "I like to do my acting, I like people to tell me what to do. I like to have an idea, but for the most part, I like to have an idea about something that’s been presented to me. I’m in that place."

The perspective and levelheadedness Ridley obviously possesses may be why the giant pop culture beast that is Star Wars hasn't swallowed up her life in any meaningful way. There's an element of the maturity that seems required of her that makes her feel a little "icky," however.

"I have had to deal with somebody this year who is… I guess, narcissistic," she says, keeping the details of the mystery person on this mystery project vague. "And it’s weird that I have to change my behavior in order to placate them. I pride myself on being honest, but I have to sort of treat the person like a baby. And this is a grown human being." She doesn't indicate the gender of the narcissist in question, but what she describes is a tactic most women would probably cop to employing, especially in the professional sphere. "A lot of the time, you do the thing that’s easier," Ridley continues. She relates that experience to the actions of her Ophelia, who, in this film, plays "crazy," with little care for how she's perceived, in order to escape dangerous circumstances.

Sometimes, the end goal is more important than how you're perceived in the moment. Sometimes, it's better for you not to waste your time confronting an irrational person with the truth. Sometimes — or most of the time, if you're Daisy Ridley — you have to leave work at work and keep something for yourself.