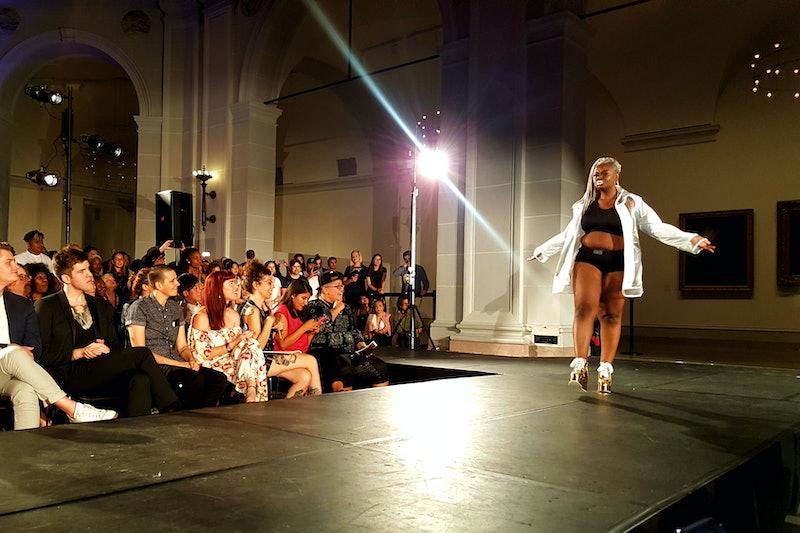 In a breathtaking hall at the Brooklyn Museum on Sept. 14, something proudly and profoundly queer happened. It was New York Fashion Week, and the normally quiet museum pounded with pop music as people of all genders, sexualities, races, and experiences modeled clothing from ten queer designers. LGBTQ style and empowerment website DapperQ hosted the runway showcase called R/Evolution, the largest queer fashion show during the week's fashion festivities.

The event was a chance for LGBTQ people to reclaim style from the mainstream fashion industry, which has recently started appropriating queer style through "androgynous" trends. The show also encouraged the queer community to reclaim fashion for themselves, as navigating style and gender presentation is often riddled with painful memories for many LGBTQ people.

Though mainstream fashion is a space known for including (white) gay men, the styles produced by these queer men are rarely designed with LGBTQ people as the target consumer. On top of that, runway fashion, especially women’s fashion, is often filtered through a male gaze no matter who is creating it. From bustles and corsets of the 19th century to low necklines and form-fitting frocks of today, trends are often partially shaped by their ability to appeal to men.

But when you remove that filter, as these designers did, and push radical expression to its limits, you get queer fashion in it’s purest form. You get R/Evolution.

Museums like the venue for R/Evolution are usually reserved for “inside voices” and artwork to which you can’t quite relate — and the latter was still true at the fashion week event. On the walls of the massive hall were portraits of white men from early history, dressed in military regalia and standing in triumphant poses. Their painted eyes overlooked a crowd of LGBTQ people, many of whom are black and brown, dressed in their very queer best.

But the portraits’ steadfast gazes were unmet and, for once, straight white men went ignored. That night, the men weren’t at the center of attention in the grand hall. Instead, all focus was on a T-shaped runway filled with the latest in inclusive style and experimental queer fashion.

In its fourth year, DapperQ’s annual fashion show is an oasis for the underrepresented. It's radically different from the shows that happen across the bridge in Manhattan for New York Fashion Week. Here, models with disabilities, fat models, and trans models all have a place on the runway. Here, entire shows are comprised of queer people of color, from the models to the creators. Here, fashion is valued as an essential armor against an unwelcoming world, not a status symbol or elite luxury.

“We wear our ‘chose clothes,’” MC Gabby Rivera, Marvel writer and author of Juliet Takes A Breath, said to open the show. “You know those clothes. The clothes that you pick out of your closet because they make you feel good. Because you are the only person you have to impress.

DapperQ’s R/Evolution was, by all accounts, a queer fashion show — proudly and unapologetically. But it also had similarities to main stage NYFW showcases, including tight seams, cutting-edge fashion, and experimental looks. The vital difference is that all R/Evolution looks were designed by queer people, for queer people.

Diversity on the runway isn’t a gimmick at DapperQ’s show, nor is it for the ten brands showcased. Unlike brands that have used only a handful of black models on the runway or designers that feature gender ambiguous clothing to follow a "trend," DapperQ is built off of the idea that inclusivity is a necessity. Many of the brands are owned by queer people of color, and the majority of models to walk in the show were people of color.

At R/Evolution, the loudest claps and cheers belonged to those challenging the most norms, like a queer plus-size woman wearing just underwear and fishnets, and a trans male model wearing bright red lipstick.

Gender subversive clothing and presentation, however, isn’t unique to DapperQ’s show, especially in today’s fashion world. Mainstream brands and designers have been pushing “gender neutral” and “androgynous” clothing as the latest trend for the past few seasons. But this so-called “next big thing” has long been the norm in the LGBTQ community, where butch presentation and gender-bending (and gender-breaking) fashion has been around for decades.

At R/Evolution, one of the show’s organizers sported a T-shirt proclaiming, “Hurry androgynous queers, get your clothes b4 fashion moves on.” The humorous shirt reflects the queer community’s frustration with becoming another disposable and appropriated trend by the mainstream. Because often, the ability to wear clothes that honor our identities has been a challenging battle.

“Fashion hasn’t always been a source of positive energy for me. It has been riddled with shame and awkwardness with my body and presentation,” Rivera said at the show. “When I think of fashion, I think of fighting with my mom in the dressing rooms at JCPenney because she wanted me in a church dress and I just wanted to be naked or in overalls.”

Queer closets are both a site of struggle and joy, pain, and affirmation. In a world where a black trans woman can be murdered for daring to wear a dress and a butch woman can be verbally accosted strutting confidently in a suit, fashion is revolution. Putting on clothes that honor you and your queer identity is an act of resistance and bravery. And, sometimes, style can result in violence.

But in that noisy Brooklyn Hall at the end of New York Fashion Week, LGBTQ people came together, if only for a couple of hours, to celebrate what queer fashion can be in its purest form. Forget the rules, the binaries, the pressures, and the pain. At R/Evolution, queer designers and fashion lovers were allowed to simply be.

Call it restorative. Call it powerful. Call it transformative. Or maybe just call it fashion.