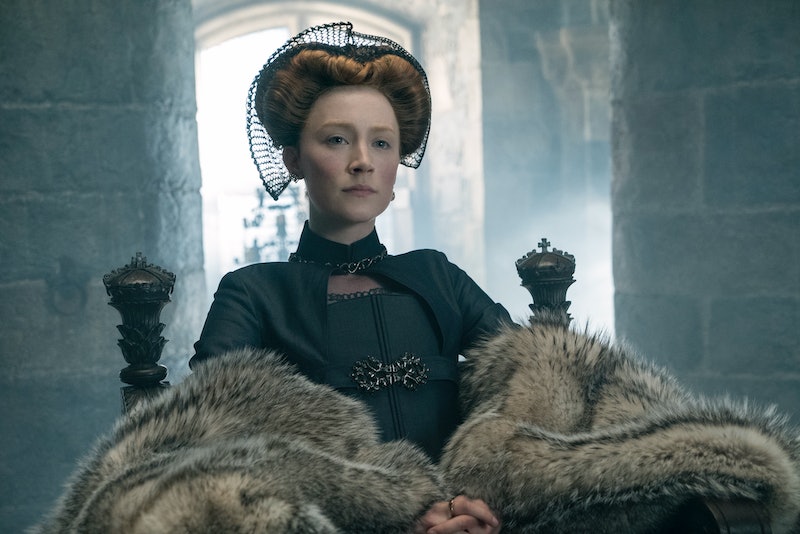 That Mary Queen of Scots and Queen Elizabeth I of England were in power at the same time is somewhat remarkable. But despite technically being in charge, both Mary and Elizabeth were surrounded by men that schemed behind their backs, charmed their way into prominent positions, and used their influence to control the political landscape. The new movie Mary Queen of Scots, opening widely on Dec. 21, shows just how far the men of the era — nay, any era — are willing to go to keep women out of power. And by addressing one long-debated facet of Mary's life, the movie makes a choice to blame her downfall on male insecurity. Spoilers.

Directed by Josie Rourke, Mary Queen of Scots stars Saoirse Ronan as the young Scottish queen who returns to her homeland after a life in France. Having been the Queen of France for a short time, her reign on the continent ended when her young husband Francis II died. But Mary's return to Scotland isn't a totally welcome one. As a Catholic queen, the Protestants of the nation were wary of her return. And Elizabeth's (Margot Robbie) influence on the land is made evident by powerful Protestant leaders, such as John Knox (David Tennant), a minister who condemns Mary's Catholicism as much as he does her gender. "Are we to abide a papist and a woman both?" Knox says to an attentive crowd.

But there are some events from Mary's history that remain a mystery. Yet where history offers multiple possible causes for a certain event, the film makes a definitive choice that says more about what dastardly deeds men might do to keep women out of power. Historians such as Mickey Mayhew, author of The Little Book of Mary Queen of Scots, and other experts have no solid answer on how the death of Mary's second husband, Henry Lord Darnley, came about. As the film details, an explosion occurred at the Kirk O'Field home where he was staying and Darnley and a man servant were found dead in a garden.

Here is where historians divide themselves, mostly, into one of two groups. Some believe that Mary was involved, that she conspired with James Hepburn, Earl of Bothwell to have her husband murdered before she took Bothwell as her third husband. Darnley did treat her rather poorly, after all and was viewed as an alcoholic embarrassment. But others say that Mary had no involvement, and that Bothwell actually kidnapped and raped her before forcing her into marriage.

The movie keeps the perpetrators of the explosion and murder of Darnley (Jack Lowden) in shadow, and Mary is shocked and saddened (or perhaps more scared) to hear of her husband's death, leaving her out of the mix of suspects. But the film does make a more decisive choice when it comes to Bothwell. In the movie, Bothwell (Martin Compston) is shown to be a devoted protector and confidant of Mary's for the majority of the story, that is until the male members of her council get to him. In a series of scenes involving secret meetings and men conspiring, Bothwell makes an abrupt change. He threatens Mary that he will not protect her against an uprising unless she agrees to marry him. He then rapes her, and blackmails her into a wedding.

After such a quick mourning period and marriage to Bothwell so soon after her second husband's death, the public, already suspicious of a Catholic queen, turns on her. With the help of John Knox, Mary is then viewed as a whore, a fornicator prone to lustful sins. This is pretty much what happens in the accepted history of Mary's downfall. But the movie goes deeper, and implicates Bothwell and her council members.

The men had promised Bothwell that by luring Mary into marriage, he'd become king. But it's revealed that the public's disapproval of her new husband was a part of their plan all along. By turning on her, they force her to abdicate in favor of her infant son, James, and regency returns to her brother, the Earl of Moray, who had been in charge in Scotland long before Mary's return. Bothwell seems shocked at his betrayal, but Mary sees it all. "You trusted these men?!" she exclaims to him, knowing that he had been a pawn just as much as she.

The choice to make Bothwell a rapist and an adversary in Mary's story is definitely an interesting one. Other adaptations of Mary's history have chosen the route that Bothwell and Mary were actually lovers. The CW series Reign went in that direction, giving Bothwell and Mary some serious sexual tension and providing for some steamy trysts and intrigue. Mary Queen of Scots, however, takes the blame off of Mary. Her sexual activity, her "harlotry," and corruption are the result of men conniving their way into her bed chamber and ruining her reputation, rather than turning her into a killer and a villain of her own story. It's the right choice if the film wants to maintain that Mary was smarter than to be victim to her own emotions. Going the Reign route would have seen her fall from glory because of her own mistakes, rather than the patriarchy.

As a result, the movie makes a statement about what women in power have to contend with. It's saying that even despite a supposed anointing by God, even queens can be the victims of misogynist plots, and that men will go to great lengths to keep them from ruling. Robbie's Elizabeth is firm in her decision that she never take a husband and never take a lover, for to do so would allow the possible corruption of jealous men to threaten her power. Being a prince, the film says, is never so great that it would "satisfy the ambition of a man."

History may never know what happened to Lord Darnley, or if Mary and Bothwell's relationship was one conceived in love. But Mary Queen of Scots' choice to show how far men will go to keep a woman out of power is something that reverberates to this day.