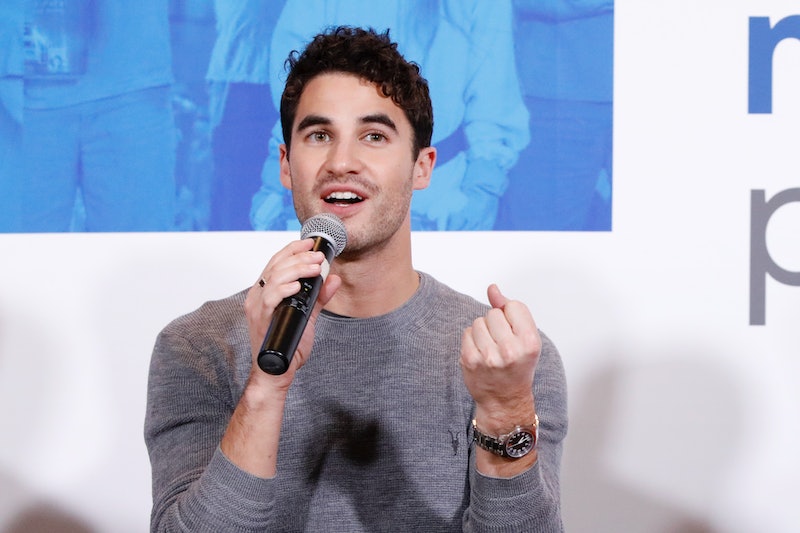 As a performer, Darren Criss is hard to define. He's played a musical Arrowverse villain, a Backstreet Boys tribute band member, and Harry Potter, just to name a few. The two characters he's best known for, though, are Glee's perfectly coiffed Blaine Anderson and The Assassination Of Gianni Versace: American Crime Story's murderous Andrew Cunanan. These individuals couldn't be more different from each other, except for the fact that they're both gay men — something Criss says he may no longer do.

"There are certain [queer] roles that I'll see that are just wonderful," Criss explains when we speak at a recent event for Clorox's What Comes Next in New York, a few days after he returned from an overseas tour with his Glee co-star Lea Michele. "But I want to make sure I won't be another straight boy taking a gay man’s role."

Although Criss says it's "been a real joy" playing queer characters like Blaine, Cunanan, and Hedwig in the Broadway musical Hedwig and the Angry Inch, he now doesn't feel comfortable taking those roles, which is "unfortunate," he says. "The reason I say that is because getting to play those characters is inherently a wonderful dramatic experience," he adds. "It has made for very, very compelling and interesting people."

It's understandable that Criss doesn't want to contribute in any way to the LGBTQ representation problem in Hollywood. This year's annual GLAAD “Where We Are on TV” report found that out of 857 series regular characters expected to appear on primetime scripted programming on the five broadcast networks — CBS, NBC, FOX, ABC, and The CW — in the 2018-2019 TV season, just 75 were LGBTQ. Even more depressingly, it was the highest percentage of LGBTQ characters ever recorded in the 14 years that GLAAD has released the report.

It's clear that there is still work to be done when it comes to LGBTQ representation on TV, which is why the frustration queer performers may feel when they lose those roles to straight actors is more than justified. In 2017, them. wrote about "gay-for-pay Oscar bait" like Call Me By Your Name, which stars Timothée Chalamet and Armie Hammer, two actors who are not openly gay, playing queer roles. By casting straight men in queer roles, them. claimed, films "straightwash" gay stories to seemingly make them more acceptable for heterosexual audiences.

“I think what’s clear is that there are a lot of great LGBTQ actors in Hollywood, and that there are plenty who are ready to play LGBTQ roles,” Sarah McBride, the national press secretary for the Human Rights Campaign, told them. in 2017. “We should give LGBTQ talent the opportunities and roles that reflect our lives and our identities.”

This conversation about straight actors being cast in gay roles is about more than just LGBTQ actors losing out on Oscars, of course. It's about Hollywood missing an opportunity to embrace new talent who would better serve these stories. And over the years, actors like Criss have become more sensitive to these types of concerns. The Versase star understands that there is an added honesty to actor getting to play characters who share their identities. "The commitment to that drama is told in such a way that it can really effectively reach people’s lives," Criss says. "I think that really is important."

Representation is something that's been on his mind more than ever since he took onThe Assassination of Gianni Versace. Cunanan was Filipino-American, which allowed Criss — whose mom is from the Philippines, while his dad is from Pittsburgh, PA — the chance to play a character that shared his own ethnicity for the first time in his career.

"There’s something very twisted about the fact that somebody that I share ethnicity with, a Caucasian-Filipino-American who is famous for doing something absolutely deplorable, is now the reason that I get to sit here and talk to you," he tells me. "That is sort of a bizarre twist of fate."

Especially since Criss has previously talked about how the lack of Asian-American roles — they represent only 1 percent of all leading roles in Hollywood, according to a 2016 study by the University of Southern California’s Annenberg School for Communication and Journalism — is not something that has always been on his mind.

"I have the luxury of being half-white and looking more Caucasian," he told Vulture back in March, "so it doesn’t weigh on my conscience as much, like, 'Ugh, why aren’t there more roles?'” That comment got some pushback from other Filipinos, who felt as if Criss was denouncing part of his heritage.

"I didn’t choose to be half-Filipino. I mean I love it, it’s very cool, and if this has been the outcome sure, I’m very pleased and proud that I can represent people that may see my presence in the media as a beacon for themselves," he says now. "That’s a real privilege."

Another privilege is being able to pick roles that keep people guessing, even if puts a little more pressure on Criss to find that next great one. "It’s just made me really scared because [The Assassination of Gianni Versace] ticked so many massive boxes," he says. "I’m kind of like, 'Well, sh*t, how can I possibly move from there?'”

He isn't interested in playing the same character twice, something Glee fans might not want to hear. When asked about whether he'd ever return to the show, Criss says "never say never," but it definitely won't happen anytime soon. "It’s not because I don’t love Glee or didn’t love my time on Glee, it’s just Glee was a new thing," he explains. "The thing that made it special was its freshness. That’s hard to recreate."

To keep it fresh, Criss, who says he doesn't know where Blaine would be now ("I’m not enough of a Glee scholar to know," he admits, adding "Lea Michele would probably have an opinion, she’s a bonafide Gleek."), thinks if Glee does come back, it needs to enlist a new set of actors. "I like what it celebrated," he says, "new faces and new voices and I’d want to see that incarnated but with somebody new."

Criss, it's evident, is more than happy to make room for new voices who have new stories to tell.