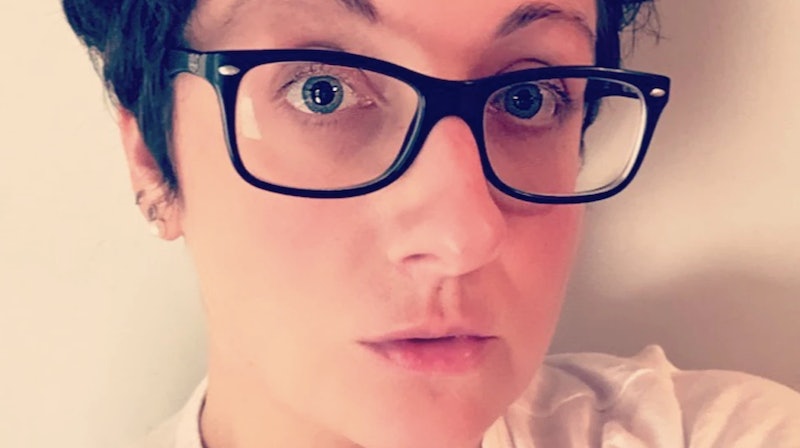 Alcohol and I have a complicated relationship. But, like all complicated relationships, it hasn’t always been this way. When I wrote about my struggles with alcohol in 2017, it was a turning point for me. I was putting it all out there, admitting to something I had long ignored, and I could see clearly what alcohol had done to me.

It was alcohol that stood in the way of my being as far in my career as I wanted to be. It was alcohol on which some of my relationships relied, and it was alcohol that resulted in the demise of others. Alcohol had never done me any favors. Instead, it was a crutch I leaned on in good and bad times; a crutch that always broke before the end of the night. There's only so many times you can wake up in the morning remembering only bits and pieces of the evening before, terrified you've done or said something awful, and be able to feel safe within yourself.

To add to my own issues with alcohol, I have always dated men who drank. Growing up, reading male authors like Hemingway and Fitzgerald, I had it in my mind that that was the kind of man I wanted: a man who was brilliantly creative, definitely tortured, and, of course, that meant they misused alcohol. My first boyfriend, Tom*, fit the bill. It was college; drinking to excess every weekend was more than accepted. But it wasn’t until years later, after we broke up and had moved to New York City separately to pursue our dreams, that I realized Tom's drinking wasn’t just typical college behavior.

By the time we met up again in our mid-20s, his drinking had become an every day, all day thing. But I dismissed it. He was a man I had loved, would always love, and he was that creative, tortured soul that I’d never stop looking for in other men. His drinking was who he was, and I could justify it a 100 different ways, starting with the words, “artistic genius.” It was also his drinking, something that far exceeded my own, that had me believing I didn’t have a drinking problem. I didn’t drink every day. I didn’t start drinking at 10 a.m. I could go weeks without drinking anything at all.

But the habit of loving men who drank and drank a lot had been set in motion. So much so that even the mere thought of dating a man who didn’t drink wasn’t something I could see for myself. If he couldn’t drink the way I did, the way the men in my past drank, I thought I wouldn’t take him seriously. The problem with habits is they’re near-impossible to break. My bad habit of drinking, as I know now, wasn't much different from my bad habit of dating men who drink a lot. It’s because of these two bad habits that I never considered getting sober. It was never on the table; it was, simply, inconceivable.

But after my marriage came to an end in 2015, I felt a shift. I spent several weeks drinking, trying to cope with the humiliation of having been cheated on, and when I finally came to my senses, I realized I was ready to see things differently and stop drinking the way I had been.

It helps me ... to see that it's possible to have fun without drinking

When I was finally able to start dating again in the summer of 2016, I met a man who didn’t drink a lot. He didn’t care to drink and when he did, it was just one, and most of the time, he didn’t even finish it. Because of this, I followed suit. I didn’t want to be the one getting drunk while he stayed mostly sober. So I didn’t drink. Even when things ended badly with him, I still didn’t drink the way I had in the past. Why? Because I didn’t want to be that angry drunken mess I had been at the end of my other relationships. I was angry enough with how things ended with this particular man, I didn’t need to add fuel to the fire.

As I recovered from that failed relationship, I realized I had broken two patterns. Not only did I meet and actually fall in love with a man who didn’t drink, but my drinking had decreased significantly. Even when I went out with friends in the months between then and now, I’ve been content to have a couple glasses of wine — if any — then switch to water or Diet Coke. I no longer woke up with feelings of regret, as I worried about what I had done the night before, and I started working on writing projects outside of my daily articles. I was flourishing. The desire to get drunk and be drunk, the one that was such a big part of my late-20s and most of my 30s, is gone. Me, Amanda Chatel, the woman who never learned from her mistakes had effectively done a 180. It was, and still is, baffling.

I’ve realized that in order to keep myself in check, it's helpful to date someone who doesn’t drink. It helps me to have more moderate models of drinking, helps me to see that it's possible to have fun without drinking, and having someone by my side who's also not drinking is the support I need to keep that impulse in check.

I know I’m not going to be 100% sober. I also won’t deny that I need a little help when it comes to using alcohol and, at this point in my life, that’s a sober guy. If I were to date a man who drinks the way the men in my past did, I’d be right there with him. I want to know that if I go to dinner with my partner and order a glass of wine, because I want a glass of wine, that will be my only glass of wine. With a partner who isn't drinking, that's a lot easier to accomplish.

More like this
How Ovulation Affects Your Sense Of Smell, Libido, & More
By JR Thorpe and Lexi Inks
I Spent 2 Years Trying TikTok’s Dating Advice
By Kailynn Johnson
Why Being “Too Sensitive” In Relationships Is A Good Thing
By Lexi Inks
Florence Pugh & Zach Braff Reflect On Their Relationship After Their Breakup
By Jake Viswanath
Get Even More From Bustle — Sign Up For The Newsletter
From hair trends to relationship advice, our daily newsletter has everything you need to sound like a person who’s on TikTok, even if you aren’t.