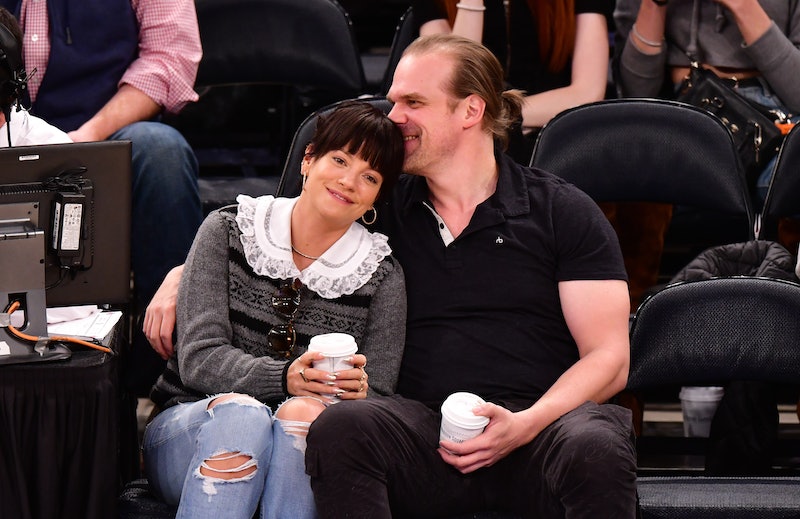 While David Harbour and Lily Allen's recent tour-de-PDA pretty much confirmed what everyone already assumed, now there's definitely no denying it: Harbour and Allen's relationship is Instagram official. The couple's big social media debut came in the form of a slightly grainy mirror photo taken in a Disney World parking lot. (Bustle previously reached out to Harbour and Allen's reps about dating reports, but did not hear back.)

On Monday, the Stranger Things star posted a picture of himself with Allen at Disney's Magic Kingdom. In the spirit of Halloween, the pair decided to wear costumes for the occasion. Even though Harbour's caption made it clear he and Allen went as a prince and a princess, the Stranger Things star was also giving off werewolf-dad-in-a-half-cape vibes. "The prince, princess and the parking lot," Harbor wrote. "That seven dwarves mine ride is the best one in the whole damn park. Go on, fight me," he joked, referring to the park's Snow White-themed rollercoaster.

Harbour and Allen were first spotted out together in London in early August, but their casual hang around her hometown seemed pretty platonic at the time. By October, however, dating speculation ramped up, especially after Harbour hosted Saturday Night Live on the 12th.

First, there was the fact that Allen accompanied Harbour and his dad to the SNL afterparty. Then, SNL writer Streeter Seidell revealed on Twitter that Allen had been involved in coming up with the concept for Harbour's "Grouch" digital short. The icing on the cake came via Allen's Instagram Story the day after the show, as she shared a screenshot of Harbour's buff muscles from the cycling class skit and wrote "mine" across one of his arms.

The pair was also photographed kissing on the street in New York following SNL that Sunday, which pretty much proved that they were a couple (although neither one of the stars has verbally addressed their relationship status yet). Since then, more PDA has followed (see: the Oct. 18 Knicks game in the photo above).

Prior to Allen, Harbour dated actor Alison Sudol from January 2018 to around July 2019. Allen, for her part, was most recently seeing MC Meridian Dan, but they reportedly broke up back in January after three years together. The singer shares two daughters with her ex-husband, Sam Cooper — they split in 2016, and their divorce was finalized last summer — but it's unclear whether she's introduced her kids to Harbour just yet.

More like this
Kate Bush Revealed The Real Meaning Behind 'Running Up That Hill' Lyrics
By Darshita Goyal
Twitter Is Freaking Out Over Rihanna’s 2023 Super Bowl Halftime Show Announcement
By Stephanie Topacio Long
Everything To Know About Taylor Swift’s 10th Studio Album, 'Midnights'
By Grace Wehniainen and Jake Viswanath
What Demi Lovato Really Thinks About Child Stardom, Depression, & Sobriety
By Radhika Menon
Get Even More From Bustle — Sign Up For The Newsletter