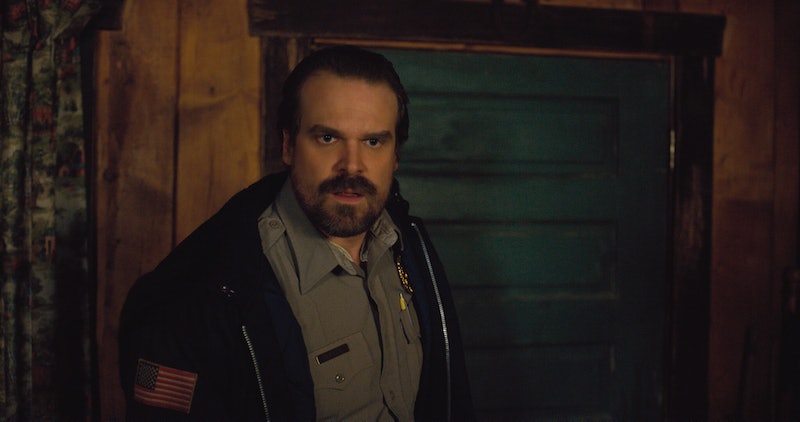 Say goodbye to that glorious mustache, because David Harbour has wrapped filming on Stranger Things Season 3, and he has the picture to prove it. On Saturday, Nov. 10, the actor announced the news to fans via a caption on Instagram telling them that he's about to say goodbye to the '80s 'stache he rocks as Jim Hopper. That's not all he said, though — according to the hashtags, the photo contains "spoilers without context," and they may hold a clue about what's next for Hawkins.

In the photo, Harbour keeps his head down, so that the two most prominent things in the picture are his mustache and the blue baseball cap he's wearing. The cap is advertising a local Hawkins business: Gary's Plumbing & Heating, Warming Hawkins, In. since 1972. The caption offers a few more clues. It reads,

"Wrapped. Everyone say 'goodbye mustache.' If you need any info on what's good in Hawkins while I'm away, give Gary a call. He can't keep his damn mouth shut. #spoilerswithoutcontext #awfullogos #facecaterpillar #bestjobever #fletch #speilbergeatyourheartout"

OK, there's a lot going on here, so let's try to break it down piece by piece. Thus far, there's only been one character on the show named Gary, and he was a coroner. Now, he could totally multitask and be a plumber, too, but it seems more likely that the reference to Gary and the hat are tied to that Fletch hashtag that Harbour throws in near the end.

During an August interview with Variety, Harbour shared that the Chevy Chase movie Fletch would influence Season 3. That news surprised quite a few people since the Chase film is a comedy about a reporter who takes on a series of ridiculous disguises in order to unearth newsworthy stories. Since it was previously announced that Jake Busey is joining the Season 3 cast as Bruce — "a journalist for The Hawkins Post, with questionable morals and a sick sense of humor" — then it seems he's the most likely candidate to channel his inner Fletch.

Now, Harbour references Gary as being someone who can't keep his mouth shut, and it seems that could mean one of two things. Either he's cheekily referring to himself and nodding to Fletch by taking on the alter ego of Gary, or that whole plumbing theory is about to come back around, and Gary and Bruce will change life in Hawkins forever. (There are actually many more theories, but let's run with that second one for now.)

At the end of Season 1, Will coughed up a slug creature from the Upside Down and washed it down the drain of his sink. Season 2 established that those slugs are one step in the evolution of Demogorgons with the introduction of Dart. Despite this, nothing ever came of the idea that Will may have contaminated the town's water supply — or did it?

It was never confirmed that Dart was the slug that Will coughed up, and given the intricate passage system connecting Hawkins to the Upside Down that the gang had to close last season, the baby Demogorgons didn't need to use the drains to infiltrate the town. Basically, that slug is quite possibly still unaccounted for, and he may have been found by Gary during a routine house call.

Given the mass amount of weirdness that goes down in Hawkins, this mysterious Gary the plumber may know more about the bizarre happenings in the town than anyone would expect. And with a reporter set to be snooping around for scoop that Hopper is trying to keep buried to protect Eleven and Will, a person with any information about the Upside Down (or potential proof of its existence) is a threat to Hawkins.

If Bruce can find proof of the massive cover up that's currently taking place in Hawkins, then he could take the news national — and create some serious national panic in the process. Basically, when you mix an ambitious and tricky character with a well-meaning plumber, anything could happen. (Alternately, the same could be said for a tricky and ambitious reporter posing as a plumber to gather information from the people of Hawkins.)

This is, of course, just a theory. Stranger Things is far from predictable, so Harbour's photo could mean almost anything. Or he could be teasing fans by hinting at spoilers that aren't there. Either way, the news that filming is wrapping up on Season 3 means that the long wait for answers is coming ever closer to an end.