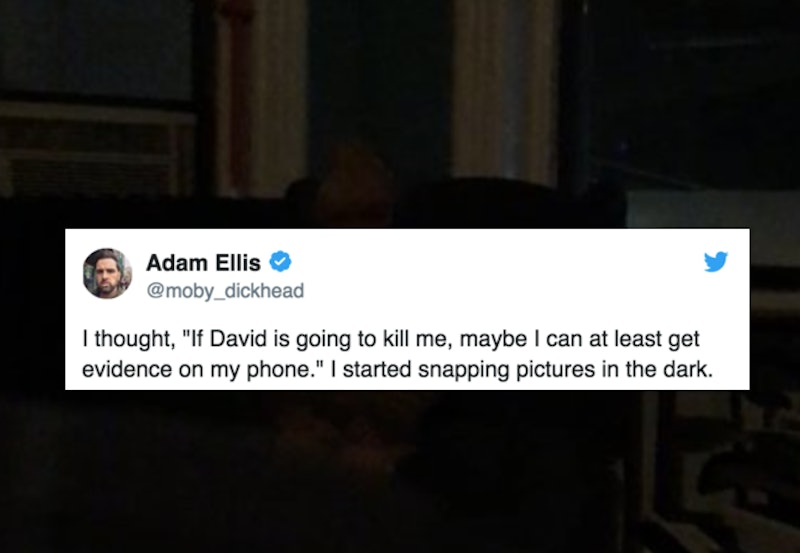 So, hey, remember Adam Ellis? The guy who’s been dealing with what looks like a haunted apartment situation for the past couple of months? Well, as of Nov. 6, we've got a new Dear David update, and it’s the most terrifying yet — whether you believe in ghosts or not. The bottom line is that, even if this whole thing is a hoax (and I’m not necessarily saying that it is; despite my natural skepticism, I’m still willing to entertain the possibility that it’s not), it’s an extremely spooky one that’s worth reading in a brightly-lit location full of friendly faces. (I do not, by the way, think it’s an accident that all of the Dear David updates have hit Twitter later at night. Way to go for maximum effect.)

Rather a lot has happened since the last time we checked in on Ellis; it’s been two months, after all, with almost the entirety of autumn passing between September and now. In the interim, Ellis reported via Twitter that he had more nightmares; he took a spooky photo of an office in that abandoned warehouse he had previously tweeted about (and the internet had a field day with it); he went on his planned trip to Japan; and he posted this lighthearted update while he was away:

As well as this decidedly less lighthearted update:

Does that look like Dear David to you? For reference, here's Ellis' original drawing:

And here's a closer look at the sculpture:

The resemblance is... uncanny.

In any event, though, he made it home safe and sound (and yes, the cats were fine when he arrived back at his apartment). However, about a week and a half after he returned, he wrote that he had begun having trouble with the electricity in his apartment; additionally, he snapped another freaky photo through the peephole of his door. Eventually he had a friend come over and cleanse the apartment, but at the time, he wasn’t sure it worked — because shortly thereafter, two things happened: One, he walked by the warehouse again and saw a hearse parked in it… and two, he spotted someone spying on him from outside his window that night:

Here’s what that last photo looks like brightened up a bit:

That image is full of enough NOPE all on its own… but then, in the latest update Ellis posted on Nov. 6, it all reached a whole new level of NOPE.

It’s now November, roughly three months after Ellis posted the very Dear David thread in August and four months after he had his first dream about him. On the evening of Nov. 5, wrote Ellis, he had another dream that was similar in some ways to that very first dream; some of the details were a little different (the chair on which David appeared, for example), but the setup was much the same:

As was the case the first time around, he felt physically paralyzed in the dream; however, he noted, “Something was different. I still felt mostly immobile, but I could squirm just a little bit.” He said he felt “more alert” and that he was able to move his hands a bit.

David started to move, which Ellis knew meant he was about to begin creeping towards him, just as he did in the first dream. But this time, Ellis didn't stay still.

He kept snapping photos as David approached, getting closer and closer…

…And that’s when Ellis woke up. At first, he didn’t think the dream was anything out of the ordinary; indeed, things like this are pretty much “routine” for him at this point, he noted. He said that originally, he wasn’t even going to post anything about this dream, “since it wouldn’t really be new information.”

But then he looked at the camera roll on his phone.

There were dozens of photos that were virtually pitch black, he wrote, three of which he proceeded to post. Here’s the first one:

They don’t look like much at first, but there’s a reason that Ellis suggested readers turn up the brightness on the photos in the tweet that immediately precedes them. I did just that, running each image through a photo editing program — and here’s what resulted for photo one:

I believe I speak for many, if not all of us when I say:

Ellis’ closing thoughts on this episode are as follows:

So: What exactly is going on here?

The updates over the past two months prior to this one can all be explained fairly easily: The hearse at the warehouse was likely just a coincidence; the photos taken in the warehouse office and through the apartment’s peephole were likely examples of pareidolia (which may or may not have been helped along by Photoshop); the electricity issues were likely a problem with the apartment building; and the statue he saw in Japan was likely just a coincidence.

Both this latest update and the photo Ellis took through the window, though? I feel confident in saying that those aren’t pareidolia; there are very clearly figures in each one. They look a little like Robert the Doll to me, to be honest — but although they’re definitely not Robert (he’s locked in a glass case in Key West), I wonder if that idea isn’t too far from the truth: Maybe they are dolls.

I’m not the only one who’s noticed the doll-like quality of the figures, either; in reference to the window photo, one Twitter user observed:

Food for thought, no?

At this point, whether or not you believe Ellis is being stalked by a ghost or whether he’s carrying out an extraordinary exercise in social media-based storytelling depends pretty much entirely on whether you believe in ghosts in the first place, or whether you’re a skeptic. We’ve moved beyond the point where coincidence or psychological phenomena can explain what we’re seeing; either there’s a legit ghost in the window and bedroom photos, or Ellis has deliberately staged the photos to look like there’s a ghost in them using easily acquired items and/or some image-manipulation software.

I’m a skeptic, so I believe the latter — but that doesn’t mean that I’m not enjoying the whole thing. Indeed, I’m enjoying it enormously; I think it’s a terrific example of exactly how creative you can get with your storytelling when you use an unconventional medium to do it. You might feel differently, though, which is also A-OK. We’re all along for the ride regardless, right?

Of course, if it turns out that there really is a ghost stalking Ellis and he comes to actual harm at some point, I will a) revise my opinion, and b) feel really bad for calling the whole thing a hoax. Let’s hope it doesn’t come to that.