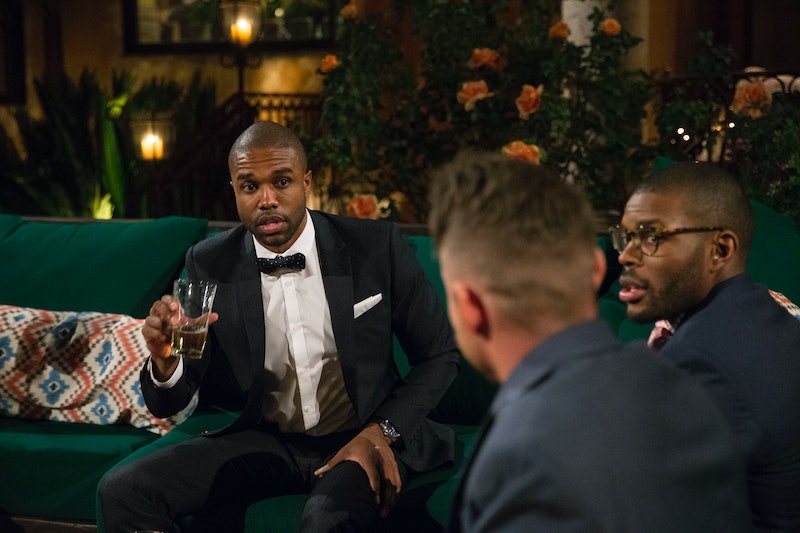 Only a day after releasing a statement saying that his character has been "assassinated," DeMario Jackson claims he was fired over the Bachelor In Paradise allegations, according to an interview with Inside Edition. Entertainment Tonight also confirmed the news of Jackson's firing from his job as an executive recruiter. (Bustle reached out to the company listed on Jackson's LinkedIn page for comment, but did not receive an immediate response.) In the video interview with Inside Edition, Jackson says, "My character has been assassinated. My family name has been drug through the mud."

Earlier: Filming of Bachelor In Paradise Season 4 was recently suspended following misconduct on set. At the time, Warner Bros. released the following statement to Bustle:

"We have become aware of allegations of misconduct on the set of 'Bachelor in Paradise' in Mexico. We have suspended production and we are conducting a thorough investigation of these allegations. Once the investigation is complete, we will take appropriate responsive action.”

The alleged misconduct involves a sexual encounter that reportedly may not have been consensual between Jackson and a female contestant, who was later revealed to be Corinne Olympios. According to various reports, Olympios was allegedly intoxicated and unable to consent.

When asked by Inside Edition if he blamed Olympios, Jackson said, "I don't blame anyone right now. The only thing I want is the tapes." TMZ previously reported that Jackson wanted the footage released to clear his name.

On Wednesday, the former Bachelor contestant shared her side of the story. Olympios released the following statement to Bustle via her rep:

Similar to what's stated in the video above, Jackson's statement released on Wednesday to E! News reads,

Since legal teams are now involved and details remain up in the air, it seems best to wait and see what happens before jumping to any conclusions.