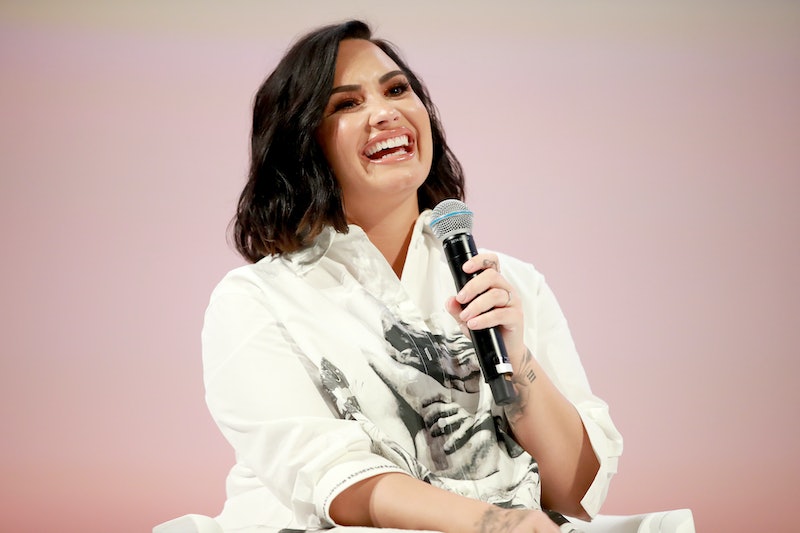 Demi Lovato is getting ready to return to the spotlight — and she's bringing a new man with her. On Wednesday, Nov. 13, Demi Lovato seemingly confirmed her relationship with Austin Wilson by posting a photo of the model kissing her on the cheek on her Instagram page. The singer captioned the black and white snap with "My [heart]," while Wilson — who shared a photo of himself cuddling Lovato in front of a mirror on his own social media page — called her "my love." (Bustle reached out to Lovato's reps for comment, but have not heard back.)

Though Lovato hasn't publicly commented on her relationship with Wilson, it appears that the pair are part of the same circle of friends. In October, both Lovato and Wilson shared social media posts mourning the death of their friend, Thomas Trussell III, who reportedly died as the result of an overdose. "A T for Tommy. RIP you special angel. Love you forever," Lovato wrote alongside a photo of the tattoo that she got in October to memorialize Trussell.

Wilson is no stranger to the spotlight, having booked campaigns for the skincare line Baxter and indie clothing lines. His father, George Wilson, is one of the original Dogtown Z-Boys, a legendary group of skateboarders from 1970s California who helped pioneer many of the aerial tricks that skateboarders use today. Nowadays, George is a menswear designer who has been profiled in Vogue magazine, and Wilson often shares loving posts praising his father on Instagram.

Before Wilson, Lovato was last linked to Bachelorette and Bachelor in Paradise contestant Mike Johnson.The pair went on a few dates in September after the singer shared her crush on the Air Force veteran on social media, but their romance fizzled out sometime in October.

Lovato herself has taken quite a bit of time away from the spotlight in the wake of her July 2018 hospitalization from a reported overdose, though her photos with Wilson seem to indicate that she is ready to return to the public eye. On Nov. 2, Lovato teased new music at the Teen Vogue summit in Los Angeles, though she also noted that she's going to release her next album at her own pace. “I've really decided to take my time with things," she said. "When the time is right, I will put it out there. I am dying to release new music... but everything in due time."

Based on her cuddly photo with Wilson, it seems like the time was right for Lovato to take the next step in her romance.