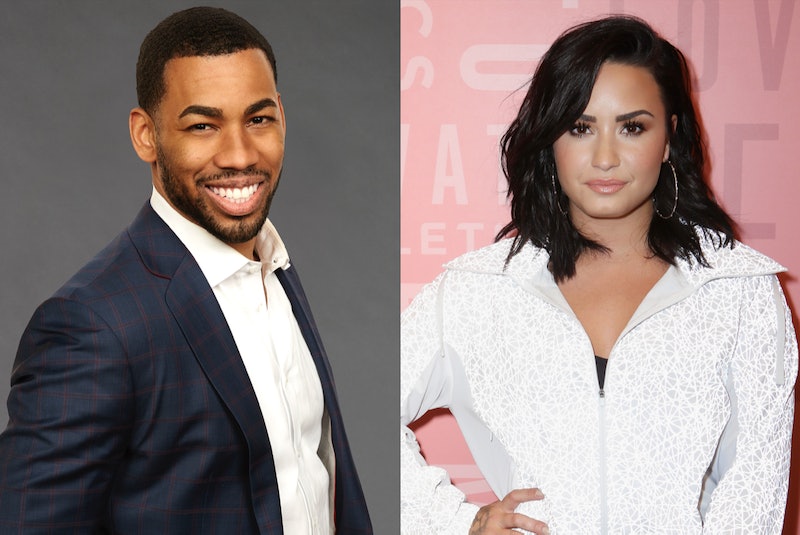 Things may not have worked out for him on The Bachelorette or Bachelor in Paradise, but it looks like Mike Johnson's luck might be changing. After Demi Lovato revealed she had a crush on Mike while The Bachelorette was still airing, they instantly became many fans' dream pairing, but what if this pairing is real? Clues that Lovato and Mike could be starting to date for real have been seriously piling up lately.

Between their recent social media activity and the reports that have surfaced in the weeks since Mike made his departure from BiP (and even before that), Lovato and Mike dating has truly seemed more and more like a real possibility. Of course, some fans have been rooting for Mike to be the next Bachelor, but if that doesn't end up happening for him, starting a new relationship with someone as awesome as Lovato is pretty good, too — and all because she spotted him on TV.

Here are all the clues that Mike and Lovato could be dating (or at least starting to). Neither of them have confirmed a relationship just yet, but if all this evidence really does add up to something, it would be the most shocking twist in Bachelor history.

Sources Are Saying It's On

According to what insiders close to the possible couple told People, Lovato and Mike are "talking". “[They're] having fun and getting to know each other," the source said. “They’ve been talking privately for a bit and hanging out.” Yep, that could definitely be something.

When Lovato shared a photo of herself in a bikini — along with a lengthy caption about being appreciative of her body and celebrating her cellulite — Mike left a flirty comment, and Lovato responded in kind with some pretty flirty emojis herself. It definitely seems like it could be more than an innocent exchange.

This is a small, subtle clue, but still a clue all the same. After that particular exchange, Mike also liked the next bikini photo she shared. Hmm...

They Reportedly Went On A Date

Earlier this month, Entertainment Tonight reported that Lovato and Mike went on a date and that it went well — and apparently, Hannah Brown was the one who helped them get in contact with each other. It's funny the way life works, right? A source also told E! News at the time that they're taking things slow, but so far, so good.

"They did go on a date and it's been going well," the E! source said. "They seem to have a lot in common and are just enjoying getting to know each other."

Mike's Always Been Down To Hang

During the Men Tell All taping in July, Mike told Us Weekly that he'd definitely go out with Demi, no hesitations about it. “I’m flirting with her too. Tell her, ‘What’s up, baby?’” he said. “I would definitely take her out for an initial date, yeah. 100% not scared about it at all. I would be like, ‘Oh my God! Girl, come here.’”

Is it possible that something was already starting to happen when he made that comment? Hmm...

Lovato and Mike ending up together at the end of his Bachelor Nation journey would be an ending not even Chris Harrison could orchestrate. But if there is something going on, hopefully, they'll clue fans in soon. They could be the perfect match.