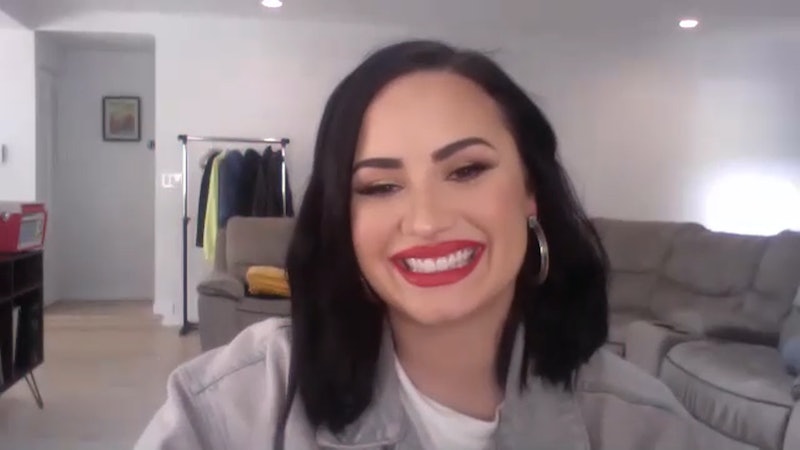 Demi Lovato is in a much better place now than ever before — and she's not going to keep anyone in her life who messes with that happiness. During a recent appearance on Jameela Jamil's I Weigh podcast, Demi Lovato said she cut "toxic" people and her exes out of her life after she explained that not setting boundaries helped contribute negatively to her mental and physical health. The singer told Jamil on the April 24 episode of the podcast that "learning to set boundaries with other people" has become an important part of her life over the past "year and a half."

“I had to learn that not setting boundaries put me in the position I was in," Lovato said, adding that not having firm boundaries with the press contributed to her relapse. "Talking about every detail of every part of my life, whether it be a relationship or whether it be my recovery, nothing was sacred to me anymore." In addition to deciding to keep more of her life to herself, Lovato explained that she also realized that she needed to "cut a lot of toxic people" out of her life recently.

"I kind of used to have this mentality that if I had negative experience with someone I always needed to mend it or I always needed to make things right," the singer said. Most importantly, Lovato made the decision to stop talking to many of her exes, as those relationships weren't helping her move forward. "I’m not really friends with any of my exes today because I had to realize that that wasn’t healthy either. Trying to maintain close friendships with some of my exes just isn’t realistic."

The singer first revealed that she was focusing on leaving past relationships behind in a recent interview with Harper's Bazaar, when she confessed that she no longer speaks to ex Wilmer Valderrama. "I'm really happy for him and I wish him nothing but the best, but we're not in each other's lives, haven't spoken in a long time," Lovato said, referring to his recent engagement to model Amanda Pacheco.

Though the pair dated for six years, Lovato said she feels the breakup was the best thing for her. "I think I needed that because I needed to learn to be okay on my own," she said. "When you get into a relationship with somebody at that young of an age and then you spend six years with somebody, you don’t really get to learn about yourself." (For the record, she also no longer speaks to ex Joe Jonas, or his brother, Nick, who used to be a close friend of Lovato's.)

While Lovato didn't comment on her rumored new boyfriend, Max Ehrich — who she is reportedly quarantined with — she did tell Jamil that she's enjoying self-isolation and the chance to work on herself. "I haven't created much while I've been quarantining, but I have been doing a lot of growth and that's journaling, meditating ...things like that," Lovato said, also joking, "I'm much more used to self-isolation ... I was like, 'This just feels like rehab.'" With her sense of humor about her experiences and no more toxic people in her life, it looks like there's nothing that can stop Lovato going forward.