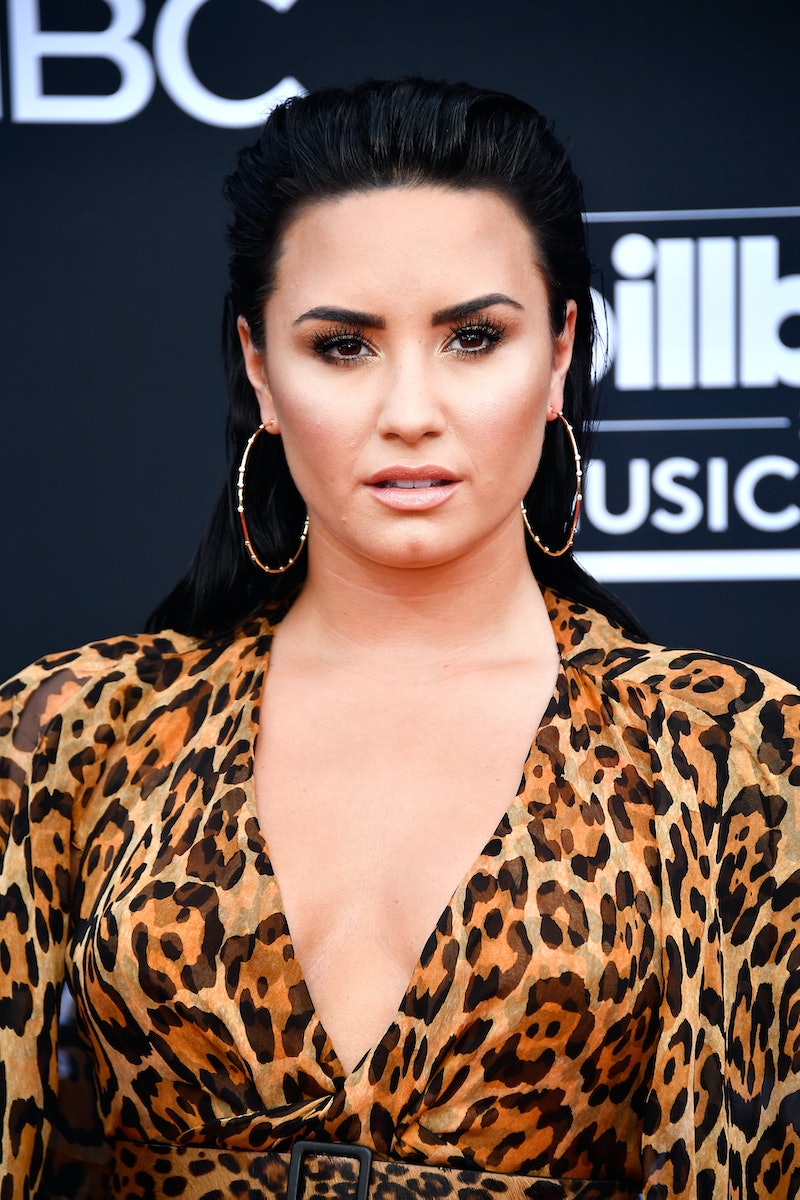 It's not every day that you get to work with one of your idols, but for Demi Lovato, that's tonight, and she's slaying beforehand. On the red carpet, Demi Lovato's 2018 Billboard Music Awards dress is one of night's first major fashion moments in what's sure to be some major looks for the star during the show. Perhaps the biggest moment, though? Well, it's got nothing to do with fashion. She's performing with mega-talented icon Christina Aguilera, and Lovato's red carpet ensemble is proof that she can prepared to slay the carpet, the performance, and the entire night.

On the red carpet, Lovato looked ready for her upcoming performance by first crushing it with her ensemble. As she exited her car and entered the carpet area, fans got their first look at her leopard print dress that featured open, cape-style sleeves and a plunging v-neckline. Once she officially hit the carpet, fans were able to see the full length maxi dress that honestly, looks so cool, as in actually cool, since the show is, in fact, in a very warm Las Vegas. Keeping the rest of the look simple (she is wearing animal print after all), she paired the dress with black heels.

For her hair, Lovato kept her long bob slicked back in a chic and minimalist style, and wore minimal jewelry along with her ultimate party dress. Unfortunately, Lovato doesn't seem to be walking the red carpet with her co-performer Christina Aguilera, but both are making their way into the show.

How gorgeous is that neckline?

Lovato's attendance at the Billboard Music Awards is obviously in part due to her joint performance with superstar Aguilera where they'll be doing a debut performance of their song "Fall in Line." The anthem is a call for women to know their worth and resist systematic oppression and societal pressure. Plus, it's all this while the pair show off their next level vocal talents. Fans of both singers will get to experience the song live later tonight.

The two singers have been fawning (in the best way possible) over one another on social media since they teamed up for the song which will be features on Aguilera's upcoming album Liberation. Lovato called Aguilera, "one of the most inspiring individuals I’ve ever met," while Aguilera said that Lovato is, "an inspiration for future young girls of your generation." Clearly, there's some serious love between these two inspiring women.

The performance, however, isn't the only reason Lovato is walking the red carpet tonight. This is an award show after all, and she's up for some serious awards. She's been nominated in three categories: Top Female Artist, Top Social Artist, and Top Dance/Electronic Song for her work with Cheat codes on "No Promise." Basically, tonight is a big night for Lovato.

The night isn't just a fashion moment for Lovato, though. By performing "Fall in Line" at the show with Aguilera, she continues to speak on issues close to her heart. Lovato has been vocal about her previous experience with eating disorders, addiction, and mental health, and she's opened up about her sexuality as well. The debut of "Fall in Line" on the stage is another major moment.

It's similar to one she had on the red carpet of American Music Awards. Last year, Lovato's date to the 2017 awards show was Danica Roem, the first trans state legislator in the state of Virginia. Lovato explains that she was inspired by Roem and that spurred her decision to bring the legislator.

Tonight, at the Billboard Music Awards, Lovato performed with another woman who inspires her: Christina Aguilera. While her red carpet appearance may not have been political in nature, Lovato is a slayer of red carpets because of both her style and her activism.