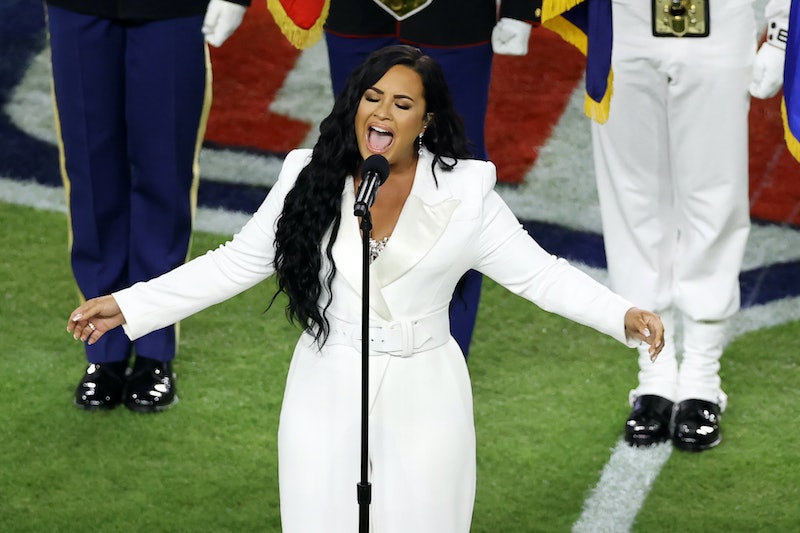 Whether you’re rooting for an actual team or you’re simply here for the commercials, the Super Bowl usually has something for everyone. Take, for instance, how the big game gets started: Someone sings the national anthem to kick off the festivities, and depending on the performer, that in and of itself can become an unforgettable moment in pop culture history. Who among us can forget Whitney Houston’s iconic performance at Super Bowl XXV in 1991? Clad in a red, white, and blue tracksuit, she delivered one of the most legendary renditions of “The Star Spangled Banner” ever. Without a doubt, Houston has some tough shoes to fill.

For Super Bowl 2020, the task fell on the shoulders of Demi Lovato, who moved viewers with her own interpretation of the national anthem. Lovato opted to keep her look clean and classic with a monochromatic white jumpsuit by Sergio Hudson. Underneath, she wore a blinged-out, bejeweled bustier by Ermanno Scervino. She accessorized with diamond teardrop earrings and rings by Tacori, along with Stuart Weitzman shoes.

Her Super Bowl appearance comes one week after her performance at the 2020 Grammys, where she also went with an all-white ensemble. She wore a voluminous gown by Christian Siriano, which featured dramatic long sleeves and stud detailing around the chest and waist. She topped off the look with diamond earrings and a diamond ring, which perfectly complemented her embellished crystal manicure.

At the Grammys, Lovato debuted a new song called “Anyone.” The occasion marked a major moment for the singer ⁠— it was her return to the stage since her overdose back in July 2018. Clearly emotional, Lovato had to restart her performance after initially struggling to hold back tears. Ultimately, she was able to push through and perform the song in its entirety, garnering a lengthy standing ovation from the crowd.

With these two major performances now under her belt in just a week’s time, it’s safe to say that Lovato’s big comeback is in full swing.