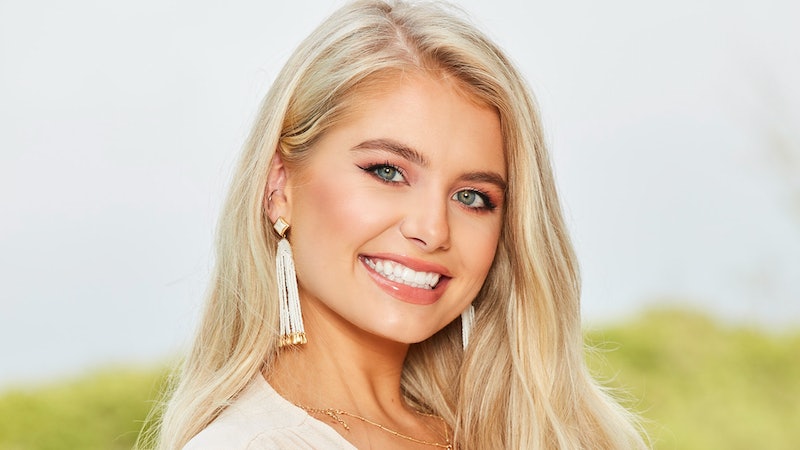 If you need some humor to get you through the Bachelor in Paradise mess, allow Demi's reaction to the Blake and Caelynn drama to assist you. Demi, who headed to Mexico after appearing on Colton Underwood's Bachelor season, couldn't help but share some of her thoughts about Blake and Caelynn on Twitter and Instagram during Tuesday's Paradise episode. Her many responses are totally relatable and will make at least part of Bachelor Nation feel seen.

For Demi, she's found the best way to cope with all of the drama is through humor. As she tweeted during Tuesday, Aug. 6's explosive episode, "I love y’all and I’m sorry but I cope with humor." When it comes to this type of complex mess, Demi's strategy isn't completely wrong. She isn't making light of the situation or anyone's feelings, but there's no denying the drama with Blake and Caelynn is uncomfortable to watch play out on television and in real life. Like Demi also tweeted, "The Blake and Caelynn scandal has me team neutral. Not my business so I can’t comment anymore. But I am here to watch this dumpster fire go up in flames."

The above tweet was shared after she made several comments on Twitter in response to Blake and Caelynn. She, like viewers, can't help but react. Who can blame her?

So, if you too feel like Demi, you will most likely appreciate her reactions. Here they are:

Welcome Back To Reality, Blake

Or so it seems.

Where are these screenshots?

Demi Speaking For The Fans

For those who need a brief recap about Blake and Caeylnn, let's discuss. Blake and Caelynn hooked up at the Stagecoach Music Festival in April prior to Paradise. Caelynn said she felt like their time together was more than just a fling and admitted she felt hurt when learning Blake had hooked up with fellow Bachelor alum Kristina one night before.

Caelynn also claimed that Blake called their hookup a "mistake" and told her to keep it all a secret during Paradise filming. Both Caelynn and Kristina confronted Blake about the situation, which resulted in Blake sharing reported screenshots of his text conversation with Caelynn as a way to defend himself. One of the texts from Caelynn reportedly said, "If I come over it’s strictly for sex. Nothing more, nothing less."

In a lengthy Instagram post, Blake explained why he released their reported text exchange. "I wanted to take time to address what is being portrayed in the episodes," his post read. "I made a lot of mistakes this past year that I’m not proud of. I know some people don’t think this show is real, but it is. It is very real. Everybody handles heartbreak differently and everybody handles the public eye differently. I have a lot of insecurities I’ve been struggling with and lost myself this year. I’ve gotten way in over my head with women and have made a lot of mistakes and although never my intent, I hurt several people along the way."

Blake has since deleted the text screenshots and wrote in his Instagram Story, "I am going to delete the text messages. I never wanted Caelynn to get attacked like this. Please stop attacking her." He also apologized in an Instagram Story video and said, "Releasing the text messages is the last thing that I wanted to do. I know that it's not good but I feel like I have no other choice but to release those." He continued, "I hope Caelynn can forgive me one day, but with my character and my name being attacked like that, I feel like I had no other choice." Caelynn has yet to respond to Blake's text screenshots and Instagram posts. (Bustle previously reached out to both Blake and Caeylnn for comment, but didn't receive an immediate response.)

This all is one big mess that has fans extremely confused. Thankfully, at least Bachelor Nation has Demi to ease some of the awkwardness.