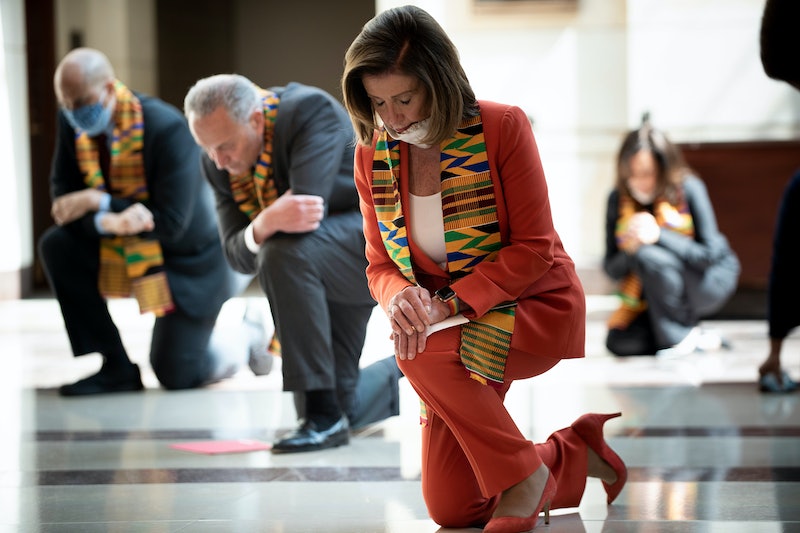 On Monday, a group of Congressional Democrats — including House Speaker Nancy Pelosi and Senate Minority Leader Chuck Schumer — unveiled a police reform bill that aims to increase law enforcement accountability, change policing practices, and eliminate racial profiling. But what the lawmakers wore quickly outshined the specifics of the proposed legislation. One by one, the elected officials stepped in front of the Capitol Hill cameras with kente stoles draped over their suits, and viewers everywhere let out a collective sigh.

Kente cloth originates in Ghana, and it’s made using colorful strips of silk and cotton that are interwoven into vibrant shapes and patterns. The patterns’ complexity varies depending on the tribe and weaver.

If you’ve seen a kente stole before in America, it was likely at a graduation ceremony: It’s common for Black students to wear kente over their cap and gowns to show cultural pride.

Despite kente being indigenous to Ghana, in Western countries — particularly in the U.S. — it's wrongly viewed as a catch-all sartorial symbol for the entire African continent. In short: While kente is now more visible in the Western world, donning kente — especially as a non-Black person — is definitely not an automatic way to show solidarity with the Black community.

Members of the Congressional Black Caucus have previously worn kente stoles at the State of the Union to protest Trump’s well-documented xenophobia. They also recently wore kente cloth after the passing of Rep. Elijah E. Cummings, when he laid in state at the U.S. Capitol Building. But in these instances, the gestures were kept within the confines of the Black Caucus.

They decided to broaden that circle ahead of the lawmakers’ announcement Monday, suggesting that sporting kente was intended as a unifying gesture.

“The stoles read as a vague and confused declaration by lawmakers that they stood together out of respect for the African-ness of their fellow citizens,” Givhan writes. “What they needed to emphasize with their stagecraft is that this is a particularly American issue — a defect woven into our own country’s fabric.”

Taking that perspective into account, “I can’t breathe” or Black Lives Matter paraphernalia may have been a more appropriate move that may not have been viewed as outright pandering. What’s more, a BLM or “I can’t breathe” T-shirt would have underscored why the lawmakers had gathered together in the first place: to address the systemic police brutality disproportionately killing Black men and women.

Wearing kente cloth, a marker of rich heritage and cultural pride, comes across as both an oversimplification and a misreading of the real issue at hand.

More like this
Aerie’s Curve-Hugging Offline Leggings Will Give You A BBL In Seconds
By Bella Gerard
This 'One Tree Hill' Wardrobe Error Is Going Viral On TikTok
By Brad Witter
5 Signature Accessories Carrie Bradshaw Wore Over & Over Again In SATC
By Dominique Norman and Kelsey Stiegman
I Tried Kendall Jenner's No-Pants Look As A Plus-Size Woman
By Sarah Chiwaya
Get Even More From Bustle — Sign Up For The Newsletter
From hair trends to relationship advice, our daily newsletter has everything you need to sound like a person who’s on TikTok, even if you aren’t.