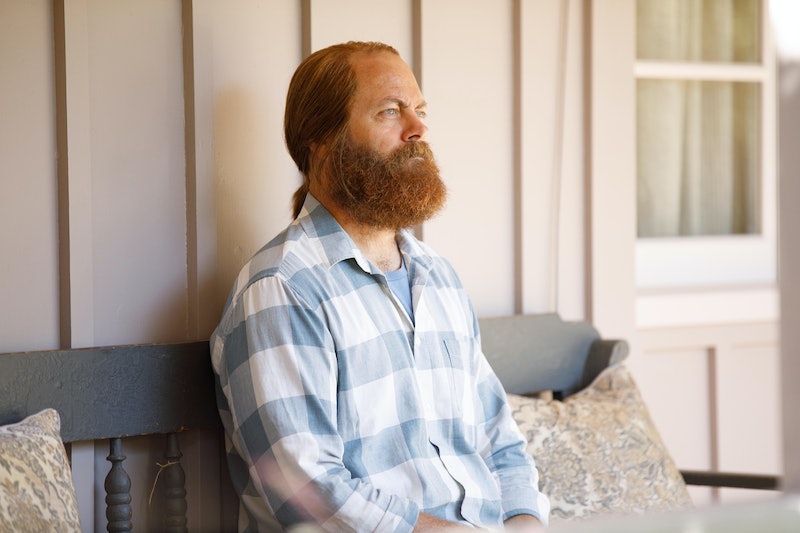 On the March 26 episode of FX's Devs, we get our most comprehensive look yet at what the computer program being developed at Amaya can do. Forest's deputy Katie, who previously rebuked her colleagues for using their technology to pry into others' private lives, spends the entire episode leafing through the pasts of the show's central characters. What that means for viewers is 45-minutes of pixelated, gold-flecked flashbacks. Those from the recent past move the story forward (we see that Kenton threatens Jamie but doesn’t kill him, for example). But Katie also probes the distant past, revealing, at last, what happened to Forest's daughter.

Sergei's death may have kicked off the series, but that's not where the story of Amaya starts. Years earlier, Forest formed Devs to see if it was possible to recreate past events, seemingly on a quest to spend additional time with his daughter (and the namesake of his tech company). This week, we learn that Amaya and her mother were killed in a car crash as Forest watched from outside their home. Though he didn't directly cause the accident, Forest feels tremendous guilt over their deaths, as he and his wife were on the phone when it happened. They were negotiating who would go buy the milk he forgot to pick up earlier that day.

The determinism versus free will debate that the Devs team has been having all season is revealed for Forest to be less philosophical and more personal. If their project is successful — thus proving everything is predetermined — then he can finally forgive himself for the death of his family. They would have died even if he had let his wife hang up the phone. They would have died even if he remembered the milk, or called five minutes earlier, or two minutes later.

It's why Forest so forcefully rejects the possibility that there are different versions of the future and of the past. As early as the pilot episode, he sneers at "alternate realities" as an explanation for why Sergei's projections are unstable. Forest doesn't need Devs to ratify determinism. He needs it to find absolution.

More like this
Everything To Know About 'And Just Like That...' Season 2
By Jack Irvin and Grace Wehniainen
These Clues Suggest 'Velma' Season 2 May Be On The Way
By Grace Wehniainen
6 'Happy Valley' Easter Eggs You May Have Missed
By Sophie McEvoy
Claire Foy Spoke Out About 'The Crown's Gender Pay Gap
By Sam Ramsden
Get Even More From Bustle — Sign Up For The Newsletter
From hair trends to relationship advice, our daily newsletter has everything you need to sound like a person who’s on TikTok, even if you aren’t.