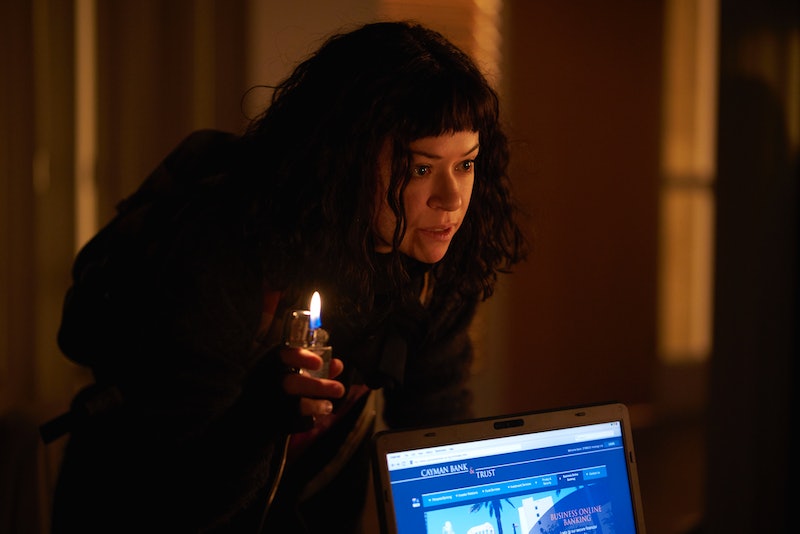 For the final season of Orphan Black, Sarah and the clones she has aligned with need all the help that they can get. The Season 5 premiere had Felix assisting Scott to find M.K. and the previews for the June 17 episode, "Clutch of Greed," show that M.K. returns to Orphan Black. As she'll presumably put her hacker skills to good use, she'll be an invaluable asset to Sarah and the gang. M.K. is the one clone who survived the Helsinki incident and considering that it wouldn't hurt if Sarah had more clones on her side, is there any way that other clones survived Helsinki on Orphan Black? While it's more than a long shot, having another Helsinki survivor could be a way for Orphan Black to introduce one last new clone for Tatiana Maslany to play in the final season.

If you need a refresher on the horror that was Helsinki on Orphan Black, it was a plan orchestrated by Dyad's parent company Topside to kill a significant number of clones who had become self-aware. The reclusive hacker M.K. was a part of this "solution" that was overseen by Ferdinand Chevalier. Known then by her real name Veera Suominen, she was the lone survivor of this attack with the scars on her face to prove it. All in all, six teenage Leda clones were killed in 24 hours, including M.K.'s only friend Niki Lintula. That's why in "From Instinct to Rational Control" in Season 4, M.K. used Sarah to track and exact her revenge on Ferdinand.

Although it seemed fair to be suspicious of M.K. after she betrayed Sarah, she returned again by contacting Kira in Season 4, Episode 8 to help Cosima and Sarah by informing them that Evie Cho of Brightborn was planning another Helsinki to kill them. Knowing that M.K. supports Sarah and her other sestras, it seems only right that Felix should trust her and it should be good news that she's returning for "Clutch of Greed."

Yet, the preview for the second episode of Season 5 also shows that Ferdinand will be returning, which raises questions about Helsinki and if there is any possibility that another clone survived Ferdinand's deadly plan. Beyond what is shown on the BBC America show, there is actually much more information out there in the world about M.K. and Helsinki. That's because the Orphan Black creators dedicated a five-part comic book series to this backstory.

As a fan explained on the Science Fiction & Fantasy Stack Exchange, the six clones who were killed as part of Helsinki, as outlined by the comics, were Justyna, Jade, Fay, Femke, Niki, and Sofia. (This is slightly confusing since although Ferdinand said he always "suspected one clone escaped the purge" in "From Instinct to Rational Control," he presumably included M.K. when he said there were six dead clones from Helsinki in the Season 3 premiere since he didn't know she was officially alive — but just go with it.) The German clone Katja Obinger was also involved in the Helsinki comics, but was not successfully eliminated like the others. Yet, fans saw her murdered in Season 1 by Helena, so even if you could consider her a survivor of Helsinki, she's most definitely no longer alive.

With the information provided in the comics, it seems fairly safe to say no one other than M.K. made it out of Helsinki alive. But if there was anyone else who survived, it could be a major twist and offer up an easy way for Maslany to play another clone (something I require from the final season). However, I'm more inclined to believe that the Helsinki story on Orphan Black will end with M.K. and Ferdinand — and no one else. Because as much as I want to believe that another clone survived that eradication, the fact that one else did is what makes M.K.'s vengeance so pure and what makes Ferdinand so purely evil.