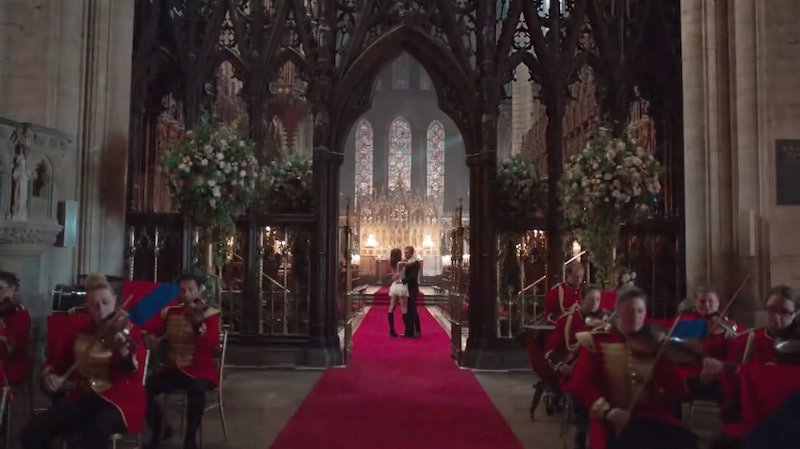 Spoilers for The Royals Season 4 finale follow. In a move that mirrors the real British royalty, The Royals host the royal wedding of King Robert and Willow in the Season 4 finale. But after a particularly heartwarming moment, it seems like Eleanor and Jasper could marry on The Royals too. While he doesn't follow tradition and get down on one knee, Jasper kind of proposes to Eleanor in the finale. It's more a strong profession of love and the acknowledgment that he would marry her at anytime because of how much he loves her, but it's not like fans would disapprove of a Jaspenor engagement. In fact, it would be much preferable to the Robert-Willow wedding that occurs. So even though Jasper and Eleanor don't end up getting married in the Season 4 finale, it seems like their wedding could be on the horizon.

As Eleanor laments that all the work she has put into the royal wedding is a "waste" since Robert doesn't seem to really love Willow, Jasper steps in to make her feel better. "If you ever feel like this is going to waste, you just look for me with those perfect, pretty eyes and we'll make sure at least one couple gets out of here happy and together," he says. Does he mean that if Willow had exposed Robert and called off the wedding (like she had said she was going to) that they would have gotten married instead? Well, Eleanor wonders the same thing since she asks, "Did you just propose to me, Jasper?" He responds, "Not in the way that I'd want to. Not even close to the way that you deserve, but I love you so much, princess." He then tells her that he'll always be there and she says she'll love him for the rest of time. So, uh, did they just make things unofficially official?

With everything else that's going on during the Season 4 finale, The Royals doesn't show the pair speaking this intimately again. And because Willow ends up saying, "I do," at the altar, there's no reason that Jasper and Eleanor need to swoop in like at the end of a rom-com and get married. Plus, they're much too busy looking horrified that Willow has changed the plan and possibly betrayed them to Robert. So while many fans on Twitter said that they would have preferred Jaspenor to get married over Robow (the E!-approved 'ship names), Willow really does become Robert's wife while Jasper and Eleanor apparently stay boyfriend and girlfriend.

Robert and Willow's nuptials are not good news for the rest of the royal family since they have been committing treason against the king. But you can view their marriage in a positive light when it comes to Jasper and Eleanor's future. What Eleanor put together for Robert and Willow's big day was beautiful, but she and Jasper deserve their own wedding that's tailored to their tastes and true to them. If they don't end up being thrown in jail by Robbie, this gives them the chance to plan their own wedding. And perhaps it even means that next season, Jasper will propose again in a way that he feels is more worthy.

Unfortunately, a Season 5 of The Royals hasn't been announced yet, so that kind of puts a major damper on the wedding plans of Jasper and Eleanor. But after that scene in the church, fans are going to demand another season just so that they can see Jaspenor get married. And the good thing is that even if Jasper and Eleanor don't consider themselves formally engaged, they committed to each other for life. How far they've come since Season 1!

With The Royals, there's always a chance that they'll be pulled apart again. (Say, for instance, if Robert arrests Jasper for treason.) But this couple has already gone through so much that it felt like fans had earned this scene where they so genuinely profess their love to one another. Because for all of the insanity that surrounds the palace, they know what they have with each other is real and forever. And with a love like that, who needs a fancy engagement? But with that being said, E! — please let The Royals throw a big, Jaspenor wedding in Season 5. Not only to hear their beautiful vows — but to see Eleanor's undoubtedly fabulous dress.