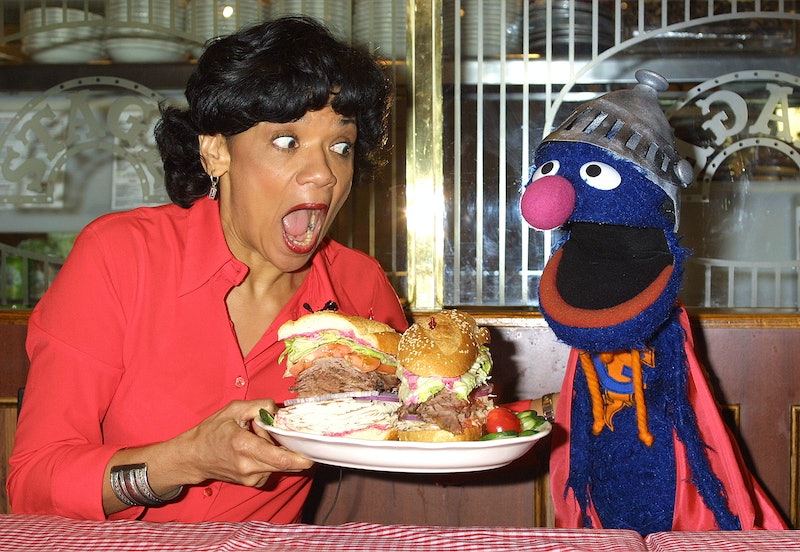 Brought to you by the letter F? A viral clip positing that Grover dropped an F-Bomb on Sesame Street has had Internet users hitting replay in numbers higher than the show's target audience could even begin to count. "My wife and I discovered this Sesame Street black magic yesterday while my daughter was innocently watching her “Melmo” and now it has gone viral after I put it on Reddit," a North Carolina father named Thomas Schroder tweeted on Dec. 27 along with a video of the beloved blue Muppet weighing in on pal Rosita's idea to move a camera.

Thus began a hearing test of sorts for the ages. As Schroder quite aptly pointed out, the ensuing debates really have been reminiscent of this May's Yanny or Laurel argument — and even had similar fervor as when the 2015 blue-black or white-gold optical illusion dress also had the masses collectively questioning their degrees of sanity. (The clip went viral after journalist J.D. Durkin shared Schroder's discovery.) The more times users listen to the clip from the PBS children's educational program (first-run episodes now air on HBO), the more their minds seemed to be playing tricks. After all would Grover really drop an F-bomb? Unlikely.

As was the case with the great "Yanny or Laurel" debate of 2018, users' perceptions likely had much to do with a combination of how and where each person is listening to the video. Either way, Twitter didn't disappoint, of course, when it came to sharing opinions on what was really going down on Sesame Street.

The hoopla even reached the ears of actor Yvette Nicole Brown who weighed in on Twitter with her definitive assessment: "I can hear both interchangeably. I'm weird like that. But that said, my beloved Grover would NEVER drop the F-Bomb on the Street o' Sesame. So what he said was: "Yes, that sounds like an excellent idea!" #ItIsDone"

Brown, of course, wasn't the only social media user to hear the phrase both ways — while simultaneously refusing to believe the the innocent Grover would ever udder such a word. "I hear Grover swearing," wrote another perplexed fan. "I don't believe Grover actually swore. I'm confused and will need some time with my thoughts as I try to figure this out."

Others invoked higher powers, flat-out refusing the entertain the notion that Grover is anything but pure. "Y’all ain’t gone soil my Grover on this blessed day. Nuh un," wrote user @goldietaylor. Added @girlsreallyrule: "Not today, Satan."

Some people comically thought that it "makes sense" that Grover would curse — and saw the obvious humor in the situation. After all, it is hard out here in these (Sesame) streets. "You can take Grover out of the streets but you can't take the streets out of Grover," joked user @Beezer82.

The jokes kept on coming, with another user comparing Grover's debatable response to "when someone asks if I want to go out to eat."

Another clever Twitter commenter made a comparison to comedian Kevin Hart's exit from hosting the Academy Awards amid controversy over past tweets. "Looks like Grover won't be hosting the Oscars after all," posted comedy writer Mike Morse.

The recent New York City alien invasion scare (AKA a power plant explosion) had nothing on the Grover dispute, wrote @mwertlieb: "Wondering what it says about me that I'm more freaked out about whether Grover dropped an F-bomb on Sesame Street than what caused a massive blue-green light to appear over the NYC skyline."

In the end though, it seems Schroder may have the right idea. "I think it’s time to break the silence @Grover," tweeted the man who claimed responsibility for the discovery. "How about you and I meet up on @sesamestreet and have a totally SFW conversation about how our ears and eyes can deceive us..."

After all — regardless of what you think Grover really said — the debate has all the makings of a teachable moment. Only, ya more, more along the lines of adult education...