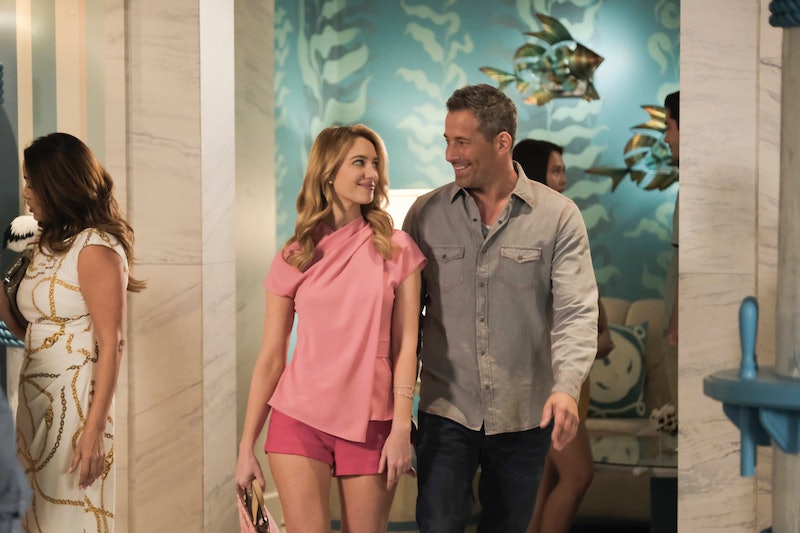 In the world of Jane the Virgin, if someone goes missing or is murdered, it's not a bad idea to think that Rose has something to do with it. So when Chuck says he didn't kill Scott and that he saw a mysterious woman the night of Scott's death during "Chapter 62," it's completely fair to wonder if it might have been Rose. While Petra and Anezka's mom certainly has more of a motive to kill her son-in-law than Rose presumably has, I'm willing to consider Sin Rostro as a suspect — but why would Rose kill Scott on Jane the Virgin? If she did do it, her reasons are far from clear right now.

As the May 8 episode reveals, Chuck may be Jerky Pants (aka J.P.), but he is most likely not responsible for Scott's murder. Instead, he claims he was supposed to meet up with Scott the night of his death, but Scott never showed. Instead, he ended up meeting a woman on the beach, whom he shared his flask of whiskey with. She gave him a shell bracelet from her own wrist, saying it was good luck — and the shells from her bracelet happen to match a shell that was found next to Scott's body. Thankfully, Chuck remembers exactly how the woman looked, but in typical Jane the Virgin fashion the series is keeping that knowledge away from fans for now. But by the look on Rafael's and Petra's faces when they see the composite sketch, they know exactly who the mystery woman is.

That means it is a possibility that the woman from the beach could be Rose — or more accurately, Bridget Regan's Rose disguised as Elisabeth Rohm's Eileen. "Eileen" and Luisa came back to the Marbella for "Chapter 60" and when Luisa found out that Scott's death may have been a murder, she worried it was Rose since the pair of them had been at the Marbella when he died. Rose had a pretty believable alibi (if you can't remember, it hilariously involved lube, Chinese food, and showers) and I was willing to believe that Eileen/Rose had turned over a new leaf — at least when it came to murders at the Marbella.

Yet, while Rose may never wear a shell bracelet, that is totally something that Eileen would wear. But what's also important to keep in mind is that there was actually an Eileen before Rose assumed her identity. Eileen said to Luisa in "Chapter 60" that, "We sent away the real Eileen." If Rose didn't kill Scott, could it be possible that Chuck just happened to run into the real Eileen? I don't think Eileen killed Scott, but if Chuck saw her this reveal will lead to questions about Luisa's girlfriend's whereabouts and real identity. The timeline isn't perfect in that scenario, but it's worth a bit of speculation.

Rose could have also been walking the beach out of her mask that night when Chuck saw her. That seems foolish for the criminal mastermind, but she doesn't like to stay at the Marbella and may have needed some fresh air. That goes against her alibi though — but fans on Twitter certainly don't seem too concerned about that since many people just assume the sketch has to be of Rose.

While Rose is more than worthy of suspicion, I'm still thinking that this is one death she isn't responsible for. And until I find out where Magda has been the last three years, I'm going to continue to worry about Petra and Anezka's mom. Or, for that matter, Rafael's mom. Sure, viewers saw Elena die, but that's not enough for me to write her off — especially when you consider her interest in the Marbella and surrounding properties. But whichever dangerous woman killed Scott, fans may have an answer before Season 3 comes to an end.