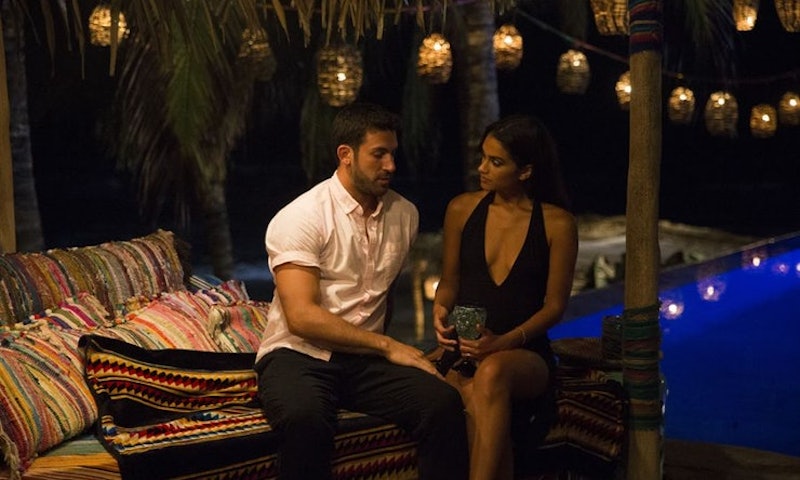 Season 4 of Bachelor In Paradise is finally coming to an end and my, what a ride it has been. This time around, controversy has reigned supreme and fans have had to endure some seriously tumultuous breakups and makeups from week to week. If there is couple that has given fans a glimmer of hope that true love can exist in a resort bubble filled with previous Bachelor/Bachelorette castoffs in Mexico, that adorable couple is Taylor and Derek. These two paired off right from the jump and after cultivating some serious chemistry, they were one of the few who managed to snag a private evening together. So, did Taylor and Derek have sex in the Bachelor In Paradise fantasy suite?

Derek and Taylor have certainly had moments throughout the season where they have been very openly affectionate with one another. They are clearly really feeling each other and it is well known to the other cast members that they are an item. Would it be shocking if they slept together once they were far away from any and all prying eyes that have surrounded them for the past few weeks? No, it wouldn't be shocking at all. Obviously, it really isn't any of our business whether or not these two decided to go for it on their fantasy suite date. When all is said and done, they are two consenting adults who dig each other a lot, so whatever happened in there, more power to them.

The first indication that these two would take things to the next level happened when Derek actually joked to Taylor during last week's episode that they had to have sex three times in the fantasy suite, and then they could get engaged. Taylor played right along with it, so they were at least already comfortable openly chatting about it, even if it was slightly joking. They definitely seem to be getting closer and closer as the weeks go by. They even shared a really vulnerable conversation on the beach (in front of cameras), where they expressed serious love for each other, and they have repeatedly stated that they could see themselves as life partners. When the time came to choose sleeping in the fantasy suite together or separate rooms, they chose to stay together, without hesitation. Taylor even flat out told Derek during their date that sex was an important next step for her to really connect with him and be able to determine whether they were truly compatible.

The thing is, no matter what went down in that private evening together, I am pretty sure that this couple is one of the lucky ones that are going to make it all the way. Once they leave Mexico, I can honestly see them staying together for the long haul. But, even if they just hung out all night and talked, that would be a huge step for their relationship because it is the first time that they actually get to be truly alone. All this time, there have been cameras, drama, and other contestants surrounding their every move and every conversation.

While we haven't got confirmation that they slept together during their fantasy suite date (and it is really not anyone else's business), they spent the evening alone and together, which is all that matters for their relationship.