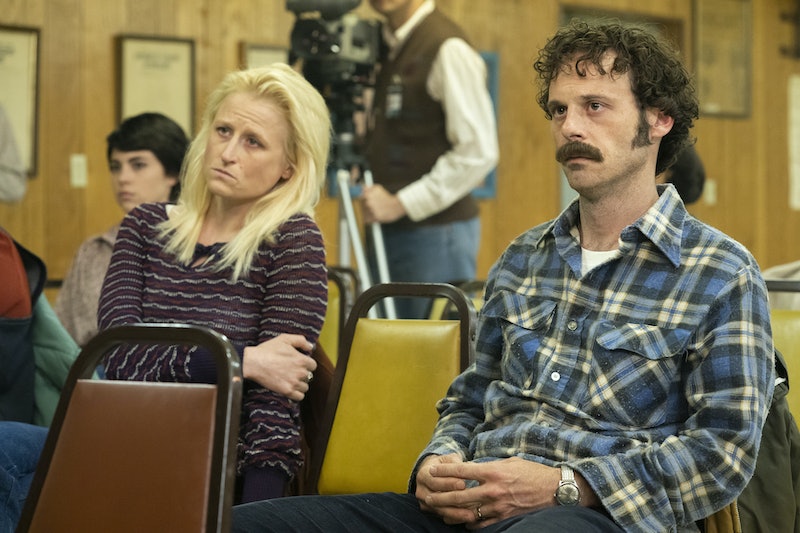 After five episodes, how Will Purcell died and who took his sister Julie on True Detective Season 3 is still a pretty big mystery. But "If You Have Ghosts" certainly brought Tom Purcell back into the picture as a suspect. While it might seem unlikely, there's a decent possibility that Tom killed Will on True Detective. A couple of clues popped up during the Feb. 3 episode that insinuated that the mourning father is not as innocent as he seems. And even if he didn't kill his son, there's definitely something going on with Scoot McNairy's character — it's simply a matter of what.

Although he hasn't really been a suspect since the first episode, the tide turned for Tom in the 1990 timeline when his missing daughter Julie called into the tip line. Mahershala Ali's Wayne Hays and Stephen Dorff's Roland West ask Tom to come listen to the recording where a scared-sounding woman states, "Tell him to leave me alone. I know what he did." When the police officer on the phone asked who, she replies, "The man on TV acting like my father!" This followed Tom's televised plea for any information regarding his missing daughter, so Hays and West have a reason now to be suspicious of him even though they ruled him out as a suspect a decade ago.

At Will's funeral in the second episode, "Kiss Tomorrow Goodbye," Tom's parents told Hays and West about the speculation about Julie's parentage. Louise Purcell clearly didn't approve of her daughter-in-law Lucy, but she mentioned that Tom might have been working offshore or welding in Texas when Julie was conceived. So it seems those Julie is addressing those rumors/possible truth when she says, "The man on TV acting like my father!"

But Julie also mentions, "I know what he did." When Lucy first found out that Will and Julie were missing, her first reaction was to berate Tom and ask, "What did you do?" It seemed like a dispute between an estranged married couple, but now it appears like Tom is guilty of something.

However, Julie (if that even was Julie) probably wasn't just referring to Tom during the phone call. When asking about what happened to her brother Will, she says, "I don't know what he did to him." When the police officer asked whom she's talking about this time around, she doesn't respond. "We left him resting," Julie says. "He took me and I'm never coming back." The male she is referring to in this train of thought could very well not be Tom, whom she wants to leave her alone.

In 2015, the crime still hasn't been solved, so the detectives didn't find anything solid on Tom to connect him to Will's death and Julie's disappearance. Yet, West doesn't want to speak about Tom when Hays comes to visit in the present. Hays tells West his theory that Lucy was responsible for the cryptic note about the kids to "make Tom feel better." West replies, "So what? So what if she did? We already knew she had some connection to — that guy whose name you just said."

Since West and Tom were buddies, something clearly happened when the investigation was reopened in 1990 that makes West not even want to speak of Tom. It's also a very strange way to refer to a married couple, so his comment puts into question Tom and Lucy's real relationship. So could that mean that Tom did have something to do with Will and Julie's disappearance? Or does it mean he had something to do with Lucy's death in Vegas year later?

Another angle is that in the preview for future episodes, it looks like Tom is assaulting Freddy Burns in the '90s. (You can see it in the below video at 40 seconds.) Freddy was one of the last people to see Will alive, so maybe Tom tortures or even kills Freddy for information and that's why West no longer wants to speak his former friend's name. Or, even worse, maybe West and Hays killed Tom either because of what he did to Freddy or because they mistakenly thought he was responsible for Will's death. After all, West cryptically refers to "what we done" and more directly mentions "killin' a man" in the present.

While it's valid to really consider that Tom isn't Julie's father, it seems that her phone call in 1990 could be a bit of a red herring to make you suspect McNairy's character again. But even if he didn't kill Will or hurt Julie, there's a major secret about Tom that's part of the entire True Detective Season 3 mystery.