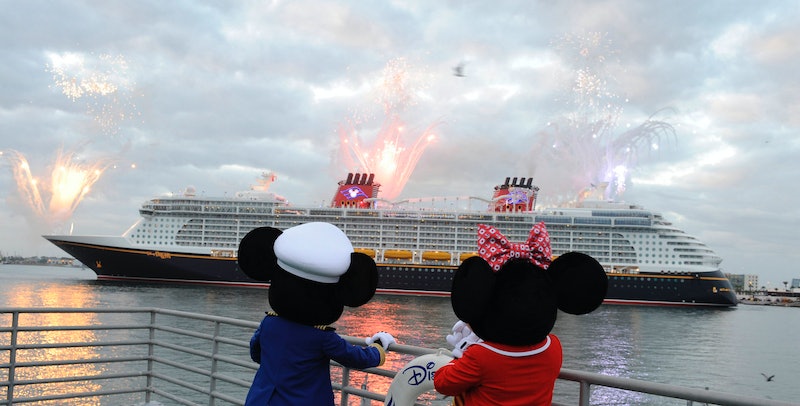 You guys, Halloween is almost here. Four months away counts as "almost here," right? Anyway, it's never too early to start planning your festivities. Personally, I start planning November 1. Anyway! If you like a good spook and don't get seasick, Disney Cruise Line announced Halloween on the High Seas, so grab your costume and a life vest, because stuff's about to get real — real scary.

According to the Disney Parks Blog, the adventure begins this September. Each Disney ship will undergo a makeover to become a spooktacular wonderland for Halloween on the High Seas. Mickey and all your best pals will be there in their costumes for all kinds of fun happenings, like a "mouse-querade" party, dancing, games, ghost stories, and even costume contests and nighttime dance parties for the adults. And don't forget the infamous Pumpkin Tree, which magically transforms as a caretaker tells you stories.

Other things you can plan on? Disney Cruise Line news says there will be a Nightmare Before Christmas interactive "sing and scream," and you'll even get to meet Jack Skellington and Sally afterward. BONUS. (P.S. Parents, bring Advil.) I know you're all probably wondering about the food, too. What's going on with the food?

Fear not (or... maybe you should) because the Disney chefs have all kinds of goodies in store, like chocolate cake with pumpkin filling, spider cakes, and "Spooky Juice." As long as it doesn't give me food poisoning after, I'm down. And we need to talk about these spiders, first. The only time I go near spiders is when I'm drowning them in Raid; so please clarify what the spider cake is about.

Oh, and candy. Yes. There will be candy. Lots of it. Keep your dentist on speed dial.

Think you have to go far to find a Halloween celebration near you? Maybe not. Disney has cruises leaving from New York City (the Disney Magic ship), San Diego (Disney Wonder), and Port Canaveral (Disney Fantasy), says the blog. The routes are all different and the lengths of the trip vary, so take your pick.

Let's face it: when it comes to Halloween, nobody holds a candle to Disney. In fact, make that any holiday. In fact, make that LIFE! Nobody does anything like Disney does. I give you Exhibit A: Hocus Pocus. It was released in 1993 (when, ironically, it flopped in theaters) and still, to this day, is one of the funniest, silliest, Halloweeniest, most quotable movies we know.

It's so good, in fact, that a remake is supposed to be in the works — although Vanity Fair once said the original Sanderson sisters won't be in it, in which case, I say we riot.

Even when we can't go on cruises or watch remakes of our favorite '90s flicks, we find ways to celebrate Halloween with Disney as our inspiration. Maybe we do our makeup so we look like the Cheshire Cat, or perhaps we dress up as Disney princesses, because age limits? I defy you. Or, if you're anything like me, you spend Halloween night watching the original HP, eating all the candy that was meant for the trick-or-treaters, turning off your lights at 7 p.m., and pretending nobody is home. This is what old looks like. I also tell children to get off my lawn.

Any way you cut it, we couldn't do Halloween without Disney.

Stock up on your Dramamine and grab your tickets now, because something tells me the spots on the Disney Halloween on the High Seas cruises are going to disappear faster than the snack size KitKat bars in my candy bowl.