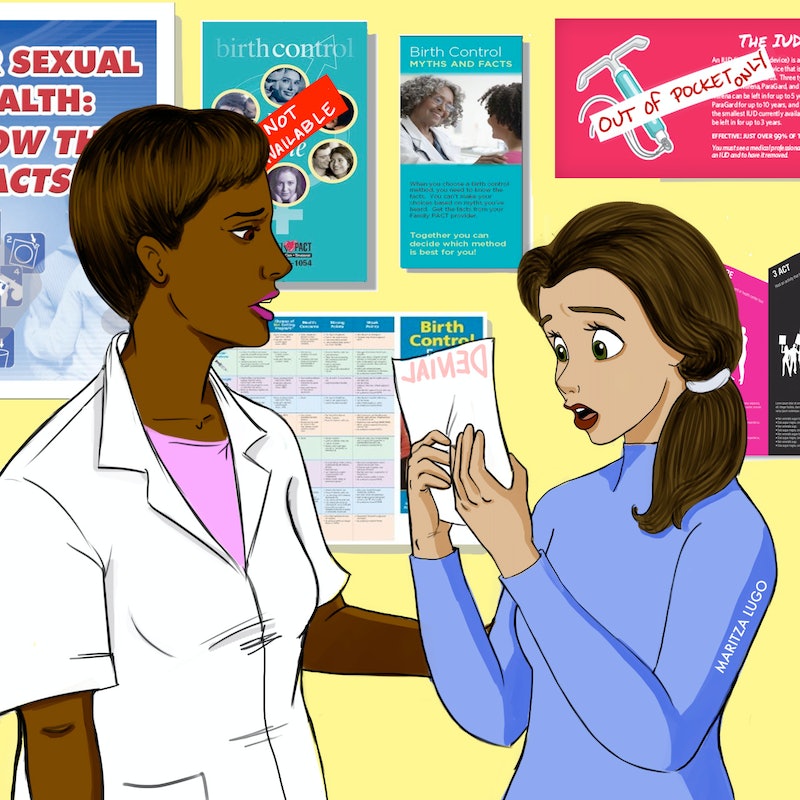 We've seen Disney Princesses re-imagined as Millennials, as older women, and as pinup models — and now, a new art project created by activist Danielle Sepulveres and illustrator Maritza Lugo features Disney Princesses going to the OB-GYN during Trump's presidency (and, for that matter, Mike Pence's vice-presidency). The point? The project shows how well-known characters like Pocahontas and Belle would likely be affected in an America where the Affordable Care Act is repealed — thereby underlining how devastating repealing the ACA will be. Sepulveres tells Bustle, "Juxtaposing [the popularity of Disney Princesses] with a more serious topic seemed to me like it might be a strong way to make an audience pay closer attention to women’s health care."

The art series is a continuation of a set of illustrations that Sepulveres and Lugo first developed in January of 2016, when they re-imagined Disney princesses going to the OB-GYN for Cervical Health Awareness Month. It was initially Sepulveres's idea; after searching for projects drawing attention to cervical health online and finding nothing, she contacted Lugo to see if she was interested in bringing the series to life visually to address the current political climate in the United States. Together, they brainstormed every illustration. For both projects, Lugo used a Wacom Intuos drawing tablet and Adobe Photoshop to make the drawings.

Like last year's project, this year's is also intended to draw attention to Cervical Health Awareness Month. "We knew we wanted to do something new for Cervical Cancer Awareness Month again solely because of all the people who reached out to us last year saying the project was a great reminder to go to Planned Parenthood or their doctors and get a pap and/or cancer screening," Seuplveres says.

This time, however, the project is taking one step further not only to show Disney Princesses visiting the OB-GYN, but also showing how contraceptives, vaccines, family planning, and other health care services could become too expensive or even unavailable under Trump's administration.

For instance, one of the illustrations shows Ariel speaking with suited man, likely a Republican politician who opposes the Affordable Care Act or plans to cut funding for organizations like Planned Parenthood. This is particularly powerful considering Ariel's story in The Little Mermaid, where the villain Ursula literally takes her voice away. This illustration expresses the urgency in refusing to be silent in the face of government policies that threaten to limit or destroy our rights.

"This year we want people to listen, to pay attention to the millions of people explaining what happens to their health if they cannot access health care coverage," Sepulveres says. "We want everyone who sees this to know that they don’t have to be silent, that there are so many others who feel the same way or are in the same position. We also want to point out that there are many who are willing to stand up and be an ally for those who need the support." In our current climate, people are afraid their voices won't be heard — and, as Sepulveres puts it, "the lives of constituents matter far less than winning a sandbox fight between two political parties."

For people of color who don't have regular access to health care, Trump's policies and recent executive orders (such as the Mexico City Policy, AKA the Global Gag Rule, which dramatically affects abortion access) adds even more fear to the reality, Luga tells Bustle. The project incorporates several Disney Princesses that come from different backgrounds, including Disney's first and only black princess, Tiana, to highlight the additional barriers for women of color.

Another illustration shows Elena of Avalor, Disney's first Latina princess, getting harassed by anti-choice protesters, depicted as the evil stepsisters from Cinderella; they sport "Defund Planned Parenthood" t-shirts and carry signs telling Elena to "go back to your country." "I think there's this notion of women taking care of others but rarely themselves. For me personally, I think there is very much so a war on women. People scoff and ask, 'What rights don't you have?'" Lugo says. "But if we get down to it, we have the Trump administration and the GOP trying to regulate a woman's right to choose, or her body."

Ultimately, Lugo and Sepulveres hope that the art project reminds people that it's dangerous to normalize Trump's and Vice President Mike Pence's proposed policies or get complacent during the next four years. "Our message is, 'Don’t be complacent, fight for your rights and we’ll fight with you. Health care is a right, not a privilege,'" Sepulveres said.

More like this
Try These 3 Manifestation Rituals To Feel Healthier Than Ever
By Brittany Beringer
Wimbledon Alters All-White Kit Rule Amid Candid Period Discussions
By Catharina Cheung and Rachel Mantock
Iran Has Issued A Death Sentence Over Mahsa Amini Protests
By Catharina Cheung, Darshita Goyal and Maxine Harrison
How To Switch Back To A Personal Instagram Account From A Professional One
By Alexis Morillo
Get Even More From Bustle — Sign Up For The Newsletter