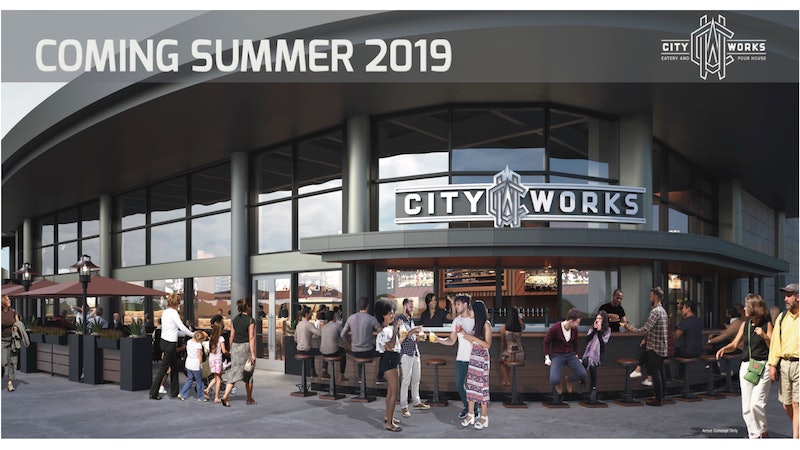 If you like your nights out to have a little Disney magic, good news: A new location of the City Works Eatery & Pour House is coming to Disney Springs at Orlando, Fla.’s Walt Disney World Resort in 2019. A massive sports bar with 80 beers on tap and a menu featuring American bar favorites, City Works will take up real estate in the West Side of Disney Springs — and the best part is that you don’t have to be a Disney World guest to visit it: Disney Springs is free to enter, so as long as you’re in the Orlando area, you can have one heck of a Disney night out without even setting foot in one of the parks.

Disney Springs is the latest iteration of Walt Disney World’s shopping, dining, and entertainment destination. Originally opened in 1975 as the Lake Buena Vista Shopping Village, it’s been renovated and branded a number of times over the years; it became Walt Disney World Village in 1977, Disney Village Marketplace in 1989, and Downtown Disney in 1997. The Downtown Disney '90s rebrand was pretty major, bringing with it additions like the resident Cirque du Soleil show La Nouba and the now-defunct indoor amusement park DisneyQuest — but in 2013, an even more ambitious project was announced: Over the next three years, Downtown Disney would be renovated yet again, creating four distinct neighborhoods connected with flowing waterways and doubling the size of the district.

The area relaunched under the name Disney Springs in 2016 — and although there’s plenty of shopping and entertainment to be had there, it’s mostly known for its dining scene. Between themed restaurants like the Indiana Jones-inspired Jock Lindsey’s Hangar Bar, well-known favorites like Bongo’s Cuban Cafe, and dessert destinations like Amorette’s Patisserie… well, to say that there’s literally something for everyone would not be an exaggeration. New options are constantly arriving, too. Guy Fieri’s Chicken Guy! restaurant made waves when it opened at Disney Springs this past summer — and now City Works is coming to the roster.

Counter to Disney Springs’ relatively long history, City Works is quite a recent institution — its first location opened in Minneapolis, Minn. in early March, 2016, with six more spots in a variety of other cities following in quick succession over the next two years. City Works’ main selling points are the space, the screens, and the selection: Each location offers, on average, 9,000 square feet of space, approximately 15 huge, flat-screen TVs broadcasting various sports games at all times, and somewhere in the neighborhood of 90 different beers on draft, many of which are craft and/or local. Given the rate of growth, it’s a formula that seems to work; two locations in Illinois are on the way — and the Disney Springs news is huge.

According to the Orlando Sentinel, the Disney Springs branch of City Works will occupy an 8,632-square-foot space in the West Side area of the district. Like its sibling locations, it will be full of high-definition televisions — including, notes the Disney Parks Blog, one screen that will measure a whopping 165 inches — along with around 80 beers on tap. Per the Disney Parks Blog, these beers will include “rare, limited supply, special tappings from local breweries and others from around the world.” A curated selection of wine will also be on the menu, as well as bar food like burgers and ribs. The Orlando Sentinel reports that entrees will run $13 to $20 during lunchtime and $15 to $28 at dinner.

The restaurant will also be adjacent to the NBA Experience, an interactive sports complex that’s moving into the space formerly occupied by DisneyQuest (side note: If you're interested in the whole DisneyQuest thing, YouTube channel Defunctland has an excellent video about its history). Paired together, the NBA Experience and City Works create a sort of incredibly souped-up version of ESPN Zone, the Disney-run arcade, entertainment center, restaurant, and sports bar hybrid that operated locations both on and off Disney property from 1996 to 2018. The last remaining ESPN Zone was located in the Downtown Disney District at the Disneyland Resort in Anaheim, Calif.; it closed during the summer of 2018 to make way for a new hotel.

But although the actual chain is gone, its spirit seems to remain: The NBA Experience and City Works are both set to open during the summer of 2019. Get ready, sports fans!

More like this
8 TikTok Pasta Recipes To Try Out At Home
By Emma Garza
Starbucks’ Chocolate Cream Cold Brew Tastes Like This Retro Candy
By Emma Garza
TikTok’s “Miley Stewart Summer” Trend Will Make You So Nostalgic
By Courtney Young
Remember These Ancient Pieces Of '90s Tech?
By Lucia Peters and Emma Carey
Get Even More From Bustle — Sign Up For The Newsletter