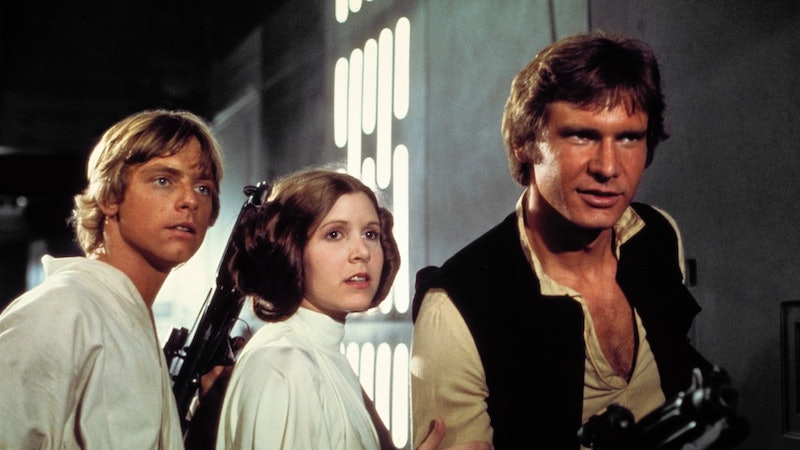 Move over, Baby Yoda; there could be more adorable Star Wars content on the way: a new kids' game show called Star Wars: Jedi Temple Challenge is headed to Disney+ in 2020. The upcoming game show aimed at children will test contestants’ abilities in the "core Jedi principles of strength, knowledge, and bravery as they face thrilling and fun obstacles,” as per Deadline. The competition series will be hosted by Jar Jar Binks actor Ahmed Best, who voiced the beloved Gungan species in Star Wars: Episode I – The Phantom Menace and other Star Wars films.

“This is definitely a kids game show like no other,” Mickey Capoferri, Lucasfilm’s senior director of online content and programming, said in a Dec. 3 press release. “The various challenges will test a Padawan’s connection to the Force in three locations — a forest planet, on board a Jedi star cruiser, and inside a Jedi Temple — immersing them and the audience in a fun, humorous, and exciting competition.”

According to the Star Wars: Jedi Temple Challenge press release, Best will be joined by a “hilarious humanoid droid companion” voiced by Veep actor Mary Holland. Disney’s statement said of the host, “Best’s unique set of skills as an actor, dancer, martial arts expert, STOMP musician, and Star Wars fan make him the perfect choice as the show’s host and mentor.”

The series, set to be executive produced by Lucasfilms, will be the first of its kind for the Star Wars brand largely focused on films and scripted TV series. Jedi Temple Challenge will join a roster of various current and upcoming Star Wars programs on Disney+, such as The Mandalorian, which introduced Baby Yoda to the world upon its debut, and an upcoming Obi-Wan Kenobi series, which will star Ewan McGregor. An official series title and release date has not yet been announced for the latter. J.J. Abrams’ Star Wars: The Rise of Skywalker is also due out in theaters on Dec. 20.

On Twitter on Tuesday, Best confirmed his hosting duties with a heartfelt tweet. “In my most challenging times, it was always the smiles and energy of kids that loved #jarjarbjnks who lifted me up,” he wrote. “Thank you for this opportunity to give back to them.”

Star Wars: Jedi Temple Challenge will be available exclusively on Disney+ next year.

More like this
'Bachelor' Star Cassie Randolph’s Sister Is In The 'Yellowstone' Spinoff '1923'
By Grace Wehniainen
At 28, Rosie Perez Risked Her Career To Stop Playing Stereotypes
By Gabrielle Bondi
Here’s Everything Coming To & Leaving Netflix In February
By Jake Viswanath
Adam Ali Hopes 'Waterloo Road' Will “Subvert” Queer Misconceptions
By Sam Ramsden
Get Even More From Bustle — Sign Up For The Newsletter
From hair trends to relationship advice, our daily newsletter has everything you need to sound like a person who’s on TikTok, even if you aren’t.