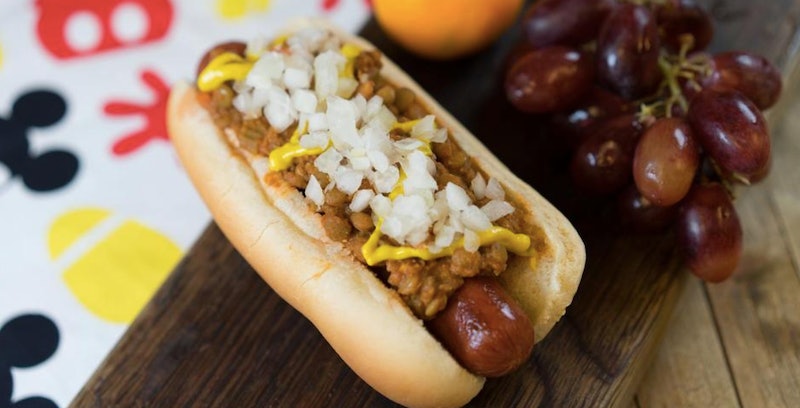 Vegans and Disney fans of the world, it's time to rejoice — Disneyland may be the unexpected safe haven you never dreamed could really exist, a place where Minnie Mouse and jackfruit combine. PETA — or People For The Ethical Treatment Of Animals — recently named Disneyland "America's Most Vegan-Friendly Amusement Park". So if you hate dairy but love rides, you may want to hit up Disney on your next vacation. “Disneyland has become the ‘Happiest Place on Earth’ for young vegans,” PETA Director of Student Campaigns and Influence Rachelle Owen said in the announcement and the company pointed to delicious options like jackfruit burgers to show what a huge effort Disneyland has been making.

In fact, they've also released an A-Z of vegan options at Disneyland, so you know exactly what you can enjoy at the park and where you can find it. "Many people don’t realize that Disney is a treasure trove of vegan-friendly fare," PETA's website explains. "With our handy A to Z guide to finding vegan options at both Disneyland and Disney California Adventure Park, you can enjoy the day (or week!) knowing that you have far more choices than just French fries." Though, why would you ever skip a side of fries? As a vegan, they are pretty much my lifeblood.

If you want to get a sense of just how delicious some of these options might be, PETA released a video of Vegan Food at Disneyland With Aubrey Miller, where Miller goes to try all of the vegan options in the park. From vegan Mickey waffles to vegan gumbo, there certainly seem to be a hella lot of vegan options on offer — although you need to request for many of them to be vegan, rather than order straight off menu. Still, it's nice to see something other than cauliflower steak because, repeat after me, a slice of cauliflower is not a damn meal.

So much has changed on the vegan scene in the last 10 years or so — but things have really exploded just in the past year or two. It's amazing to see huge companies like this taking the needs of us hungry vegans on board, because a lot of us hate dairy, but effing love bread and want to be offered something more than celery to eat. If Disneyland isn't in your neck of the woods, Epcot in Florida, Universal Studios Hollywood, and Cedar Point in Ohio also received honorable mentions from PETA for their vegan efforts.

And of course, other big names have also taken up the vegan challenge. Panera has a new vegan soup, Magnum has vegan ice cream bars, and Halo Top has more vegan flavors. More and more, you can find vegan options anywhere you want to eat, rather than having to seek out a place that caters to vegans specifically. While all of these new vegan developments are welcome, there's something really important about family destinations, like Disneyland and Cedar Point, making changes. Days out can be miserable if you're trapped somewhere with nothing to eat but plain potato chips or someone's extra pickle, so having actual options can be a total game-changer, especially if you're with your family. You definitely don't want the extra stress of being hangry on top of the family drama.

Well done, Disney, proving you can be the happiest place on earth — even for us vegans.