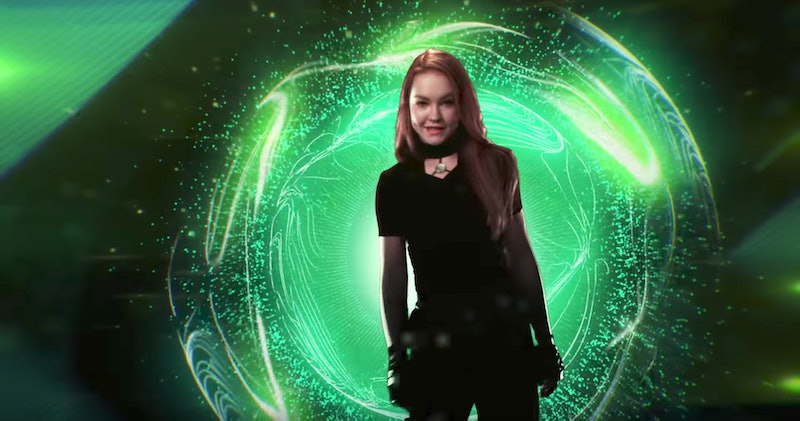 Here's the sitch: Everyone's favorite high school super spy, Kim Possible, is returning to the small screen for a live-action Disney Channel Original movie, and the first teaser trailer for the live action Kim Possible will bring you right back to your middle school memories of watching Kim fight trouble before cheerleading practice.

Though the teaser only offers the briefest look at the beloved spy back in action, that hasn't stopped some Kim Possible fans from being super excited about the trailer. But many fans are also wondering why we haven't seen two very important characters — no, not Ron Stoppable (to be played by Sean Giambrone) and Rufus, the naked mole rat — but Kim's arch-nemeses, Shego and Drakken.

The fifteen-second clip shows star Sadie Stanley, ready to face off danger and trouble on the double, while everyone's favorite Disney theme song plays in the background (minus, sadly, Christina Milian's iconic vocals, which will hopefully make their return when Kim Possible airs in 2019). Set against the show's famous green and black logo, the trailer gives fans an up-close look at Stanley's updated spy uniform — though her black turtleneck and green cargos remain unchanged — as well as plenty of intimidating shots of her ready to jet off to fight evil as soon as her pager beeps.

Deadline revealed back in May that 12 Monkeys star Todd Stashwick and Taylor Ortega would take on the roles of the dark and sassy villains, but Disney has yet to reveal any hints about what the live action version of those iconic characters will look like on the small screen. Obviously, that has left some fans very concerned about how their favorite tween show will translate to a 2018 adaptation:

Yes, it turns out that everyone loves a good villain, especially a badass lady with amazing flowing hair. Need further proof? Take a look at all of the Kim Possible fans who aren't rooting for the titular super spy in this live action iteration, but are instead hoping that Shego succeeds in executing her evil plans and defeating Kim Possible this time around:

While the swell of fan support for Shego might be surprising to some fans who always rooted for Kim and Ron to best the evil masterminds, it's not surprising that most people who watched the show would remember her over Dr. Drakken. Sure, he was ostensibly the genius behind all of the show's most dastardly plots, but without Shego by his side, he wouldn't be particularly intimidating. With her superior fighting skills, her witty one-liners and her determination to make all of Drakken's plans even more evil, it was clear to everyone who watched the show that Shego was always meant to be Kim's true antagonist.

Besides, Shego had great hair and the ability to shoot green energy out of her hands — who wouldn't be obsessed with a villain like that?

The live-action Kim Possible film, which will be titled What's the Sitch? in honor of Kim's iconic catch phrase, will presumably see Kim and Ron face off against Shego (and Dr. Drakken) in an attempt to save the world while balancing high school classes. The film will also bring back a few other beloved characters from the animated series, including 10-year-old computer genius Wade (to be played by Isaac Ryan Brown), Kim's surgeon mother, Dr. Ann Possible (who will be portrayed by Alyson Hannigan) and Kim's cheerleader frenemy, Bonnie, played by Erika Tham.

Most excitingly, on Saturday, Aug. 11, Entertainment Weekly revealed that two of the show's original stars, Christy Carlson Romano and Patton Oswalt, will also appear in the live action adaptation. Though it hasn't been revealed who Oswalt — who voiced villain Professor Dementor — and Romano will play, but it's safe to assume that Romano's role will likely honor her original performance as Kim Possible herself. The actress was even involved in Disney's casting announcement of Stanley and Giambrone as the new Kim and Ron, where she officially passed the baton to the newest generation of high school super spies.

Though the DCOM doesn't have a specific premiere date as of yet, the teaser trailer promises that we can once again call or beep Kim sometime in 2019.