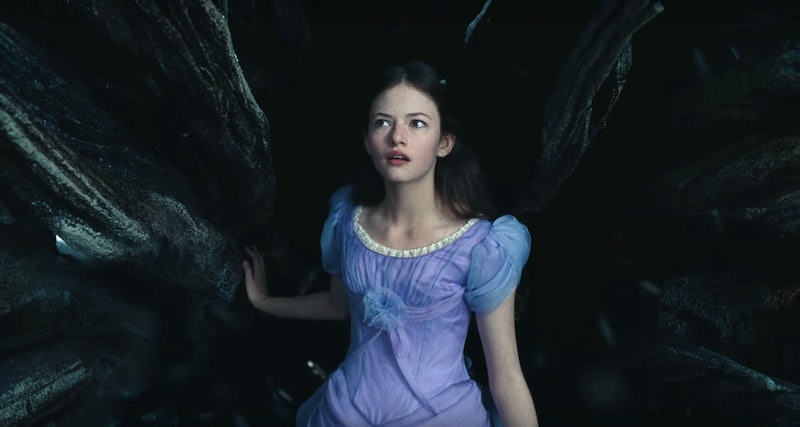 Christmas 2017 isn't even here yet, but Disney is already thinking ahead about how to make 2018's holiday season one to remember. The studio's The Nutcracker and the Four Realms trailer, released on Tuesday, seems to put Beauty And The Beast in the middle of Santa Claus' winter wonderland, and its suspenseful edge will keep you on the edge of your seat.

The classic holiday tale of a young girl's mystical adventures with a nutcracker received a slight makeover, including inspirations from the famed Nutcracker ballet in the new adaptation. Here, Clara, played by Mackenzie Foy, is in search of a key that will unlock a gift from her late mother, initiated by her godfather Drosselmeyer, as played by Morgan Freeman. Drosselmeyer's role seems to be a little different in this film than in former adaptations.

The trailer hints that the craftsman may have had a hand in crafting Clara's extravagant scavenger hunt. In the midst of recovering the key, Clara ventures through four alternative universes, or realms, in which she encounters the Sugar Plum Fairy (Keira Knightley), and the Fourth Realm's ruler Mother Ginger (Helen Mirren).

Clips of the film's star floating through the majestic castle, including the stunning ballroom scene preview, definitely gave off some live-action Beauty and the Beast vibes. Similar to Beauty and the Beast's cinematics, The Nutcracker and the Four Realms' trailer puts fans directly in the core of Clara's experiences — making the fantasy world feel that much more real.

The studio mentioning the box-office hit in the trailer potentially prove that the creator's totally drew inspirations from it on purpose. And just as the newest Beauty and the Beast adaptation brought some modern surprises to the big screen, like Belle's unwavering feminism and LeFou's sexuality being on display, there's no telling what exciting upgrades are lurking on the other side of the two-minute sneak peek.

Adding to the star-studded cast, mentioned previously, are actors Eugenio González Derbez, Jack Whitehall, Miranda Hart, and American Ballet Theater's Misty Copeland joins the cast as, what appears to be, a lead in a dance number shown in the trailer. The roles that González Derbez, Whitehall, and Hart fulfill in the movie have yet to be confirmed, but it's being reported that newcomer Jayden Fowora-Knight will take on the role of a soldier named Phillip, who assists Clara on her search for the key.

Of course, apprehension surrounding the live-action adaptation is totally understandable. Oh, and the addition of the mysterious four realms, giving the Christmas staple a bit of a Tim Burton edge, may raise some eyebrows too. After all, The Nutcracker is a classic. But there's no doubt that the folks over at Disney are the right people to showcase the iconic story in a brand new light.

Sill need some convincing? Well, let magical workings of their live-action Beauty and the Beast serve as some consolation. For a lot of fans, the remake made a lot of their inner children weep happy-nostalgia tears. And The Nutcracker and the Four Realms is bound to do the same.

The film isn't set to be released until Nov. 2, 2018, and though the anticipation may be killing, just knowing that the live-action is in the works is a present within itself. From the looks of the preview, the project seems to be beautifully complex, and Disney should totally take its time with perfecting every moving piece. And seeing as Disney is known for releasing more than one trailer for their productions, it's safe to bet that this particular preview is going to be the first of many. In other words, fans can look forward to having bits and pieces of the production pop up throughout the next year.