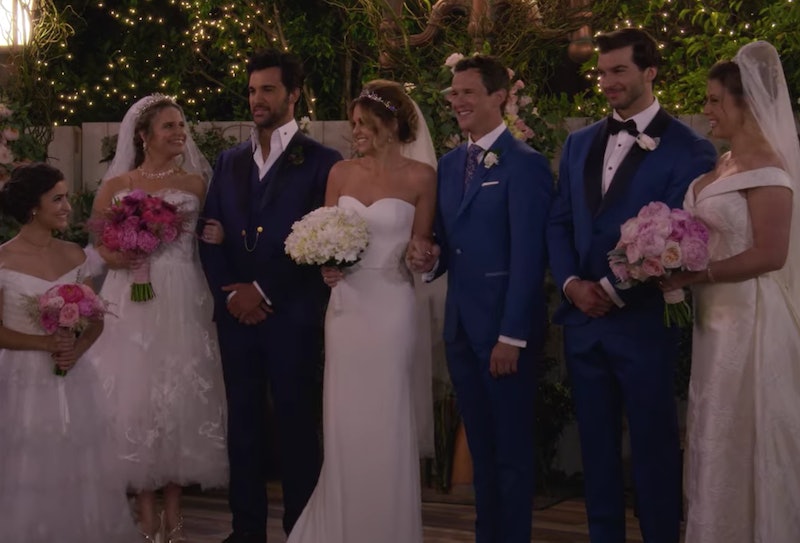 Spoilers ahead for the Fuller House series finale. DJ, Stephanie, and Kimmy's Fuller House wedding didn't exactly go as planned. On the morning of the big day, their venue was seized by the FBI, their pastor dropped out, and pretty much everything else that could have gone wrong did. But they ended up with something much more fitting: a ceremony in the backyard of their iconic San Fransisco house officiated by New Kids on the Block's Joey McIntyre.

The triple wedding also reunited a number of characters from earlier seasons and the original show. This included Fuller House characters like Romona's ex Popko, Jackson's ex Lola, and Steve's ex CJ (who he almost married before running out on her during the ceremony). DJ's ex Viper from the original series was also there, as was Stephanie's ex Harry Takayama (who was recast as actor Michael Sun Lee); DJ's Fuller House ex Matt, who's now dating Stephanie's childhood friend Gia; and Danny's Full House ex Vicky, who he became friends with in Fuller House Season 3 after breaking off an engagement in the original show. Even Kimmy's ex Duane, who she almost married on Full House, turned up to deliver his signature line: "Whatever."

But it wasn't just all of the character returns that made the wedding so special for longtime fans. We also got to see Steve and DJ finally get married after watching them fall in love as teenagers on Full House. "Steven Hale, when we met as teenagers you were kind and funny and so handsome, but I never could have anticipated the really great man you would become," DJ said in her vows. "I love you, I cherish you, and I can't wait to begin the next chapter of my life with you."

The scene of the three "dads" (Danny, Jesse, and Joey) walking DJ, Stephanie, and Kimmy down the aisle was also a tearjerker for those who watched them work together to raise the Tanners. Ultimately, the wedding was a sweet, understated homage to Full House and the Fuller House characters that brought it back to life. It's weird that so many of their exes showed up, but as they say, the door is always open.