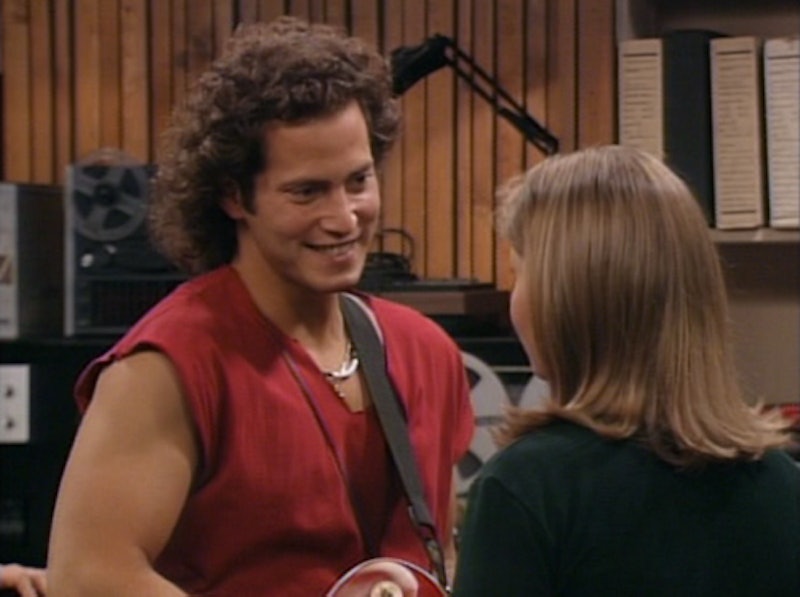 All Full House fans remember DJ's boyfriend Steve. How could they not? DJ and Steve were the ultimate '90s couple, Steve appeared on the series for three seasons, and (19-year-old spoiler alert, I guess?) is the guy that DJ ended up with, thanks to a surprise appearance in the series finale. But in Full House's final season, while she and Steve were broken up, DJ dated Viper, and he deserves to be remembered too. So what happened to Viper after Full House ? He's actually doing a lot better than you'd expect and, well, let's just say he's only gotten better with age.

Even though he was only on Full House for one season, Viper was at the center of quite a few storylines. First, Danny and Uncle Jesse didn't approve of his and DJ's relationship, because, as a member of Jesse & The Rippers with a tattoo and penchant for leather, he was clearly the "bad boy." But because it's Full House, Viper was revealed to be a really nice guy on the inside (never judge a book by its cover, kids) and he and DJ began a relationship.

Soon, another guy began pursuing DJ, who happened to be Viper's complete opposite — DJ's non-Steve ex-boyfriend, Nelson. DJ and Viper break up, she dates Nelson again, then realizes she likes Viper too, and when forced to pick between them, chooses neither (you go girl).

In the series finale, Steve shows up to take DJ to her prom and the two live happily ever after. Anyway, let's fast-forward to 2014. DJ just finished Dancing with the Stars, Steve is writing for TV sitcoms, and Viper is still acting, but also has another job.

Viper's name is actually David Lipper, and he didn't have any notable roles before his 1994 Full House debut. Since then, however, he's maintained a steady acting career, guest-starring on TV shows like NCIS, Ghost Whisperer, and The Young and the Restless, in addition to appearing in a variety of films. Most recently, Lipper was seen in Lifetime's Non-Stop opposite Mean Girls star Lacey Chabert and Two Jacks, which premiered at the Montreal Film Festival. He also filmed the romantic comedy Love by Design with Jane Seymour, set for release later this year. So how will you be able to spot Lipper as he continues popping up in various projects? Here's what he looks like more recently — in 2011 to be exact.

I told you he aged well.

And since Lipper's acting history has some gaps, he's also sought work elsewhere. According to a 2012 interview with Young Hollywood, he owns several locations of the Menchie's frozen yogurt chain. It's a way for Lipper to ensure he has steady income, even during times when film and TV roles are hard to come by. However, it seems Lipper doesn't have any cause for concern right now.

A June 2014 post from his website reveals that this year alone, Lipper has filmed Dying Of The Light with Nicolas Cage and High Strung with Jane Seymour, and has recently begun work on the History Channel miniseries Sons of Liberty. Here's a photo from the set posted to Lipper's Facebook page just a few weeks ago. If you were hoping to see him with a hairstyle more reminiscent of Viper, you're in luck.

With so many acting projects in the works and a reliable fallback gig, Lipper is doing pretty great these days. Maybe DJ should've chosen Viper after all.

More like this
The First Trailer For 'That '90s Show' Includes So Many Nods To The Original Series
By Jack Irvin, Alyssa Lapid and Grace Wehniainen
'Gilmore Girls’ Lauren Graham Just Revived Our Hopes For A New Reunion
By El Hunt
Kate Winslet To Star In Russell T Davies' 'Dark Season' Revival
By Sam Ramsden
'Bel-Air' Season 2 Finally Has A Release Date & A New Trailer
By Brad Witter, Kadin Burnett and Sam Ramsden
Get Even More From Bustle — Sign Up For The Newsletter