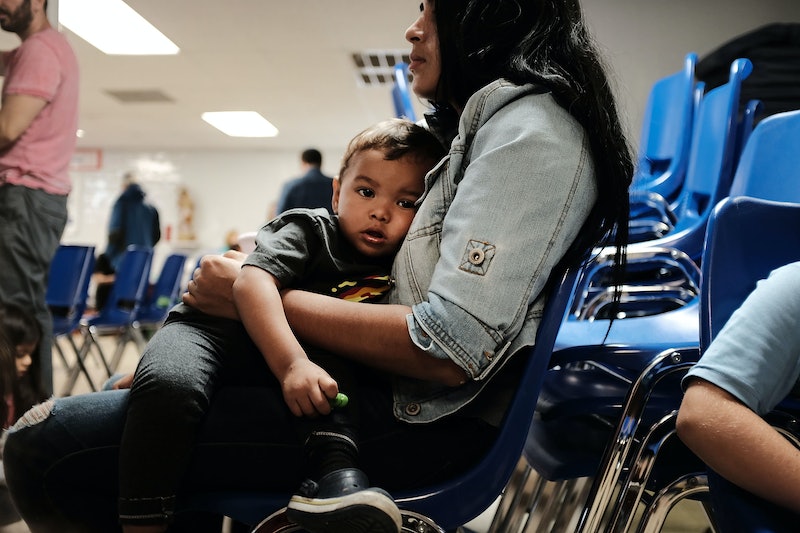 The Trump administration has been scrambling to reunite the families it separated under its "zero-tolerance" policy for weeks now. A new report says that not only is the government DNA testing immigrants who were separated from their kids, but officials have told have told at least four women that they had to pay for those tests in order to be reunited with their loved ones. Advocates for separated immigrant families as well as DNA experts also are raising alarm bells about this practice.

The Daily Beast spoke with an El Paso, Texas, shelter that housed the women who say they were asked to pay for the DNA testing. Ruben Garcia, the director of the shelter Annunciation House, explained to the publication why this poses a huge problem.

“None of them have the money [for the tests], so it’s going to fall back on us to push back on that,” Garcia told The Daily Beast.

Apparently three of the women are moms attempting to reunite with their children, while a fourth is a sister looking for her three-and-a-half-year-old little brother. This all comes after the Trump administration missed a court-ordered July 10 deadline to reunite all the detained immigrant families with separated children under the age of five.

An immigration attorney who works with Annunciation House, Iliana Holguin, also alleged to The Daily Beast that the government made a few of her clients pay between $700 and $800 to prove familial ties in their citizenship cases.

The Department of Health and Human Services (HHS) previously announced that the Office of Refugee Resettlement (ORR) would use DNA tests to make sure family members were brought back together. The ORR, which is in charge of DNA testing, told The Daily Beast that it “provides DNA testing at no cost to verify parentage," even though the publication found that an undisclosed private contractor conducts the actual tests.

Using DNA testing on separated immigrant families at all has proven to be controversial, coming with a host of privacy concerns. One advocacy organization, RAICES Texas, told USA Today that the use of DNA data could put the personal information of both minor children and their asylum-seeking parents at risk. They worry it could fall into the hands of law enforcement and immigration officers.

Dr. Ruth Ballard, a forensics DNA expert and professor at California State University Sacramento, told USA Today that “Anytime you give your DNA to a third party you’re potentially giving up a lot of information about yourself.”

In a statement, HHS tried to reassure immigrants and their advocates alike by saying that “a DNA test is done only when there is a specific parent-child relationship that needs to be validated. It will be used only for this purpose."

The DNA testing is required in some cases in order for the ORR to release children in its custody to parents who will face either parole or deportation. But Garcia, the shelter director, told The Daily Beast that he thinks this is due to officers with Immigrations and Customs Enforcement or Customs and Border Protection officers seizing paperwork that proves family relations when they detain immigrants.

Neither ICE nor Border Patrol have commented on those claims so far, but this new report may metaphorically turn up the volume on the already loud calls to abolish ICE. In fact, Democratic Rep. Mark Pocan of Wisconsin has already proposed a bill to get rid of the controversial agency.

Perhaps Holguin said it best. “The government wants the parents to foot the bill for the DNA testing when they’re the ones that caused the need for DNA testing,” she told The Daily Beast. “It’s incredible.” Basically, things at the border are a mess right now, and families are experiencing emotional pain that experts say could have been prevented.