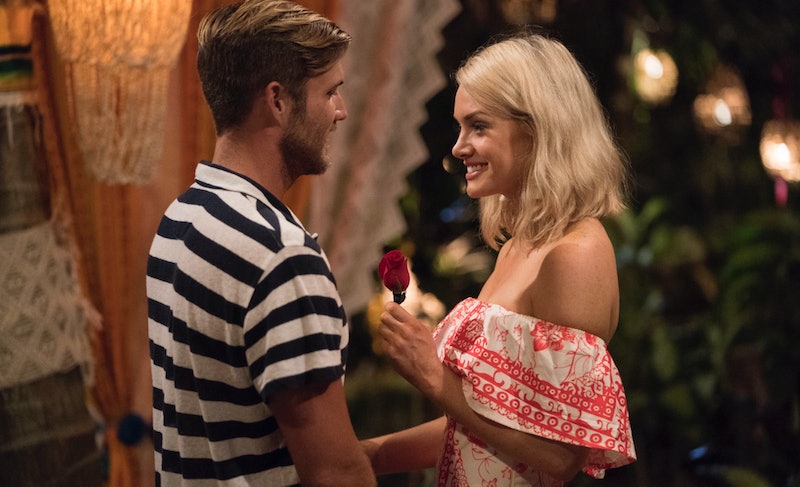 They got engaged at the end of their Paradise journey, though both were visibly nervous throughout the exchange. The ring Jordan chose for Jenna was undoubtedly a stunner, as to be expected. When they arrived on the reunion special, they told host Chris Harrison that though it was difficult to go from seeing each other every single day in Mexico to relying solely on FaceTime calls and text messages, they were still going strong. Bonus footage showed Jordan and Jenna visiting each other in one of their homes, putting away groceries, and just hanging out like they'll do if their relationship truly goes the distance.

They teased that they'd been talking about kids, and Jordan even asked Harrison if he'd officiate their wedding — apparently, they've already set a date for next year. So in the words of Napoleon Dynamite's cousin Kip, I guess you could say things are getting pretty serious.

If their proposal was any indication, these two are truly head over heels for one another. Jenna has typically seemed a little more skittish than Jordan throughout the season — breakups among other contestants really shook her, and she didn't seem altogether ready to commit in the last episode. But as always, Jordan's words seem to calm her. And say what you want about Jordan, but he definitely does have a way with words.

"Since you walked into Paradise I thought you were the prettiest girl in the world," he told Jenna just before he proposed. "You’ve taught me to believe in love at first sight. Fighting for you was the most confident thing I’ve ever done … You’ve truly made me the lucky one and I can’t wait to build a family and make all of your dreams come true. I’m a one gal type of guy, and that one girl for me is you."

The ring is beautiful, that's for sure. And throughout Paradise, Jordan has only had eyes for Jenna, even since the first moment she arrived. But only time will tell if this duo will withstand the test of time. Jordan definitely seems dedicated, and regardless of what you think of his over-the-top, charismatic personality, he doesn't seem like the type to lie about his feelings or pull someone into an unnecessarily hurtful situation — here's looking at you, Kamil.

And Jenna, though she might not articulate it as much as Jordan, has definitely seemed like she's had butterflies in her stomach for him for a while. But the real world off camera offers its own set of obstacles. Hopefully what they forged together in Paradise will lend the tools Jordan and Jenna will need to be in this relationship for the long haul.