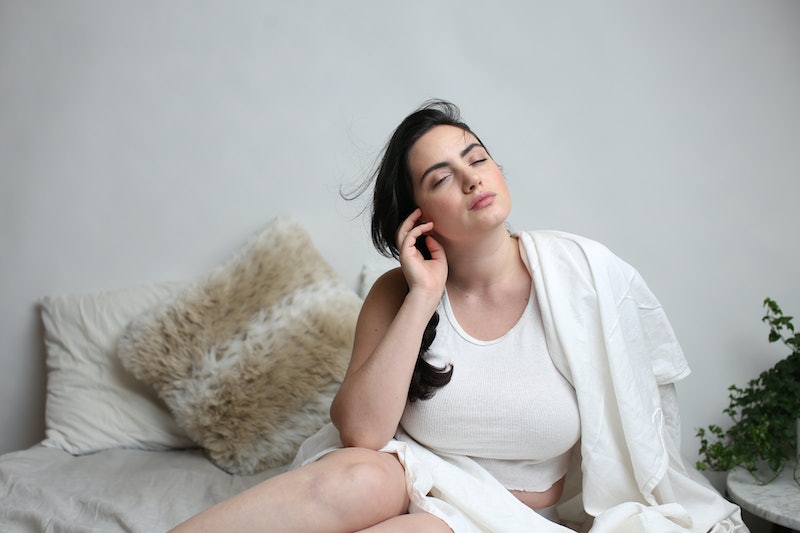 Sex is supposed to be enjoyable, yet only about half of women orgasm when they have sex with a partner, so it's natural to seek advice about how to get off during sex. A common tip for a better orgasm is to switch your thoughts off and just go with the flow. Struggling to reach orgasm is often blamed on having an overactive mind, and experts often say our brains need to shut down to let go of inhibitions and really enjoy getting down. But, according to a new study from Rutgers University published in the Journal of Sexual Medicine, our current thought process about orgasms is all wrong. Researchers found women don't have to switch their brains off to orgasm after all.

Here's how the study worked: Women who participated in the study agreed to orgasm inside of a functional MRI scanner (and people say romance is dead). Lead researcher Nan Wise tells New Scientist that reaching climax in a "noisy, claustrophobic and cold" space is pretty difficult. Participants also wore head and neck brace stabilizers to control for head movement during orgasm, since you have to remain as still as possible during an MRI. The women could only move 1.3 millimeters (that translates to 0.05 inches), but they still managed to reach orgasm. This study was one of most comprehensive studies on orgasming and the brain's response, and it's the first study to use an fMRI scanner to study orgasms.

The Rutgers team looked at the brains of participants during the first 20 seconds of orgasm and compared it to the brain immediately before and after climax. The scientists didn't see any region of the brain deactivating or "turning off" during orgasm. In fact, the subcortical region of the brain, which includes the hippocampus and amygdala and controls functions like memory, decision-making and emotions, reached peak activity during orgasm. The same is true for the brain stem, which sends messages from the brain to the rest of the body, and the cortical region, which helps us process sensory information. Basically, the study found that our brains are actually more active when we're experiencing orgasms.

The Rutgers study does have some limitations, however. The sample size was small, with only 10 women participating, so the results can't be generalized to the entire population. Also, researchers only examined clitoral stimulation during the study, so they didn't look at the numerous other ways women can reach orgasm. Still, it suggests our current approach toward orgasms may be incorrect.

So what does this mean for women? If you're overthinking during sex, you can still psych yourself out, but it's normal to be thinking during sex and as you orgasm. (It's even normal to think about other people.) Your brain is working harder as you enjoy yourself.

The Rutgers team hopes that their findings can help doctors treat conditions like anorgasmia, a disorder where you can't achieve orgasm regardless of how sexually stimulated you are. This is encouraging news for anyone who has trouble reaching orgasm as scientists continue to study the brain's role in sexual arousal. The next time you're getting busy, don't worry about turning your brain off. Your brain is getting busy, too.