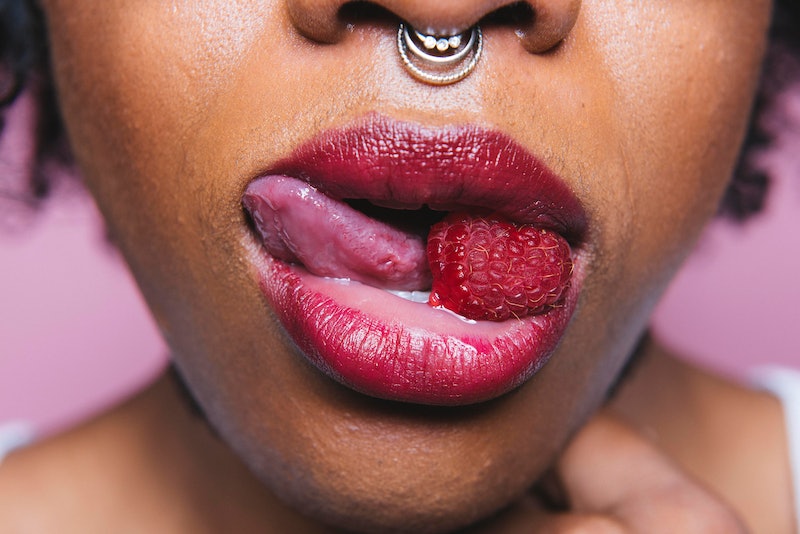 Whether you love it or hate it, you almost definitely have an opinion about oral sex, especially when it comes to performing oral sex. Sometimes you're into it, sometimes you're not, sometimes it's all about just focusing on trying not to gag if your partner has a penis, and sometimes you just give oral just so you can get some oral of your own in return. Like any other sex act out there, feelings on oral sex can often depend on your mood.

Oral sex is complex. Oral isn't just about the physical sensations at play, but other factors too. For example, there is a complicated power dynamic and a vulnerability that are at work during oral sex.

Sometimes, the person on the receiving end of oral sex is being pleasured, but also feels very vulnerable. Meanwhile the giver, though performing an act that usually won't provide them with any direct physical pleasure, holds almost all of the power in the situation. For some people (even those who don’t particularly care for the act of oral sex), it’s that power imbalance of it that gets them off ― further proof that sex is not just physical, but also about our emotional impressions and sensations. But other times, that power dynamic is reversed — especially when people feel obligated to perform oral sex on their partner, even though they may not be even remotely interested in doing it.

Then there's the actual "taste" for it, which comes down to technique, methods, secret tricks, and enthusiasm.

If you're not a fan of oral, for whatever reason, then this is something worth discussing with your partner, according to Queen. Sometimes people don't like things because they don't understand them or feel like they might be doing it wrong.

"First, get a sense of what your partner likes most about [receiving oral sex] and what really works for them," Queen says. "This can help you fine-tune what you're doing and it often lets you to feel like you're doing it better. This heightened sense of competence can be a turn-on for some people." Confidence, after all, goes a long way.

Second, remember that you are the one performing oral sex, so you have a major say in the matter, from beginning to end.

"You are the one doing this — it's not being done to you, so explore what you like the most about it and consider what you'd like better," Queen says. "A shower first? Do it! Your partner is thrusting too hard for your comfort? Tell them to stop and receive. Let it be a sensual experience for you, too, not just for them." Oral sex should be enjoyable no matter if you're giving or receiving, or doing both at the same time.

Because there are more than a few reasons why oral sex may be both emotionally and physically complicated, Bustle asked women their thoughts on giving oral sex — to any gender — and their answers didn't disappoint. From a deep passionate love affair with giving oral, to somewhere between disinterest and total indifference, to straight-up disdain for the act all together, opinions on the topic varied quite a bit.

Here are 16 women getting real about their thoughts on performing oral sex — and why they feel the way they do.

"I am not a fan of giving oral sex. I hate it. A lot of guys just expect it. I honestly don't want your genitals in my mouth. Especially if the guy is one of those ones who push the head down and try to force you. Never works. However, I have come across two guys, and two only, that I have had absolutely no problem doing it for. It usually means I'm very, very, very into them."

"I love doing it to my boyfriend! Especially because I know he loves it."

"In this case ONLY, the smaller the penis, the better. I hate gagging while giving head!"

"I actually really love it, and when it's great with a partner, it's a staple. Currently, it's not much of a staple in my sex life, and it really bums me out. It feels like something major is missing. It's not left out of our sex life by my choice, but by his preference (I know it's not for lack of skill on my part!)...he told me he just doesn't enjoy it that much, he said it was the same with his ex-girlfriends, too...I'm happy that he enjoys intercourse, but without head on the table, it definitely can make sex seem stale. I mean, there's only so many ways [you can have sex.]"

"I would be happy to do it if it's someone I am in love with; would adore doing it. But for someone I am not that into, hell no. Having sex and having oral sex are a bit different. Oral sex is little more personal."

"Oral sex, which for me means going down on my boyfriend who has a penis, is something I do because it turns him on. There's no intrinsic fun in it for me, except that I love him and I want to make him feel good, you know? This is probably pure fantasy, but I feel like I would enjoy going down on a person with a vagina much more. I'm bisexual but have mainly dated guys."

"Under the right circumstances I love it ― love the reaction it gets, love the power and gratification that comes from giving someone else pleasure. I also actually like the experience of it, as long as I'm in the mood to be doing it. I also think I like it because, honestly, I've been told by multiple partners that I'm good at it. And it's a pretty big turn-on to be told that, and to go into it with the confidence that you're going to rock somebody's world, as it were.

I think it dawned on me sometime in my 20s how much entitlement there is in our culture regarding male-centric sexual pleasure generally, and blow jobs specifically — and how many times in my life I've personally given head because I felt like it was what I was supposed to do, not because it was what I particularly wanted to do. And needless to say, in most of the situations where I felt that way, I wasn't really enjoying the sex that much. I've come to really chafe at the idea that this is an 'expected' part of sex for men, so while I'm 100% psyched to do it for the right partner, I'm only going to do it if actively want to."

"When my now-husband and I were dating in college, I’d give him blow jobs almost every night of the week. I loved to do it, because I loved him. I still love him, obvs, but I just don’t have a taste — no pun intended — for it anymore. I don’t know what happened (maybe I gave too many back then?), but now he gets one maybe once every six months, if he’s lucky, and I have to be drunk. Naturally, this means he reminds me of those college night blow jobs all the f*cking time."

"Oral sex, for me, is measured by the enjoyment of my partner. I love it when I can tell my partner, male or female, is enjoying it. If I can't tell, I get nervous and flustered and feel sexually inadequate. Hence my general preference for partners who are either verbal or at least use their vocal cords during sex.

When there's silence, and I can't tell if I'm giving pleasure to my partner, it totally takes me out of the moment. I am usually completely unselfconscious during sex (the only time I am ever unselfconscious), but the moment I start to worry that my intuition is not as good as I think it is, I stop enjoying giving oral sex."

"I enjoy making my partner moan and squirm, so in that way, it is fun. On the other hand, I have a very small mouth and a somewhat easily triggered gag reflex, and have met too many dudes that feel entitled to blow jobs, so this is not something I do for guys when we FIRST get together. It is a lot of work for me and quite frankly, I'm not doing it unless I feel I am getting something in return.

In both cases, I tend to prefer it as a warm-up rather than the main event. It's hot to see your partner so turned on, but then I tend to get impatient and want to jump to other things."

"For years, I [avoided] it with my first boyfriend, because there was just a funky smell coming from that part of his body. Like, even when he had just gotten out of the shower. But in my new relationship, there’s no funkiness at all, so I love giving him head. I know he loves it, so I just love it, too."

"My attitude on blow jobs is basically: the spirit is willing, but the flesh is weak. Some days, I feel super confident doing them; a lot of people say it, but it really is a turn-on to see the effect it has on my partner. That said, I have a sensitive gag reflex and a jaw that tends to cramp up, so I usually can't entirely finish him off. Still, it's fun to get him pretty close before climbing on top of him."

"I can’t stop gagging whenever I do it, which is sad because I do love it. I think maybe I don’t relax enough or something. I’d do it more if I could just stop gagging."

"I am actually a big fan! I guess it's because it's kind of playful. I don't feel a lot of pressure, because most guys love them, right? Or at least I've never had a complaint! I guess I just find them fun? I'm not very squeamish about sex, really, and I think it's quite a turn-on to be that intimate. It doesn't bother me if there are fluids involved, because I only put penises in my mouth that belong to guys I find really hot. I think being that intimate with someone is really hot!"

"I actually really enjoy giving blow jobs. There's a power in your sexuality when you give head, and it can be really fun if you embrace it. And if I'm with a good partner, it makes me happy that I'm giving them so much enjoyment. I'm in a long-term committed relationship and we both love giving and receiving, and pretty much start off that way before we have sex every time."

As is the case with any sexual act, you're under no obligation to give your partner oral sex. But if you love it, then go for it. If it's not your cup of tea, then it's not your cup tea, so take it off the menu. Boundaries exist for a reason.

This article was originally published on March 13, 2015