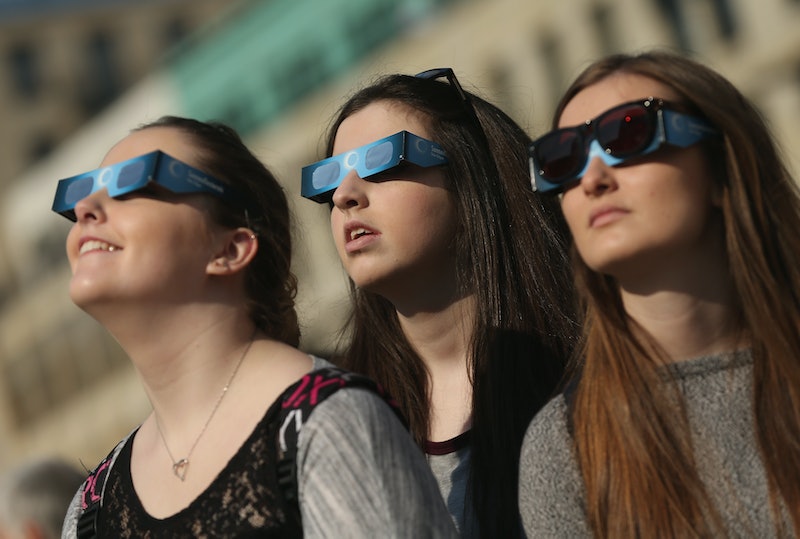 Unless you’ve been completely off the radar over the last week, you’ve probably heard that a total solar eclipse is occurring on Monday, August 21 — the first of its kind to cross the U.S. in almost 40 years. As the date approaches, people around the country are flocking to stores to buy special eclipse glasses in order to safely watch the sun be obscured by the moon. But do you need these glasses, even if you’re not in the eclipse’s path of totality? The answer is yes, and here’s why.

While only a select few cities will be in the cross-section of the continent known as the “path of totality," you don’t necessarily have to live in one of them to see the eclipse. An estimated 390 million people in cities all over the nation will have some view of the solar event, either in partial or total form — meaning you definitely have a chance to see it.

But even if you live in a city outside of the path of totality, that doesn’t mean you get to skip wearing the special glasses. Staring straight into the sun without any protective gear could do major damage to your eyes and potentially cause permanent damage to your vision. So while you may be hard pressed to find eclipse glasses right now (they’ve already sold out in many retailers around the country), that’s absolutely no excuse for not protecting your eyes during the solar eclipse.

If you’re lucky enough to find a pair of eclipse glasses in the remaining hours until the eclipse, make sure they been verified as safe or properly certified.

If you didn’t plan ahead and aren’t among the fortunate ones to snag a pair of glasses, there are plenty of other ways to watch the eclipse safely. Avoid the risk of looking directly at the sun altogether by making your own pinhole projector. You can use either a piece of paper or a cereal or pizza box (as seen below).